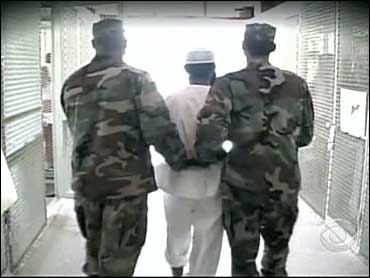 At his news conference Wednesday night, President Obama said once again that waterboarding is torture and that there are other ways, more consistent with American values, to get information from terror suspects.

There was no cleaner break with the Bush administration - on his second full day in office President Obama ordered the military prison at Guantanamo Bay, Cuba closed and renounced harsh interrogation tactics, a decision he defended last night.

"Waterboarding violates our ideals and our values. I do believe that it is torture," the president said during his primetime news conference.

Next he released top secret memos describing methods the CIA used against top al Qaeda operatives like Khalid Sheik Mohammed. We now know exactly how many times he was waterboarded: 183.

But we still don't know if that's the only way he would have talked. How can we know that less coercive techniques couldn't have produced the same results?

"Why would you care? If we get the information we needed and America is better protected, who cares?" replied former CIA officer Michael Scheueur. "These are not Americans."

"You don't need to break our laws and debase ourselves to get the good intelligence," he said.

Even opponents of the coercive techniques like Zelikow acknowledge they can extract valuable information.

"The question is, might alternative methods have given you equal or maybe even greater value in some respects over time?" Zelikow said.

"I don't believe there's any way to use fear productively in an interrogation," said "Matthew Alexander" (a pseudonym) a former interrogator and author of "How to Break a Terrorist."

Alexander was the interrogator who came up with the lead to the whereabouts of Abu Musab al Zarqawi, the most feared and wanted terrorist in Iraq.

"At the time that we were hunting him he was a higher priority than Osama bin Laden," Alexander said. Alexander got the info by persuading a captured al Qaeda operative to cooperate.

"I said to him, 'I want to work with you. I want to give you a role to play in the future of Iraq, together with me,' and he accepted that and together we started to work towards finding Zarqawi," Alexander recalled.

The captive identified Zarqawi's spiritual adviser who was put under surveillance and followed to a house where Zarqawi was spending the night. An F-16 dropped 500 pound bombs and Zarqawi's bloodied body was pulled from the rubble.

"All in all it was about less than three months from the time we started that chain of events to the time we found Zarqawi," Alexander said.

His motto was: "If you use coercion, you'll get a detainee to tell you the location of a house. But if you use cooperation, he'll tell you if the house is booby-trapped."