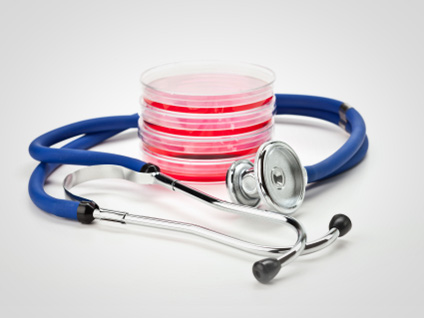 (CBS News) A 10-year-old girl made medical history when a vein created from her own stem cells was transplanted into her body to treat a life-threatening blockage.

The girl had a condition called hepatic portal vein obstruction in which there is a blockage in the vein that drains blood from the intestines and spleen to the liver. A blockage here can lead to major complications like bleeding, developmental delays, an enlarged spleen and even death. Typical treatments include removing veins from other parts of the body - such as the leg - and transplanting them elsewhere to restore blood flow, but the procedures can be risky and have had mixed success.

For the new procedure, the girl was admitted to the Sahlgrenska University Hospital in Gothenburg, Sweden, where a team had already taken a 9 centimeter segment of vein from the groin of a deceased donor. The doctors stripped all cells from the vein, leaving just a tube of scaffolding, which was then injected with stem cells obtained from the girl's own bone marrow. After two weeks in a bioreactor, the graft was re-implanted in the 10-year-old girl, and her condition has been improving ever since.

The medical milestone is described in the June 14 issue of the The Lancet.

"The young girl in this report was spared the trauma of having veins harvested from the deep neck or leg with the associated risk of lower limb disorders," and avoided the need for a liver transplant, explained Dr. Martin Birchall, chair of laryngology, and Dr. George Hamilton, professor of vascular surgery, both at the University College London, U.K., in a commentary published in the same issue.

The girl had no complications from the operation and her blood flow was restored immediately.

In the year since the procedure, the girl has grown from about 4 feet 4.5 inches to almost 4 feet 7 inches and her weight increased from 66 pounds to 77 pounds. However over that year her blood flow decreased and the graft narrowed, requiring a second stem cell-based procedure. She has remained well since the second procedure, taking long walks of up to two miles and participating in light gymnastics. Especially noteworthy is her immune system has not attempted to fight off the donor tissue, despite her not taking any immunosuppressive drugs which often carry side effects.

"The new stem-cells derived graft resulted not only in good blood flow rates and normal laboratory test values but also, in strikingly improved quality of life for the patient," wrote the surgeons, led by Dr. Michael Olausson, a profsesory of surgery at the University of Gothenburg in Sweden. They added that their work opens up the possibility of trying to reproduce arteries for surgical use, such as for coronary bypass surgery.

This isn't the first procedure to use a patient's stem cells to create new tissue to save a person's life. HealthPopreported in 2011 of an Eritrean man with late-stage throat cancer who received the world's first synthetic windpipe. The organ was grown from the man's stem cells and then applied to a plastic scaffold, eliminating the need for a donor organ.