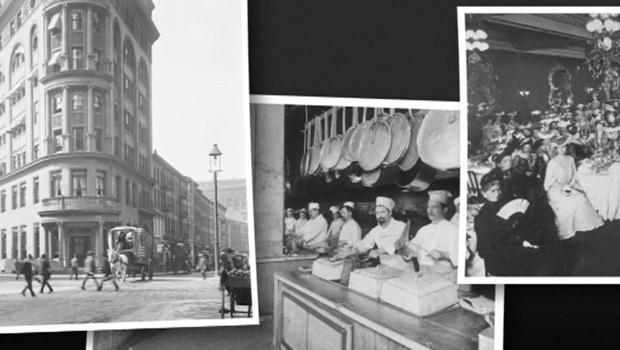 Delmonico’s restaurant in New York has been setting the table for nearly two centuries. The first in America, we’re told, to call itself a “restaurant,” Delmonico’s is on one historian’s list of spots that have shaped our popular taste. Here’s Jim Axelrod:

It’s noon in the kitchen of New York City’s Delmonico’s. But as the head chef at the nation’s oldest restaurant, Billy Oliva has more on his mind than just today’s lunch rush.

He’s taking history, and bringing it forward. “A lot of those classic dishes, a lot of those famous dishes that were invented here -- Lobster Newburg, Chicken a la King -- that’s my biggest challenge here,” he said.

Delmonico’s is the nation’s first formal restaurant, so in many ways this kitchen is the birthplace of what’s grown into a $780 billion industry.

Its influence on our nation’s menus is unmistakable: Eggs Benedict, Baked Alaska, and the Delmonico Steak all made their name here.

And with a history that dates back to 1837, Delmonico’s fingerprints are on more than just our menus. The restaurant has catered to presidents like Abraham Lincoln and Teddy Roosevelt; Diamond Jim Brady; great corporate magnates and movie stars.

Paul Freedman, a professor of history at Yale University, agreed that Delmonico’s -- almost like Kleenex or Xerox -- became shorthand for a grand restaurant.

In his new book, Freedman has come up with the “Ten Restaurants That Changed America” (W.W. Norton). Demonico’s may be on the cover, but all ten make up a delicious part of our cultural history.

“And how we think. How we look at the world, what sort of things we desire, and how we distinguished ourselves as Americans.”

Along with Delmonico’s, the list of 10 restaurants that changed America includes Mama Leone’s, in Manhattan’s theater district, which integrated ethnic food into the mainstream, and the Mandarin in San Francisco, which elevated it beyond chop suey;

Sylvia’s, in Harlem, and Antoine’s, in New Orleans, which pioneered the influence of regional cuisines;

restaurants where the high brow shaped how we eat out, at Le Pavillon and Four Seasons in New York City, and Chez Panisse in Berkeley;

and where the middle-brow shaped it as well, with Schrafft’s (the first restaurant to cater to women dining alone) and Howard Johnson’s.

“Howard Johnson’s is the basis for not only the fast-food industry, like McDonald’s or Burger King, but the fast casual industry, like Chili’s or Denny’s,” Freedman said.

Americans now spend more on eating out than on buying food to cook at home. But even if you never step foot in the place that started it all, don’t ever forget: Your favorite neighborhood joint has a lot more in common than you might think with iconic restaurants like Delmonico’s.

And at the place that started it all, Billy Oliva is meeting both his lunch rush and the challenge of history -- with a burger, Delmonico’s style -- egg and hollandaise sauce included.

Axelrod asked chef Oliva, “Have you ever been somewhere else and you open up the menu and you see Lobster Newberg or Delmonico Steak?”

“All the time,” Oliva replied. “The last time that happened to me, I was with my mom, and she told the waiter, ‘He works where they invented that!’ And the waiter looked at her like, What? What are you talking about?”