Nancy Ramsey is a contributor to CBSNews.com 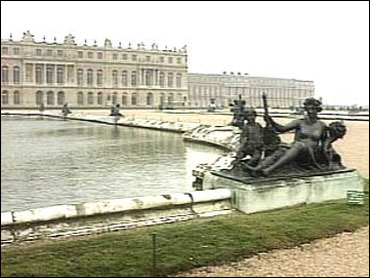 (CBS)
This week the Evening News ran a two-part investigation of suicide among American war veterans. The war on terror continues Pakistan is in a state of emergency.

And we just celebrated Veterans Day. We thought it might be time to reach back into history for some perspective on today's events, so we posed our 10 Questions to David Andelman, who's written a book called "A Shattered Peace: Versailles 1919 and the Price We Pay Today." It's set in Paris just after World War I (how ironic that it was once called "the war to end all wars"). Its major characters are the peacemakers who were present for the conference that would culminate in the Treaty of Versailles. But rather than building a lasting peace, Versailles helped set the stage for later conflicts and wars—World War II, Vietnam, Kosovo, the Middle East, Iraq.

1. You've reported all around the world—Europe, Asia, Russia, the former Eastern bloc. When and where did you get the idea that Versailles more or less laid out the roadmap for the 20th century?

I've reported from more than 50 countries, and everywhere I've gone I've asked thoughtful people, people who care about and think seriously about their countries, "Where do you think your country went off the rail?" I thought they'd say the Cold War, the Second World War. But to a man, and a woman, the answer was, "After the treaty of Versailles."

2. Rather than Versailles being a peace process, what you contend it did was to plant the seeds of all the conflicts and wars of the 20th century.

No question about it.

I didn't go deeply into the Second World War because it's such plowed territory, but there were economic demands on Germany that were catastrophic, which led to inflation, unemployment and misery in Germany in the 1920s—and the rise of Hitler.

But beyond that...take Vietnam. Nguyen Tat Thanh, who later changed his name to Ho Chi Minh, was working as a busboy at the Ritz. He had come to Paris to win independence for his homeland. He had set out from Saigon years before, traveling in the U.S., England and France to learn the languages and customs of the countries. And President Woodrow Wilson was in Paris talking about the self-determination of nations. Ho Chi Minh, who was a nationalist not a Communist at that point, presented demands to Colonel Edward House, Wilson's adviser, and they were basically ignored. And so Ho Chi Minh went to Moscow.

In Eastern Europe, the Treaty created Yugoslavia, and all these disparate peoples were in one country and were slaves to the Serbs—until it all blew up 70, 80 years later.

In Russia, That was the period when the Soviet Union was beginning to be formed. The Bolsheviks were the Al Qaeda of the day; there was a desperate fear that Bolshevism would be at the gates of London and Paris within the decade. Instead of trying to bring them into the international community, they were driven away, ignored.

3. You write in your prologue, "The seeds of today's terrorist wars were planted in the halls of the Paris peace talks—by those who were there and those who were not." Tell us about that.

The people dividing up the Middle East were there; the people being divided up were not. It was if there were a lot of individuals with their noses pressed against the window, who could only watch as their part of the world was being carved apart and reassembled.

Ibn Saud, the ruler of what was effectively Saudi Arabia, although it wasn't called that until later, wasn't invited.

The Vietnamese, the Koreans, many representatives from the Balkans were all absent. None of the Palestinian Arabs were there.

4. We'll get to Iraq and the world's other hot spots in a minute. But first, for those who did attend, what was the atmosphere like? They began arriving in November 1918, and the Treaty was signed the following June…

At the start of the conference, the war had just ended, and Paris was absolutely prostrate. But during those nine months, it came back to life. More than 100 countries were represented, and delegations had lavish houses and suites in the best hotels. There was constant to'ing and fro'ing. There was jazz, an active nightlife. Elsa Maxwell, the gossip columnist, came over and became the doyenne of the party circuit. Charles DeGaulle was there. So was Lawrence of Arabia. Felix Frankfurter and Chaim Weizmann representing Jewish interests. Marcel Proust would pump Harold Nicholson, the young British diplomat, for information. Plus, Communism was just cropping up, so you had demonstrations in the street.

5. Now, Iraq. Any roots in the Treaty of Versailles?

Iraq at the time was a collection of nomadic tribes, each with different religious sects and national backgrounds. The peacemakers wanted a single, unifed nation that Britain could use as a transit route to India, where they had a huge economic stake. And so they were forced to band together into a single, dysfunctional country.

Feisal ibn Hussein, a Bedouin prince of Arabia and descendent of the Prophet Muhammad, was at Versailles. What he wanted for his region was a collection of individual states. He told the diplomats, Look, America has 48 states and is one nation, why can't we have one community and six or eight states? His region wasn't made up of nations at that point, it was part of the Ottomon Empire, which was breaking up.

Once they created Iraq, they had no one to rule it, so they took Feisal. He was brought to Iraq and crowned the first king of Iraq, in what was like a comic opera in Baghdad, worthy of Gilbert & Sullivan, with a brass band playing "God Save the Queen." And for the first half of the 1920s, the British took an enormous beating there, people didn't' like the idea that there were British troops there. Sound familiar? So Churchill pulled everybody out.

You have to understand that the men advising President Wilson on the Middle East at the Paris talks had little current expertise in the region. The leader of this group was a specialist on the Crusades. That meant his knowledge ended in the 1300s. They had no understanding of who they were putting together in the country that became Iraq.

6. So there were indications then that Iraq could break into sectarian violence and the Sunni-Shi'ite-Kurdish divide?

One of the members of the Middle East group wrote about the "Koords" in his report, describing them as a lower form of life, resembling the American Indians with their "tawny skin, high cheek bones, broad mouth and straight black hair." Now that was about as sophisticated as Versaille's Middle East group got.

The Sunnis had been hated during the Ottomon Empire because they were the bureaucrats, the military leaders, the tax collectors sent from Constantinople (now Istanbul) to run these individual fiefdoms.

7. Continuing with the world's hot spots, how about Pakistan?

Pakistan and India were one territory at the time, and they were completely cut out of the peace process. They were British colonies, and the British, again, wanted no meddling in their affairs. The Brits were allowed to continue their despotic rule, and so there never developed a ruling class that could rule the countries very effectively.

The French and the British decided to divide up Palestine and Lebanon. The French wanted Lebanon because they had missionaries there; the British agreed to turn over its portion to the Jewish people with little real understanding that there were large numbers of Arabs in that territory. The Jews, of course, deserved a homeland, but the Palestinians did too.

9. Sometimes it seems as if the world's problems are insurmountable. But your book offers optimism if we can somehow undo what was done at Versailles.

This is a moment when, if we make the right kinds of decision, we can get back on the right track. Basically I think you have to let countries choose their own way and their own governments and not impose it on them. It hasn't worked in the past, it's not going to work in the future. Smaller microstates of a much more homogenous nature -- religiously, ethnically, nationally – work much better.

Globalization works only if each individual component can retain its identity within a broader whole. In Europe individual countries have given up some sovereignty in terms of currency and border restrictions, but their national characters have been retained. I think this could work in places like the Middle East and Iraq. It worked with Vietnam and former Yugoslavia, it took millions of lives and a lot of bloodshed, and I'm not at all suggesting it's easy, but ultimately these countries are now relatively peaceful and prosperous.

10. Besides what every writer wants from a book, namely fame, fortune and a place on bestseller list, what do you hope to accomplish with "A Shattered Peace"?

I hope that it becomes part of the national debate. Joe Biden has been talking about the tripartite division of Iraq; Ron Paul actually brought up Versailles last Saturday at a rally in Philadelphia when he said that the Versailles Treaty was one of our biggest problems today because it created "this artificial country called Iraq."

But beyond the election, I hope people will begin to understand where we came from and where we can go. If "A Shattered Peace" can help that process along, I will have fulfilled the mission of the book.