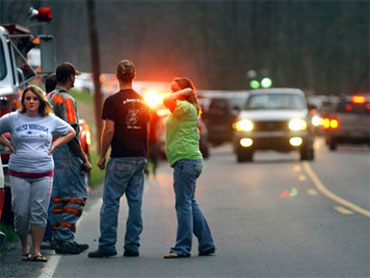 CHARLESTON, W.Va. - When 29 men perished in a single, powerful explosion at the Upper Big Branch mine a year ago, the tragedy stunned the nation — but the aftermath was stunning too, both for its seismic impact on major players in the coal industry and for the absence of any sweeping reforms.

To the people in coal country, what's happened to mine owner Massey Energy is downright mind-boggling: "King of coal" Don Blankenship has been dethroned — pushed out with a take-it-or-leave it retirement package — and the company he ruled with an iron will for more than a decade may soon vanish in a $7.1 billion buyout.

If there is any good to come from the Upper Big Branch tragedy, retired union coal miner Danny Vanoy figures it's the end of staunchly anti-union Massey and the disappearance of its former chief executive officer.

"They put the coal before safety," says Vanoy of Dorothy, a community a few miles from the mine that blew up in Montcoal last April 5. Vanoy spent 30 years underground working at union mines.

Blankenship's multimillion-dollar campaign donations and his political dabbling, along with his eight-figure paydays, helped make him the U.S. industry's best known coal executive and a household name in West Virginia.

The Richmond, Va.-based company never rivaled coal giants such as Peabody Energy in size, but it dominated the industry in notoriety.

Under Blankenship, Massey had become a $6 billion company by the time Upper Big Branch exploded, big enough to make the S&P 500 and outbid rivals to buy Virginia and Kentucky mine operator Cumberland Resources for $960 million.

The Wall Street Journal and Rolling Stone profiled Blankenship. The magazine called him "The Dark Lord of Coal Country."

His campaign contributions to one West Virginia Supreme Court justice and his friendship with another played a crucial role in a lawsuit against Massey that was ultimately heard by the U.S. Supreme Court.

The board's lead director, Bobby Inman, stood by Blankenship as the company faced criticism in the days after the disaster. But on Dec. 3 he gave the CEO a final offer: Retire by 10 p.m. and get $12 million, according to the letter filed with the U.S. Securities and Exchange Commission.

Blankenship was given a consulting contract, office and secretary but appears to have left West Virginia and hasn't responded to repeated requests for an interview since his forced departure.

"I would not have predicted that," said United Mine Workers President Cecil Roberts, who has known Blankenship for decades and been among his harshest critics.

"He was the coal baron of the modern era ...," Roberts said.

Just a few days after rescuers carried the last body from the mine, the federal Mine Safety and Health Administration set out to clean up the industry. Many of the targeted mines were operated by Massey.

At one, MSHA inspectors caught a crew operating without ventilation equipment to draw away explosive gases and dust. At another, they found so many problems they filed an unprecedented lawsuit to shut the mine down.

And the trend continues: Last month, MSHA cited Massey for more than 80 safety violations at several operations — nearly half of the nationwide total in the monthly "impact inspections" for February.

By early December, Massey's board decided the company needed a change of leadership and Blankenship was gone.

The company itself was next to go.

"If you scour the world, you'll see that the most productive mines are the safest mines," Alpha Chief Executive Kevin Crutchfield told The Associated Press.

Almost every major U.S. coal mining disaster over the past four decades has prompted new safety laws. As West Virginia Democratic Rep. Nick Rahall has said on several occasions, safety laws are written in the blood of coal miners.

A year after 78 died in a 1968 explosion in Fairmont, the nation responded with a landmark mine safety law that mandated regular government inspections and increased federal enforcement powers.

When 26 miners died eight years later in twin explosions at the Scotia mine in Kentucky, Congress responded with a second sweeping law that created the Mine Safety and Health Administration, among other things.

Congress created what's known as the MINER Act after a series of disasters in 2006, including the explosion of International Coal Group's Sago mine in West Virginia, where 12 men died. The law required better communications and safety equipment designed to keep trapped miners alive after a disaster.

Mining legislation stalled in Congress and was never seriously contemplated in West Virginia. Regulators stiffened some rules, particularly one requiring mines to do more to prevent coal dust explosions.

The industry's main lobbying group argues more laws won't solve the problems. Companies should do that through better training, coordination and the sharing of ideas, Quinn said.

"What MSHA has done is to be expected," Quinn said. "What we need to do is look ahead and say, how do we get on a continued path of excellence?"

MSHA, however, is proud of its tougher new approach.

It's found more than 4,600 violations during its impact inspections at more than 200 mines across the country.

"I believe that we are making progress here," said agency director Joe Main. "... The flaw in our system is when MSHA's not there, how do you enforce the law?"

He's asked Congress last week to give him more powerful tools to make it easier to idle problem mines, impose tougher criminal penalties and protect whistleblowers. In the meantime, Main does what works.

Instead of sending one or two inspectors to a mine during daytime hours, MSHA now sends groups of them in the evening. They often seize control of a mine's communication system, making it impossible to warn crews underground that inspectors are on the way.

On the night of Sept. 28, inspectors took over communications at Massey's Seng Creek Powellton mine in southern West Virginia.

Underground, they caught a crew illegally cutting too deeply into the coal seam. A foreman also admitted skipping mandatory tests for explosive gases, and inspectors caught Massey cutting coal with ventilation curtains rolled up and left out of the way.

"You never know," Main said, "what would happen if we hadn't went into that mine that night."