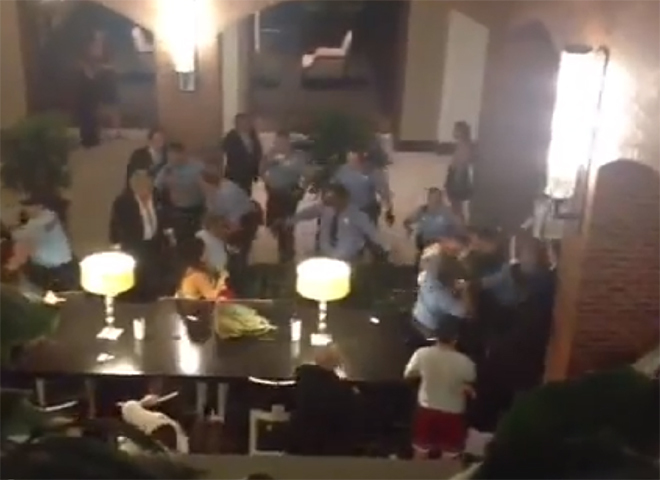 PHILADELPHIA One man suffered a fatal heart attack and three people were behind bars for their alleged involvement in a wedding reception brawl early Sunday morning.

Police said at least two separate wedding parties got into a fight that began inside the Sheraton Society Hill Hotel in Philadelphia.

Dozens of people were involved in the altercations, CBS Station KYW reports, as one group of guests fought with another group who had just returned to the hotel after an off-site reception.

Eyewitnesses said the fight began in the lobby, then escalated. It spilled out into the street and police were called in around 1:30 a.m.

The melee was caught on video by a witness and posted on YouTube. The video (which requires sign-in) had already received nearly a half-million views by early Monday.

Police say they don't know what sparked the brawl, but that alcohol was involved.

A police department spokesman, Lt. Ray Evers, told the Philadelphia Inquirer that the fight started among members of one wedding party in the hotel bar; the fight was then joined by members of another wedding party's guests who had just returned to the Sheraton.

Police confirmed the 57-year-old man who suffered a heart attack died at Jefferson Hospital around 2:50 a.m. Sunday. It is not clear if he was involved in the fighting.

It is known who initiated the brawl or why.

At least one man was subdued with a stun gun. One man was charged with assaulting an officer, authorities said. Two other men were cited for disorderly conduct, Evers said.

"If we had the opportunity to hit everyone with disorderly conduct, we probably would have," Evers told the Inquirer.

According to police, Commissioner Charles Ramsey has viewed the video and will consult with the district attorney about possible charges against other wedding party guests.

In a statement, a spokesperson for the Sheraton offered condolences to the family for their loss.