He's recovering from a life-threatening heart attack which he suffered Saturday after cross-country skiing for nearly eight miles.

Before Monday's procedure, the former mayor continued his light-hearted banter on Twitter, posting a picture of himself in a hospital gown, framed as a GQ magazine cover. 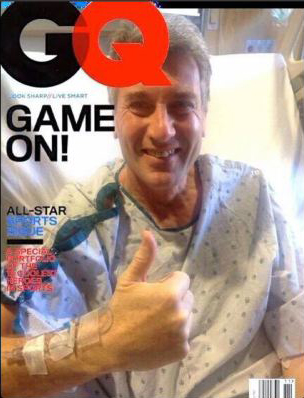 While Rybak does have a family history of heart disease, experts say his case should serve as a reminder of what can be done to prevent a heart attack.

Rybak is meticulous about his health, eating a dinner of kale and grilled turkey the night before his heart attack.

Dr. Dan Garry, chief of the cardiovascular division at University of Minnesota Medical School, says Rybak's case is not unusual.

He says the top risk factors for heart attacks are family history, being overweight, smoking and diabetes.

But even regular testing of those at risk won't predict an attack. Garry says one of the best indicators of a future event is a screening available at the U's Rasmussen Center.

"This actually is able to detect the earliest stages of cardiovascular disease and allows us to be even more aggressive with regards to treatment," Garry said.

He says anyone experiencing a heart attack needs to get help immediately.

"Within twenty minutes following a heart attack, there is already damage to the heart muscle," he said.

Symptoms of an actual heart attack include chest pains, shortness of breath, sweating and nausea. But Dr. Garry says not everyone experiences all of these symptoms.

"It can be profound perspiration with shortness of breath and nausea," Garry said.

One thing he recommends for all men over 45 and all women over 55 is to take a baby aspirin once a day.

That's even if you don't have a family history of heart disease.

Dr. Garry says this can help with potential blockages that may not be detected by tests.

Do not take baby aspirin daily if you have any history of bleeding or blood disorders.