MINNEAPOLIS (WCCO) -- Soggy conditions are expected to continue into Friday afternoon, and there are concerns about severe storms possibly causing flooding in the Twin Cities area on Saturday. Read the latest updates below.

UPDATE (9:30 p.m.): A number of counties were under a flash flood warning Friday evening following multiple days of rain in a summer otherwise marked by drought. A flash flood warning was issued for Howard, Mower, Mitchell, and Fillmore Counties until after midnight.

UPDATE (5:00 p.m.): There is a tornado watch issued for several southeastern Minnesota counties until 11 p.m. on Friday.

UPDATE (2:30 p.m.):  Thunderstorm development is occurring in southern Minnesota early Friday afternoon, and thunderstorm watches could be issued in the area.

UPDATE (12:30 p.m.): Saturday's severe weather risk has been upgraded to "enhanced" for a large part of the state, including the Twin Cities. Flooding is also possible in the evening.

According to WCCO Director of Meteorology Mike Augustyniak, the severe threat is from mid-afternoon Saturday into the evening. Enhanced areas of severe weather could include 80+ mph straight-line winds, large hail and tornadoes. 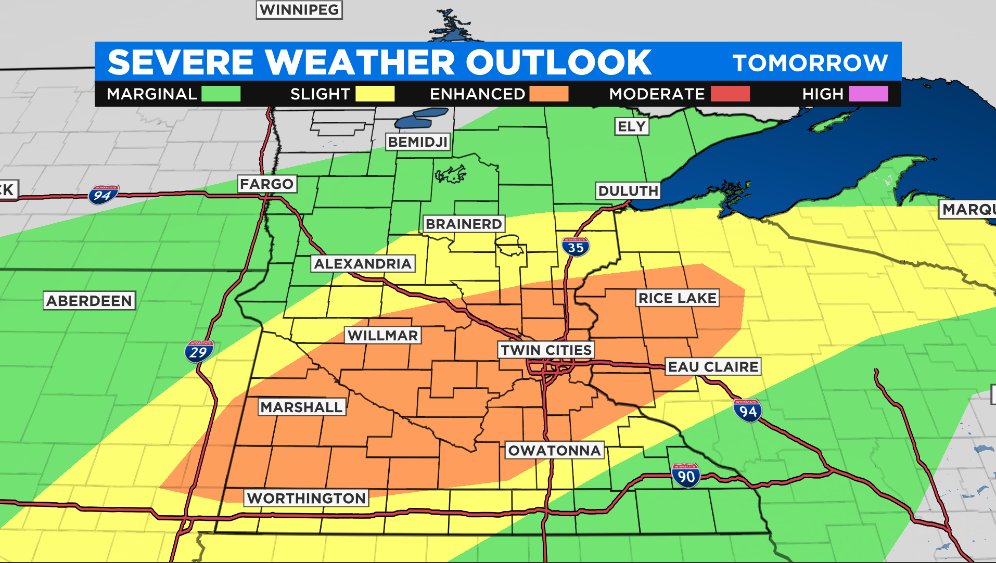 MINNEAPOLIS (WCCO) -- According to WCCO meteorologist Riley O'Connor, the wettest part of Friday will be in the morning. Flash flood warnings for parts of the southeastern region of the state expired at 7 a.m.

Showers will become more scattered in the late morning and early afternoon. Temperatures will reach the mid-70s.

"We may even get a little sunshine," O'Connor said.

Things change into Saturday, with temperatures jumping up into the upper-80s and thunderstorms possible in the evening.

WCCO Director of Meteorology Mike Augustyniak says he's a bit concerned about urban and basement flooding in Hennepin and Ramsey counties, especially in the evening hours of Saturday.

Sunday is expected to be sunny with less humidity.

Rainfall Is 'Great News' For Drought

Parts of the state had 2-4 inches of rainfall, and that's great news considering the drought conditions in the state.

The latest figures show that 88% of the state is still listed under severe drought conditions, and all but 3% of the state is under at least a moderate drought. Those figures haven't taken into account rain from this week, however.

Also, an air quality alert that was issued Thursday for parts of northern Minnesota and upper half of Wisconsin has expired early at 9 a.m. Some areas remain under an alert until 8 p.m.