For those not into hip-hop and rap, South Florida hosts a selection of bars playing a wide variety of other types of music. Most of us think disco when we hear the phrase "oldies music." But how about 50's jazz when a group of characters known as the Rat Pack crooned their way through Vegas shows. Then there's prohibition era cabaret performed in speakeasies. The offerings are unique when you stroll into these establishments and stroll back in time.

Baby boomers were in their prime when disco was king, and The Anderson captures the essence of that era flawlessly. You'll be transported back in time when you enter the '80s-inspired establishment located in the former home of Miami's oldest bar - the Magnum Lounge. Feast on unique menu creations while listening to the oldies. Even the drinks hearken back to that unforgettable period. Indulge yourself with concoctions like Nobody Puts Baby In a Corner (named for a line from the 1987 movie "Dirty Dancing," that actor Patrick Swayze once claimed women often asked him to repeat.)

Step into the Regent Cocktail Club and step back in time. The retro-styled nostalgic bar, located in the Gale Hotel, has an old school feel that reminds one when the Rat Pack (portrayed by Frank Sinatra, Dean Martin, Sammy Davis, Jr., Peter Lawford and Joey Bishop in the 1960 original film version of "Ocean's 11") reigned supreme. Bartenders in waistcoats pour "authentic" drinks from the period. A side patio is available for smoking cigars and playing dominoes. All while listening to hits from every era, including show stoppers like they played in 1941 when the original club first opened.

Long ago in a classy age when jazz first became popular, superstars like Billie Holiday (portrayed by Diana Ross in the 1972 film "Lady Sings the Blues") performed at a club called the Ball & Chain. Back then it was a saloon that opened in 1935. In the first decade of the 21st century, after changing ownership many times, the renovated building reopened with its original name. Now it features live jazz each weekend on the Pineapple Stage. The club offers Cuban-inspired cocktails like a classic Mojito Criollo (made with more sugar and fresh mint leaves to enhance its aroma). 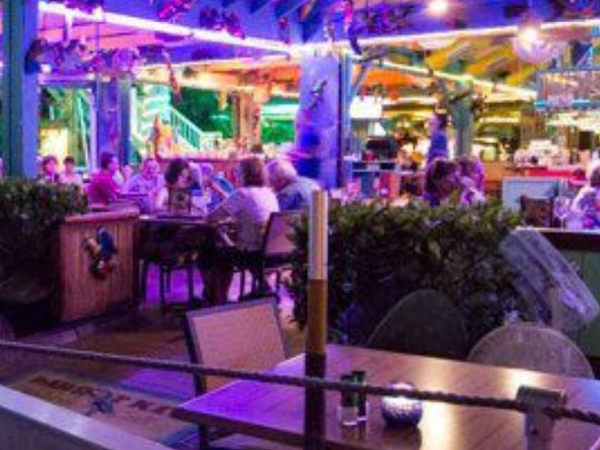 Multi-talented Frank Pileggi, a crooner from Jersey who goes by the stage name "Frank Torino", really can belt out a tune. He wows Parrot Key patrons with the title song from Elvis Presley's 1964 musical "Viva Las Vegas," then leads them in line dancing. On weekends you can do the Electric Slide as well as jitterbug the night away. The restaurant has been voted Best Waterfront Dining since 2004, and can be reached by land and sea. The food and drink menus boast colorful frozen concoctions and Caribbean-inspired cuisine.

Think Liza Minnelli and Joel Gray in the 1972 award winning film "Cabaret," as you warp back to a period in American history when drinking was forbidden. The feel of a prohibition era speakeasy is alive and well at Stache 1920's Drinking Den. Charles William Stache opened his first speakeasy in New York. It was so popular that a year later he opened in at least twenty more cities, including Miami. Now patrons can heft a Voodoo Child #1 and the Whiskey Reviver #1 while watching a cabaret show.

Related: Top Bars For Ladies Night Out In South Florida

Dylyce P. Clarke is author of The Royalty Principle: a Guide to Reigning in the Kingdom of Heaven. Her personal testimony includes events which she refers to as "close encounters of the God kind." She is President of Space Coast Word Weavers, a writer's critique group, and has published short fiction stories in magazines.