HOLLYWOOD (CBSMiami) – The search continues Tuesday for 21-year-old Noemi Bolivar who vanished without a trace from Anne Kolb Nature Center in Hollywood on Thursday Feb. 11.

Marycel and Jose Bolivar told CBS4's Peter D'Oench that their daughter Noemi Bolivar  was last heard from in a Snapchat.

They are worried about her safety since they say no one has heard from her, adding she has never disappeared like this before.

The parents shared cellphone video of their daughter with CBS4, along with a montage of photographs and a new flyer they have been passing out during several organized searches of the area, starting at Anne Kolb Nature Center. 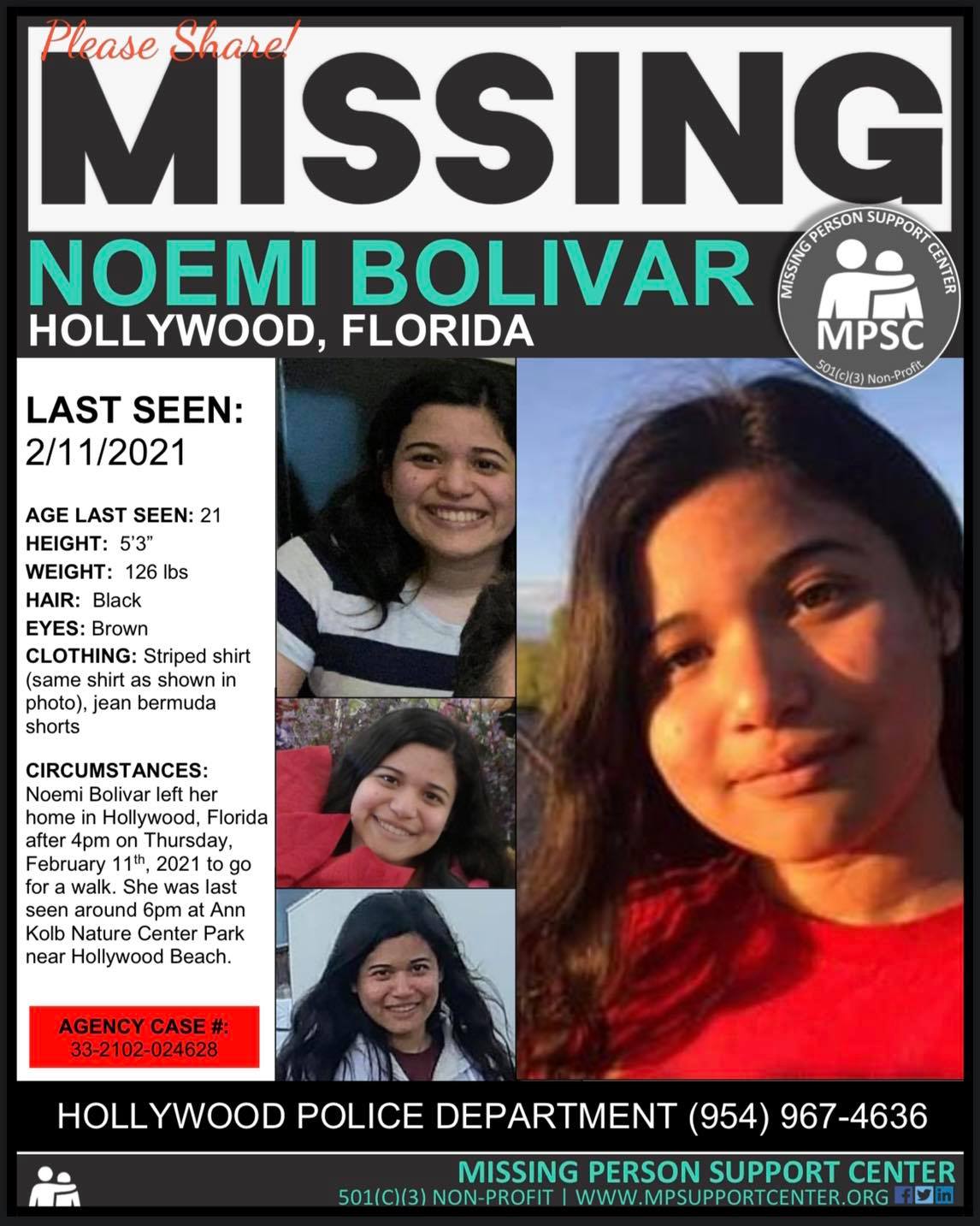 They are also working with the Hollywood Police Department in this case and hope to raise a reward and say they will be working with Broward Crime Stoppers as well.

Marycel Bolivar said on Monday, "I am beyond worried. I am terrified. We have not heard from her in four days. She is not the type of girl to disappear. She's a church going girl and she has never done anything like this before. This is so out of character. She didn't take any money and left all her belongings here. What worries me is that someone may have taken her."

Marycel Bolivar broke down as she continued, "All I want is my daughter back. I feel like part of my heart has been taken out. I haven't been able to sleep. I can barely breathe. Please help us. I mean I know she is alive. Bu we feel she is in danger and we need to bring her home."

Jose Bolivar said, "For the past 36 hours I have been really scraping to get answers as to what happened to her."

As he fought back tears, he added, "For me it's really hard you know. It is so hard. Just remember, this can be your daughter. This can be your neighbor's daughter. Please help us find out what happened."

Jose Bolivar said he has been receiving a lot of support from members of his Hollywood church, the Church of Jesus Christ Latter Day Saints.

Family friend Karem Ryker has been part of the search parties and has been speaking with law enforcement contacts.

"I definitely think she could be a victim of human trafficking and one thing they do is look for people who are sad and she was sad that day. She did not get an internship she wanted," said Ryker.

"She has high-functioning autism," said Ryker, "and she has ADHD. She used to be on medication. She's a peace maker, not a fighter. She is a devout Christian."

She said even though Bolivar has a degree in wildlife ecology, she has the social maturity of someone who is 15 years.

Hollywood PD pinged Noemi Bolivar's cellphone, reporting it was near the beach in Hollywood.

According to her friends, police pinged it again and the signal indicated it to be near 2300 N Ocean Drive.

Her friends said it was uncharacteristic of her to leave like this and they are concerned for wellbeing.

"She is a very sweet, thoughtful, and very spiritual and religious girl making good choices in her life. She has a lot of support from her friends and church congregation," Joy Berta wrote in an email to CBS4.

Bolivar is 5' 3" and weighs about 126 pounds. She was last seen wearing a black and white striped shirt, jean Bermuda shorts and sneakers.

Anyone with information on her whereabouts is urged to call the Hollywood Police Department at (954) 967-4636.