They are among the 17 people killed by a gunman at Marjory Stoneman Douglas High School in Parkland on Wednesday.

Broward County Sheriff Scott Israel said Thursday that all families who lost loved ones in the shooting have been notified. 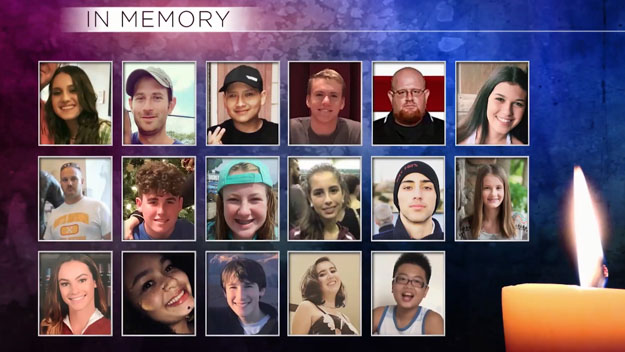 Broward County Public School's Superintendent Robert Runcie was overcome with emotion today, telling everyone we must overcome the loss together.

"Please keep our babies, our families and this entire community in your prayers as we go through the healing process. It's going to take a while for us to be able to deal with this," said Runcie.

Several students who survived the hail of bullets are still hospitalized. Others did not make it.

Here are the victims killed in the shooting who have been publicly identified:

Hixon, the athletic director for Marjory Stoneman Douglas High School, has been reported dead, according to Denise Lehtio, the communications director with the school's varsity and junior varsity football program. Lehtio told CNN that the football coach at Douglas told her Hixon was shot and killed.

Feis, the assistant football coach, was killed when he threw himself in front of students to protect them from oncoming bullets, according to Lehtio. He suffered a gunshot wound and later died after he was rushed into surgery, Lehtio said.

"He died the same way he lived -- he put himself second," she said. "He was a very kind soul, a very nice man. He died a hero."

It is with Great sadness that our Football Family has learned about the death of Aaron Feis. He was our Assistant Football Coach and security guard. He selflessly shielded students from the shooter when he was shot. He died a hero and he will forever be in our hearts and memories pic.twitter.com/O181FvuHl3

She was a student at the school. A student who knew here described her as having a kind soul, saying, "She was a really good friend."

He was a 14-year-old freshman. His older brother Miguel, who graduated from Douglas High last year, shared the news via an Instagram post early Thursday morning.

A 15-year-old freshman. Her cousin Ariella Del Quaglio confirmed the student's death via Facebook on Thursday.

She was 14-year-old freshman and served on the school's winter guard team. Color guard choreographer Andy Mroczek posted on his Facebook page.

He was a senior who had just received a swimming scholarship to the University of Indianapolis.

"He was such a good athlete. He had a whole life, future ahead of him," said friend Emily Koneke. "Sad to see all that gone away by some person."

Glenn Greenwald, a journalist with The Intercept, shared the news on Twitter.

One of yesterday's victims, Nicholas Dworet, was a senior who just received a swimming scholarship to the University of Indianapolis. My niece was friends with him since kindergarten and posted her memories this morning. Such a heartbreaking loss and sickeningly avoidable traged pic.twitter.com/m3EEHjKjOe

Yesterday, the world failed us all. Rest In Peace to such an amazing soul. It was an honor to swim by your side and you will forever be my co captain. You deserved the world and so much more. Nick Dworet, you will never be forgotten❤️ pic.twitter.com/5u8rYcfRgB

Family members say Luke died on the third floor of the school.

"This has devastated our family and we're all in shock and disbelief. Our hearts are broken. Luke was a beautiful human being and greatly loved," posted his uncle, Toni Brownlee on Facebook. "Also, pray for the other families whose loved were also murdered so cruelly."

Friends of the teen confirmed her death on social media. Carmen was a semifinalist for the 2018 National Merit Scholarship Program.

She was a senior who planned to attend Lynn University​.
Her friend posted on Facebook.

According to the Miami Herald, Joaquin was born in Venezuela and moved to the United States when he was just three years old. He became an American citizen in January of 2017.

Alaina's great-aunt, Claudette McMahon Joshi wrote on Facebook that the 14 year old was one of the victims.

She was confirmed dead by a peer counselor at her church.

"RIP Cara, and fly with the angels. You will be greatly missed, and we will always love you and celebrate your beautiful life," her neighbor wrote on Facebook.

He was a marching band student.

He was a geography teacher who unlocked his classroom to allow panicked students to take shelter inside during the shooting. He was struck and killed by a bullet while closing the door behind them, according to The Miami Herald.

Wang, 15 years old,  was last seen on Wednesday wearing his gray ROTC uniform and holding a door open so other people could escape, said his cousin, Aaron Chen.

Another friend also tweeted about his death.

This is 15 year old Peter Wang. He was in the school's ROTC program. He held the door open for other students so they could escape. His cousin said "He wasn't supposded to die. He was supposed to grow old with me." Wang died yesterday while saving others.#GunReformNow pic.twitter.com/2c47yzL0ad

Helena would have started college next year. Her family member, in a lengthy Facebook post, called her a "smart, kind hearted and thoughtful person."