MIAMI (CBSMiami) – South Florida divers and lobster lovers will be hitting the water starting as early as midnight for the state's annual two-day lobster mini-season.

While Florida has three varieties of lobster, state wildlife officials say that most fishermen prefer the Florida spiny lobster, also known as the Caribbean spiny lobster. The spiny lobster inhabits tropical and subtropical waters of the Atlantic Ocean, Caribbean Sea and Gulf of Mexico.

The best time to catch a Florida spiny lobster is at night since lobsters stay in their dens during daylight hours to avoid predators and only come out after dark to look for food.

There are plenty of rules divers must follow and the FWC will be out in full force making sure everyone is following the law and staying safe.

"Please be aware FWC is not only checking for lobster, but will be enforcing boating safety laws including boating under the influence," said FWC spokesman Ronald Washington.

According to state law, during the two-day sport lobster season, divers and snorkelers can take up to six lobsters per person day in Monroe County and Biscayne National Park, 12 per person per day for the rest of Florida. 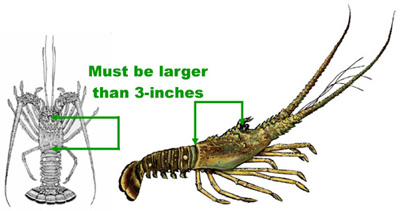 The lobsters must have a carapace length greater than 3 inches to be legally taken during the open season. Divers must possess a measuring device, and lobsters must be in the water while they are measured.

The spiny lobsters must remain in whole condition until they are brought to shore.  Any device that might puncture, penetrate or crush the shell of the lobster may not be used.

Click Here for the rules of this year's mini-season.

You must have a recreational saltwater fishing license and a spiny lobster permit unless you are exempt from recreational license requirements.