MIAMI (CBSMiami) – Florida's rate of new COVID-19 infections continues to climb sharply. For the second week in a row, Florida alone accounts for 20% of all new cases nationally.

With the release of its weekly numbers, the Florida Department of Health reports 73,199 new cases throughout the state, up more than 25,000 cases from the previous week. 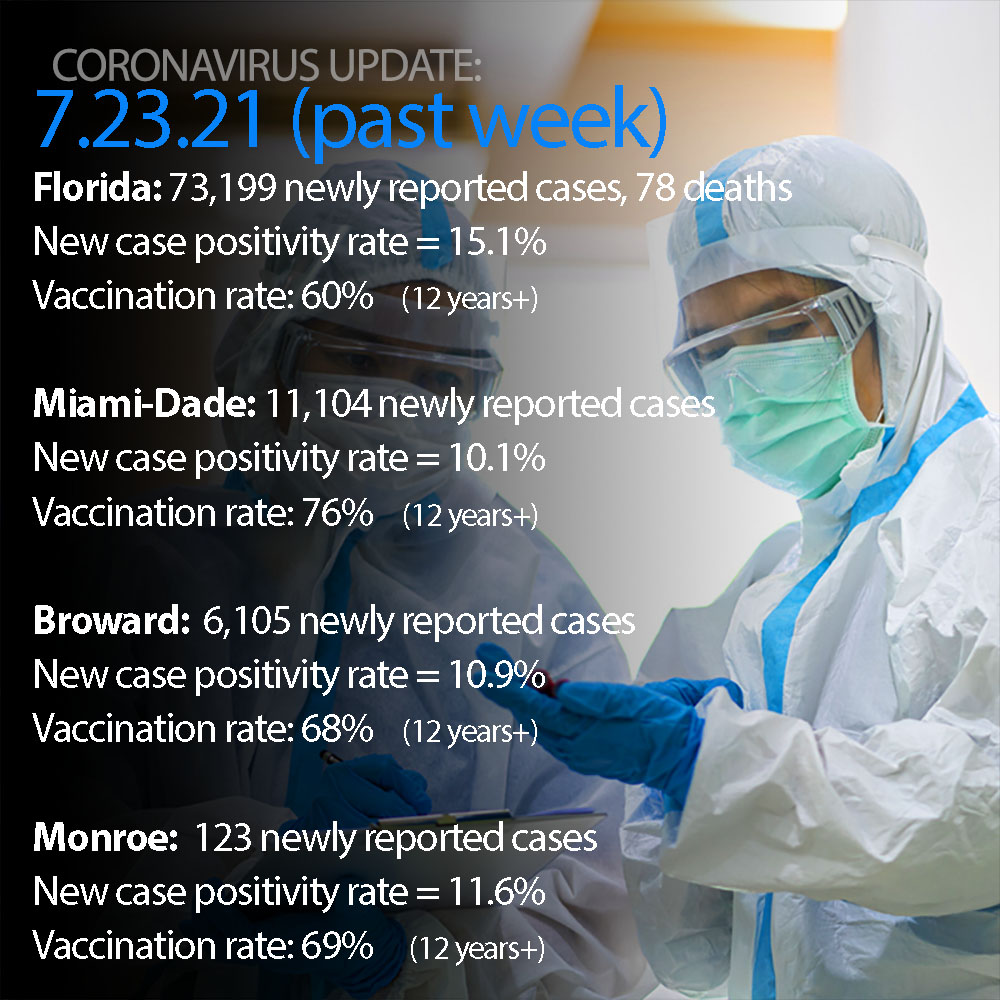 There were also another 78 reported deaths, and the state's new case positivity rate stands at 15.1%, which is up from 11.5% from the previous week.

Despite Miami-Dade County's 76% vaccination rate, there were 11,104 newly reported cases last week and the county has a 10.1% new case positivity rate, up from 7.4%.

About 5,300 Floridians are now hospitalized with COVID, a 65% jump since last week and nearly a tripling since June 14 when 1,845 were hospitalized, the Florida Hospital Association said. Officials have said more than 95% of those hospitalized were not vaccinated.

Gov. Ron DeSantis, who has been vaccinated, this week encouraged the remaining unvaccinated Floridians to get their shots.

Despite the recent surge, DeSantis said the state will not return to government mandates and it is up to individuals on how they deal with the pandemic.

"We have a situation where we have three vaccines that have been widely available for months and months now and people need to make decisions that are best for them," he said. "To have the government come in and to lock anyone down or restrict anyone is totally unacceptable."

Because of the new outbreak, several hospitals across South Florida and in other parts of the state are reinstituting visitation restrictions. Jackson Health, the state's largest provider, has barred visitors for most of its patients at its hospitals. Others are limiting visitors to one per patient.

Dr. Lilian Abbo, head of Jackson's infectious disease prevention program, believes most of those becoming ill are infected with the delta variant as they are becoming sicker faster than with earlier strains of the coronavirus. They are also not seniors and other groups that were previously prevalent.

"We are seeing younger people in their 20s and 30s with not much risk factors -- not obese, not diabetic, coming in very sick," Abbo said. "Some of them requiring potential lung transplants."