The inaugural CBS4 Nat Moore Trophy recognizes the top high school player (any position, any division, and any school in Miami-Dade, Broward and Monroe Counties) who demonstrates positive character, leadership attributes, and meets all team standards for academics, sportsmanship and conduct both on and off the field.

Then the public had a turn at choosing one of the four finalists, but the voting is over now and the winner will be announced during our CBS4 Nat Moore Trophy presentation live from Hard Rock Stadium on Tuesday, December 10 at 7:00 p.m. on CBS4. 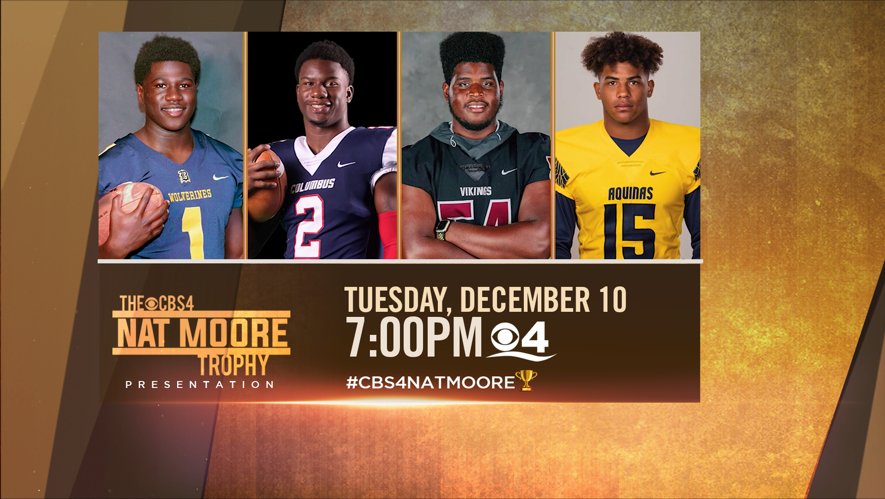 If you want learn more about each finalist, watch our player profiles below.

Who is Nat Moore?

He is a Florida native, born in Tallahassee but grew up in Miami, where he attended Miami Edison Senior High and Miami-Dade Community College.

At the University of Florida, Moore was a star running back and later inducted into the UF Athletic Hall of Fame as a "Gator Great" in 1978.

Over his 13 year playing career, Moore recorded 510 receptions for 7546 receiving yards and 74 touchdowns and ranks in the top three in Dolphins history in each of those three categories.

Moore is best known for his famous "Helicopter Catch" which sent his body spinning into the air when he was hit simultaneously from opposite directions by two New York Jets defenders in 1984.

Moore retired in 1986 as an all-time Dolphin great!

He is currently the team's Senior Vice President of Special Projects and Alumni Relations.

His post retirement career is filled with humanitarian work and philanthropy.

In 1984, the NFL voted Moore as "Man of the Year" for outstanding service to his community and he received the Byron White Humanitarian Award in 1986.

In 1998, he created the Nat Moore Foundation, which works with disadvantaged kids in Miami-Dade County in efforts to make sure they receive the best education possible.