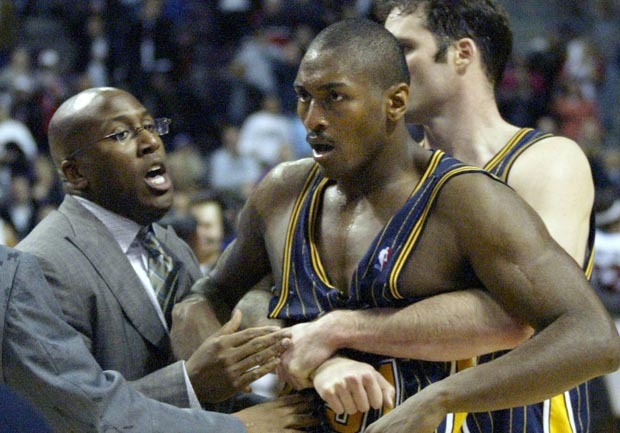 (CBS/AP) In the 2006 playoffs between the Lakers and Phoenix Suns, Bryant had the ball at the top of the key and was being guarded by Bell. When Bryant made a move to his right, Bell took his left arm and wrapped it around the neck area of the Lakers guard, throwing him to the floor. After the game, Bell said he was retaliating for taking an elbow in the jaw from Bryant. It was one in a series of memorable dustups between Bryant and Bell, who later acknowledged a lack of judgment. Bryant apparently got over it — four years later, he was trying to lure Bell to sign with the Lakers.

The 1997 Miami-New York playoff series was filled with angst, which all boiled over in Game 5 after Brown and Ward were jostling for rebounding position during a Heat free throw attempt. Brown flipped the Knicks' guard over into a row of courtside photographers, sparking a melee that led to the suspensions of four New York players — Allan Houston, Patrick Ewing, Larry Johnson and John Starks — for leaving their bench to join the fight. Those suspensions were ultimately upheld by a U.S. District Court judge.

With 18.2 seconds left in a San Antonio-Phoenix playoff game in 2007, the Spurs were down three and had to foul. Horry went too far, however, using his forearm to send Nash flying into the lower part of the scorer's table. Horry walked away like nothing happened, and Nash — who was running at close to full speed when he was sent airborne — eventually got up as players from both teams pushed and shoved a bit more after the play.

Earlier this season, in a game between the New Orleans Hornets and Los Angeles Clippers, Griffin, one of the game's most spectacular dunkers, caught a pass near the top of the 3-point line and was sprinting toward the rim with 4:06 left in the fourth quarter. He never got airborne. Smith lowered his shoulder into Griffin, sending the Clippers' star sprawling. Griffin remained down for about 30 seconds, then was clearly groggy when he got to his feet. Smith walked through a courtside seating area to avoid three Clippers who confronted him moments after the hit, then raised his arm to acknowledge cheers from the crowd.

During Game 4 of the 1984 NBA finals, the Los Angeles Lakers' Kurt Rambis had a chance for a fast-break layup, with Boston's Gerald Henderson a step or two in front of him as he neared the basket. Rambis was clotheslined by the Celtics' Kevin McHale on the play, setting the tone for what became an extremely physical remainder of the finals. "Oh, look out," is how longtime Lakers announcer Chick Hearn described the play. The Celtics trailed in the series 2-1 at the time of the Rambis-McHale hit. They went on to win the title in seven games, starting with a victory in that pivotal Game 4.

Carmelo Anthony was the NBA's leading scorer on Dec. 16, 2006 when he and the Denver Nuggets visited Madison Square Garden to play the New York Knicks. With time running down and the Nuggets comfortably ahead, the Knicks' Mardy Collins committed a hard foul against Denver's J.R. Smith.

Several players started pushing and shoving, and Anthony — who was being held back — broke free and threw a sucker punch toward Collins, earning a 15-game suspension. In all, 10 players were ejected.

Metta World Peace — the former Ron Artest — found himself in yet another controversy on Sunday, a moment that started amid celebration. He had just dunked for the Lakers over Oklahoma City's Kevin Durant and Serge Ibaka and was pounding his chest with his right arm. With James Harden directly next to him, World Peace raised his left elbow over Harden's shoulder and cleanly hit the Thunder guard in the back of the skull. Harden remained down for about a minute before going to the locker room and did not return to the game. Said World Peace: "I got real emotional and excited." He called his actions "unfortunate" and "unintentional."

With the Dallas Mavericks up 98-68 in Game 4 of a 2011 Western Conference playoff series and less than 9 minutes from a sweep of the Los Angeles Lakers, Barea drove down the lane for a layup. While airborne, the 6-foot, 175-pound Barea took a hard, deliberate right-arm shot from the 7-foot, 285-pound Bynum, sending the guard to the floor. Bynum was immediately ejected, and took his jersey off before leaving the court — getting walked off by Ron Artest.

The most infamous brawl in NBA history started when Indiana's Ron Artest — years before changing his name to Metta World Peace — fouled Detroit's Ben Wallace late in a Nov. 19, 2004 game. Wallace shoved back, other players got involved and Artest wound up lying on the scorer's table. He even put on a pair of headphones at one point, while others on the court continued a battle of mostly words for over a minute. Then a fan threw a beverage on Artest, prompting him and teammate Stephen Jackson to head into the stands. "Someone started trouble," Artest said years later, "but I ended it."

With a fight already going on at midcourt of a 1977 game between the Los Angeles Lakers and Houston, the Rockets' Rudy Tomjanovich ran in to try to play peacemaker. Instead, he got one of the worst shots in sports history — a right hand from the Lakers' Kermit Washington, forever known around the NBA as "The Punch." Tomjanovich was unconscious and bleeding, eventually needing multiple operations to repair facial fractures. He also suffered a concussion and other serious injuries. Tomjanovich returned the next season, though was never the same player again.