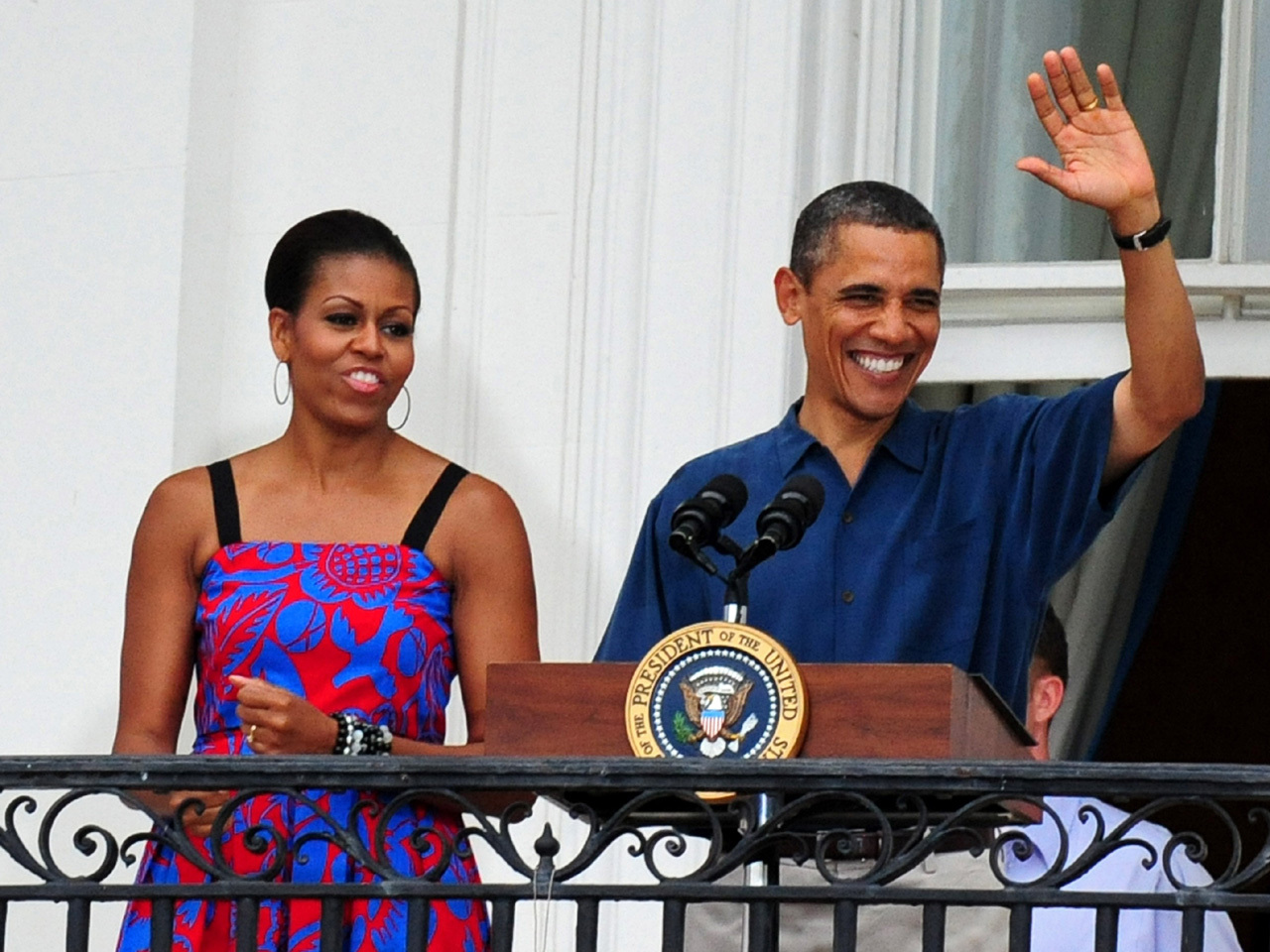 (CBS News) This Fourth of July, both President Obama and his Republican rival Mitt Romney will break from their typical campaign routines in favor of celebratory displays of patriotism.

Mr. Obama, like last year, will celebrate Independence Day with military families he's invited to the White House for a barbeque, concert and a chance to view fireworks from 1600 Pennsylvania Ave.

Romney, meanwhile, will participate in a parade with his family in Wolfeboro, N.H. The former Massachusetts governor has an estate in Wolfeboro where the Romney family is vacationing this week.

Not all presidential candidates spend the Fourth celebrating; for some candidates in years past, Independence Day was a day like any other to win votes. Some candidates, meanwhile, mixed patriotism with politics. Here's a look at some past Fourth of July campaigns.

2008: McCain back from Mexico, Obama on defense on Iraq

In 2008, the days ahead of the Fourth of July had an unusually international focus.

Barack Obama spent the actual holiday in Montana -- a state he ultimately lost to John McCain. He explained his presence this way: "I'm a firm believer that 90 percent of success is showing up, and Democrats haven't been showing up in these places."

A day earlier, Obama was in North Dakota discussing an upcoming trip to Iraq, where he said he could re-evaluate his thoughts on the war after talking to military leaders. Later in the day, Obama called a second press conference to clarify his remarks and assure voters he wanted to bring home the troops in Iraq.

McCain, meanwhile, was home in Arizona -- fresh off a trip to Mexico and Colombia, where he spoke about trade. On PBS' "The NewsHour with Jim Lehrer", conservative commentator Ramesh Ponnuru said it was a shame for McCain to spend the patriotic week abroad: "If ever there were a Fourth of July candidate, it's John McCain. And he cedes the field this whole week."

2004: Bus tours through the Midwest

On July 4, 2004, Vice President Dick Cheney and Sen. John Kerry, D-Mass., were both on bus tours, making their way through the Midwest. President George W. Bush marked the holiday with a speech in West Virginia.

Kerry, meanwhile, spent the last day of his bus tour in Iowa, participating in a parade in the small town of Cascade and playing baseball in the cornfield featured in the movie ''Field of Dreams.''

According to the New York Times, he talked that day about values. ''I'm a person of faith, and I know I'm surrounded by people of faith," he said. "But there's nothing conservative about allowing your administration to cross that beautiful line drawn by the founding fathers that separates affairs of church and state in the United States of America.''

Bob Dole celebrated the nation's 220th birthday on the campaign trail in Wheaton, Ill. He walked in the town parade holding a small American flag, in what the New York Times described as "one of the best receptions Mr. Dole has seen in his race for President."

He had at least one detractor, however: The Times also reported that Dole was being trailed by "Butt Man" -- a character Democrats brought to life in seven-foot, foam-rubber cigarette costumes. "Butt Man" would follow Dole around, "passing out fake dollar bills that show 'Smokin' Bob Dole' puffing on a scribbled-in cigarette," the Times reported -- and he made an appearance on the Democrats' float in the Wheaton parade.

President Bill Clinton, for his part, celebrated by watching an eagle being released near Maryland's Patuxent River. He then went to the election battleground state of Ohio to celebrate the bicentennial of Youngstown.

President George H.W. Bush joined in a July 4 softball game in Faith, N.C., in 1992, hitting a single in his one time at bat.

The day in Faith was intended to portray Bush as a leader as much at home in the nation's small communities as much as he was on the world stage -- later that evening, the president headed for the World Economic Summit in Munich.

But according to the Washington Post, the president was criticized by civil rights leaders for spending the holiday in an all-white town where the Ku Klux Klan marched down Main Street just the previous year. "Don't let anyone knock your town," Bush said, according to the Post. "You stand with me against bigotry and racism."

Bill Clinton, meanwhile, spent the day taking in a baseball game in Illinois.

On July 4, 1988, then-Vice President George Bush led a parade in Michigan and then attended an Independence Day festival in St. Louis.

But in addition to partaking in the celebrations, the vice president also addressed a serious incident: The U.S. Navy a day earlier shot down an Iranian airliner, leaving 290 dead. U.S. officials said American personnel mistook the civilian plane for an attacking fighter plane.

"Our hearts go out to the loved ones and families on the plane", Bush said that day, adding he supported the captain of the U.S. warship.

His Democratic competitor Michael Dukakis called on the U.S. to help end the Iraq-Iran war. "As long as we and the entire international community fail to use our combined efforts to stop it, there will be more tragedies, more heartache, and the ever present risk of more accidents in the Gulf," he said.

In the evening, Dukakis made headlines by eating dinner and watching fireworks with his one remaining Democratic opponent, Jesse Jackson.

1984: Reagan starts an auto race via phone while onboard AF1

President Ronald Reagan in 1984 launched a three-day campaign swing on July 4, starting in Florida and Alabama.

The president kicked off the Firecracker 400 stock car race in Daytona Beach -- while still in the air on Air Force One. Via telephone, he delivered the order, "Gentlemen, start your engines." Reagan was there after the race to congratulate driver Richard Petty for his 200th NASCAR win.

By July 4, 1980, 53 American citizens remained in captivity in Iran. President Jimmy Carter discussed the hostage situation at a stop in Merced, California on Independence Day. According to the New York Times, he said that ''fanatics'' and ''terrorists'' in the Iranian government hampered the release of the hostages.

The president made no mention of his rival Ronald Reagan -- yet a day earlier, he blasted the Republican's tax plan at a speech before the National Education Association.

"It is sheer deception to promise the American people that we can have this enormously expensive and unfair tax cut, that we can dramatically increase defense expenditures even above and beyond the substantial levels I've recommended," he said.