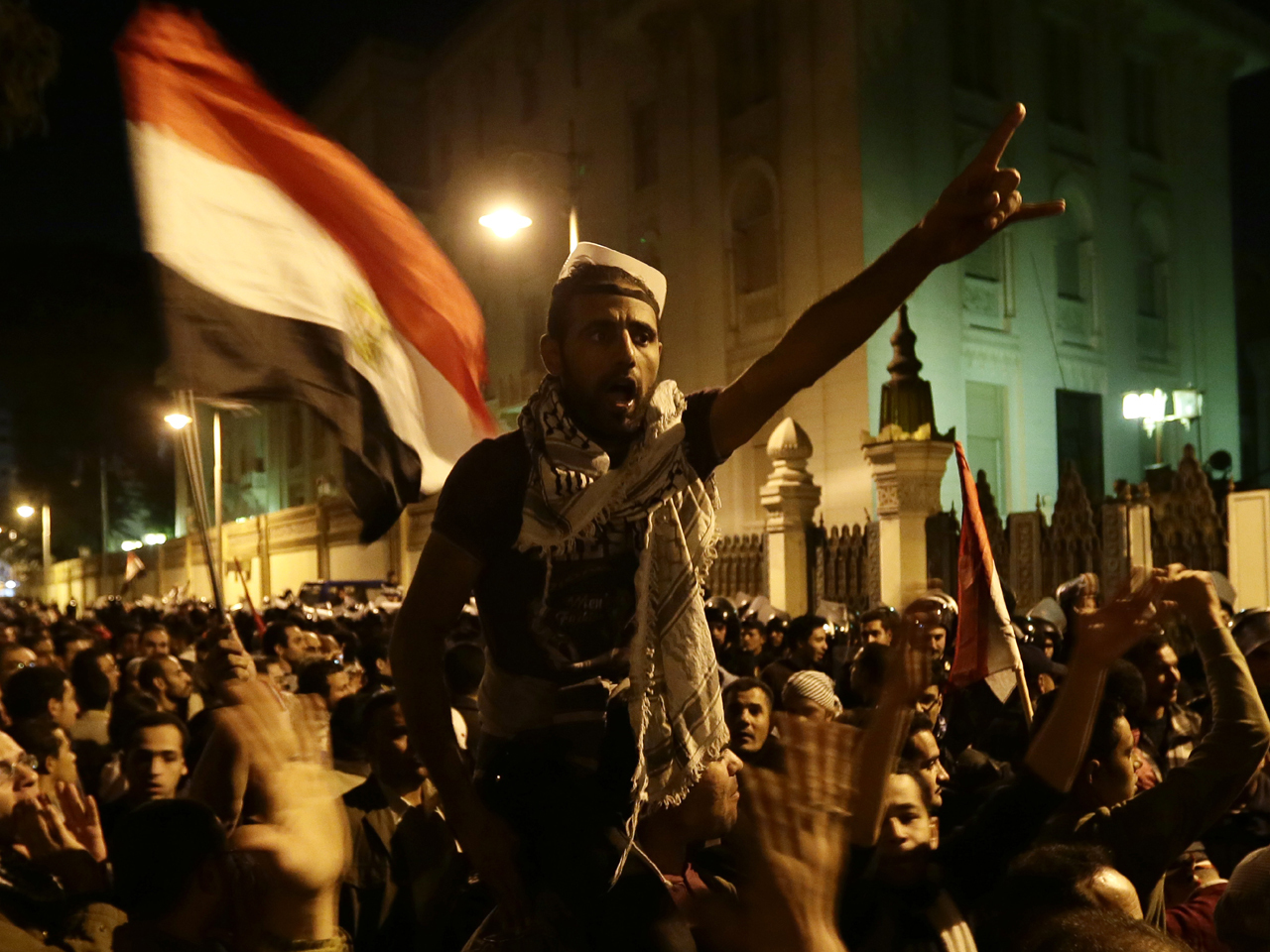 This year has seen the dramatic changes in Arab countries sparked by the Arab Spring continue, and take some challenging turns. Disaster has struck from Italy to the Philippines, sports took center stage in one of the world's oldest cities, and America marked a harrowing landmark in a war that will enter its 12th year in 2013.

What follows is a look back at 10 of the most significant and memorable moments in news, from around the world, in 2012. The entries are presented in chronological order. Click the "Next" button above to begin.

On Jan. 13, Captain Francesco Schettino steered the 60,000-ton Costa Concordia cruise ship off course and brought it close enough to the Tuscan island of Giglio to ground it on jagged coast.


The ship capsized, becoming the largest shipwreck in history -- twice the size of the Titanic at more than 900 feet long. Thirty-two people died in the chaotic evacuation, and Schettino became a lightning rod for international distain for abandoning the ship before everyone else was off.

Schettino is charged with manslaughter, causing the wreck and abandoning ship as the senior officer in charge before the evacuation was complete. He denies all the charges against him. Schettino will likely face trial, nonetheless, on those charges in 2013.


Opposition members said at least 45 people died in the shelling of the Baba Amr district of Homs on the day Colvin and Ochlik were killed. The Syrian regime blamed the journalists for their own deaths, claiming the strikes were legitimate targeting of suspected rebel forces.

But as Colvin's photographer Paul Conroy -- who survived the attack -- told CBS News, the death of such a high-profile American at the hands of the regime drove home the fact that Assad was targeting civilian areas with the full might of his military, trying, in Conroy's words, "to eliminate all resistance in Syria, and by eliminate, I mean eliminate. I don't mean silence, I mean kill, crush, maim, bury."


The journalists' deaths, and the complete lack of security encountered in trying to get the wounded out of Homs, also dramatically changed the way Western media outlets cover Syria's civil war. Assad's regime had already made it virtually impossible for independent journalists to operate in the country, and now with evidence that his military was targeting reporters who enter without his blessing, there was a new premium on accurate, timely information from Syria.

On June 14, CBS News senior security correspondent David Martin reported that, according to CBS News' tally, at least 2,000 American troops had died in Afghanistan. The war was in its 11th year.


As Martin reported, the death toll belies a far greater number of lives which have been forever changed by the war -- there are too many family members, friends and loved ones with hidden scars to even count.

The death toll continues to climb. A U.S. service member was killed by Taliban attackers at the gate to the Kandahar Air Base on Dec. 13, just hours after Secretary of Defense Leon Panetta visited the sprawling compound to discuss the ongoing war with top American commanders.

2013 will be the year of the withdrawal. By 2014, President Obama wants virtually all U.S. combat troops out of the country. About 60,000 troops remain at this stage. The complexities of pulling such a massive fighting force and all of the associated hardware out of Afghanistan -- and the very serious concerns that the Taliban is in fact rebuilding and reclaiming territory, will be the driving themes in the year to come.

On June 24, the Islamic fundamentalist Muslim Brotherhood's candidate of choice, Mohammed Morsi, was declared winner of Egypt's first democratic elections in more than a generation.

In his six months in power, Morsi has driven a wedge between his large, conservative Muslim base and the largely secular opposition by holding a national referendum on a new constitution which would cement the tenets of Islamic law into the nation's charter.

The Brotherhood was banned as a terrorist organization under long-time dictator Hosni Mubarak.

Now, the organization, and Egypt, have emerged as powerful players in the violent politics of the Middle East -- an Islamic fundamentalist organization essentially in charge of the most populous Arab state, and on Israel's doorstep.


So far, Morsi has said his government will respect the treaties in place with Israel, and he played a key role in negotiating a ceasefire between Israel and fellow Brotherhood members Hamas during the Gaza war which erupted in November.

While Morsi and the Brotherhood seem to be consolidating their hold on power in Egypt in the wake of the Arab Spring, a large and vocal portion of the population feels his government is ignoring their pleas for a more democratic society, and the crisis is not over yet.


When it was all over, the United States took a familiar spot atop the overall medal tally. Great Britain seemed to emerge almost as big a winner, however, having hosted a completely successful Games in spite of myriad warnings that the vast, densely-populated city which has a road system that dates back to Roman times and a public transport system which swells to capacity with every day's rush-hour, wouldn't be able to cope.

On Sept. 11, a date which already haunts the American psyche, the realities of a rapidly changing Arab world were again driven home in the U.S. with the deadly assault on diplomatic offices in eastern Libya.

On the evening of Sept. 11, members of local militant groups, allegedly with some degree of linkage to al Qaeda, attacked the U.S. consulate in Benghazi and a CIA office about a mile away. U.S. Ambassador Chris Stevens and three other Americans died in the attack.

Benghazi was the home of the Arab Spring uprising against dictator Muammar Qaddafi, and in the year after his capture and murder by rebel fighters, those local rebel groups became the de facto governing bodies of their neighborhoods and towns, including Benghazi. Many of these militias had motives more akin to those of al Qaeda than to any democratic uprising, but it remains unclear exactly who planned the attack on the consulate -- if it was a planned assault.


A political feud over the way the Obama administration and the State Department handled the release of information about the fatal attack -- which was first deemed to have likely started as a protest against an anti-Islam film made in the U.S. -- forced U.S. Ambassador Susan Rice to remove herself from consideration as the next Secretary of State.

Congressional investigations into how the attack happened, and how it could have been better handled, will continue well into 2013.

On Nov. 14, Israel assassinated the military commander of the Islamic militant group Hamas, Ahmad Jabari, in an air strike on the Gaza Strip, touching off a week of war that left at least 161 Palestinians, including dozens of civilians, dead. Five Israelis were killed in rocket attacks from Gaza and other cross-border violence.

It was the most significant fighting between Israel and the Palestinians in more than four years.


With a cease-fire -- negotiated largely by the new, Hamas-friendly government in neighboring Egypt -- holding between Hamas and Israel, the leadership of the other Palestinian territory, the West Bank, went ahead with a controversial bid for recognition as an "observer state" at the United Nations.

A significant majority of U.N. member states voted in favor of the bid by Mahmoud Abbas, the Western-backed leader of the Fatah faction, which controls the West Bank. But that vote makes "Palestine" an independent country only in the views of the nations which voted for the upgraded U.N. status. The situation on the ground remains largely unchanged -- Israel still controls, or attempts to control, the flow of goods and people into and out of both Palestinian territories.

In retaliation for the Palestinians' upgraded status at the U.N., Israel has pushed ahead with plans to build new homes in Jewish settlements in East Jerusalem and another contested area -- over the objections of Israel's allies in Europe, and, crucially, the United States.

On Nov. 15, China's ruling Communist Party officially named Xi Jinping as the country's next president, who will likely lead the world's most populous nation, and its 2nd largest economy, for the next 10 years.


Xi inherited a nation undergoing enormous change, as China tentatively tries to embrace some principles of a free market and grapples with the internet age while maintaining the centuries-old traditions of an all-powerful, unchallenged central government.

Xi and his top aides must try and sustain economic growth in the face of staggering problems: rampant political corruption; a widening gap between rich and poor; choking pollution; and a populace increasingly discontent about it all.

On Nov. 19, President Obama became the first U.S. President to visit the southeast Asian nation of Burma, also known as Myanmar, which had been isolated as a pariah state by the West for decades as its population languished under the harsh rule of a military dictatorship.


President Obama showered praise and promises of more U.S. help to Burma's new government -- if the nation keeps building upon its fledgling democracy. "Our goal is to sustain the momentum," he declared, adding that his historic visit was "not an endorsement " of the current Burmese government.

The new leadership has taken significant strides to usher in democracy, including the release of democracy icon Aung San Suu Kyi, who was quickly elected as a lawmaker after years of house arrest imposed by the military regime.

On Dec. 4, a monster storm made landfall in the southern Philippines with powerful winds and torrential rains that inundated the island nation, where thousands of people live in substandard housing in flood-prone valleys.

Benito Ramos, who heads the government's main disaster-response agency, said on Dec. 16 that previously unreported deaths had brought the death toll wrought by Bopha to 1,020.

A massive search for 844 other people, including hundreds of fishermen and villagers who went missing in flood-swept mountainside towns, was to continue through the Christmas and New Year's holidays.