LOS ANGELES (CBSLA) — Black and Hispanic students of color and those who were homeless or disabled were found to lag behind their more advantaged peers when it came to online learning, a new study of LAUSD's remote learning has found.

An independent analysis examined the results of online learning between mid-March – when schools across the country were shut down to stop the spread of coronavirus – and May 22 among students within the Los Angeles Unified School District, which serves more than 700,000 students.

The report's authors cautioned that the data should not be used to judge the quality or success of distance learning.

"Compared to more advantaged students, fewer middle and high school students who are Black, Hispanic, living in low-income households, classified as English learners, have a disability, are in the District's homeless program or are in foster care, participated across all measures of online activity presented in this report," the report said. "Low participation may show lost learning, which could take students years to recoup."

The report was an analysis of activity on Schoolology, an online course management system or "virtual classroom," by the district's middle and high school students. Schoolology allows students to communicate with their teachers, access course content and complete class assignments. Students had to submit an assignment, take a test or post a message to be considered active on the platform. Low participation was measured by at least one or two of those activities per week on average, and high participation was five per week on average.

The report found that while online participation improved from Week 2 to Week 8 – except among high school students -- the percentage of Black and Hispanic students active on the platform was much lower than their white, Asian, Filipino and multi-racial peers. At the peak of participation, only about 60% of Black and Hispanic students, respectively, participated on Schoolology, compared to about 80% of their peers in middle school, and about 75% of their peers in high school. 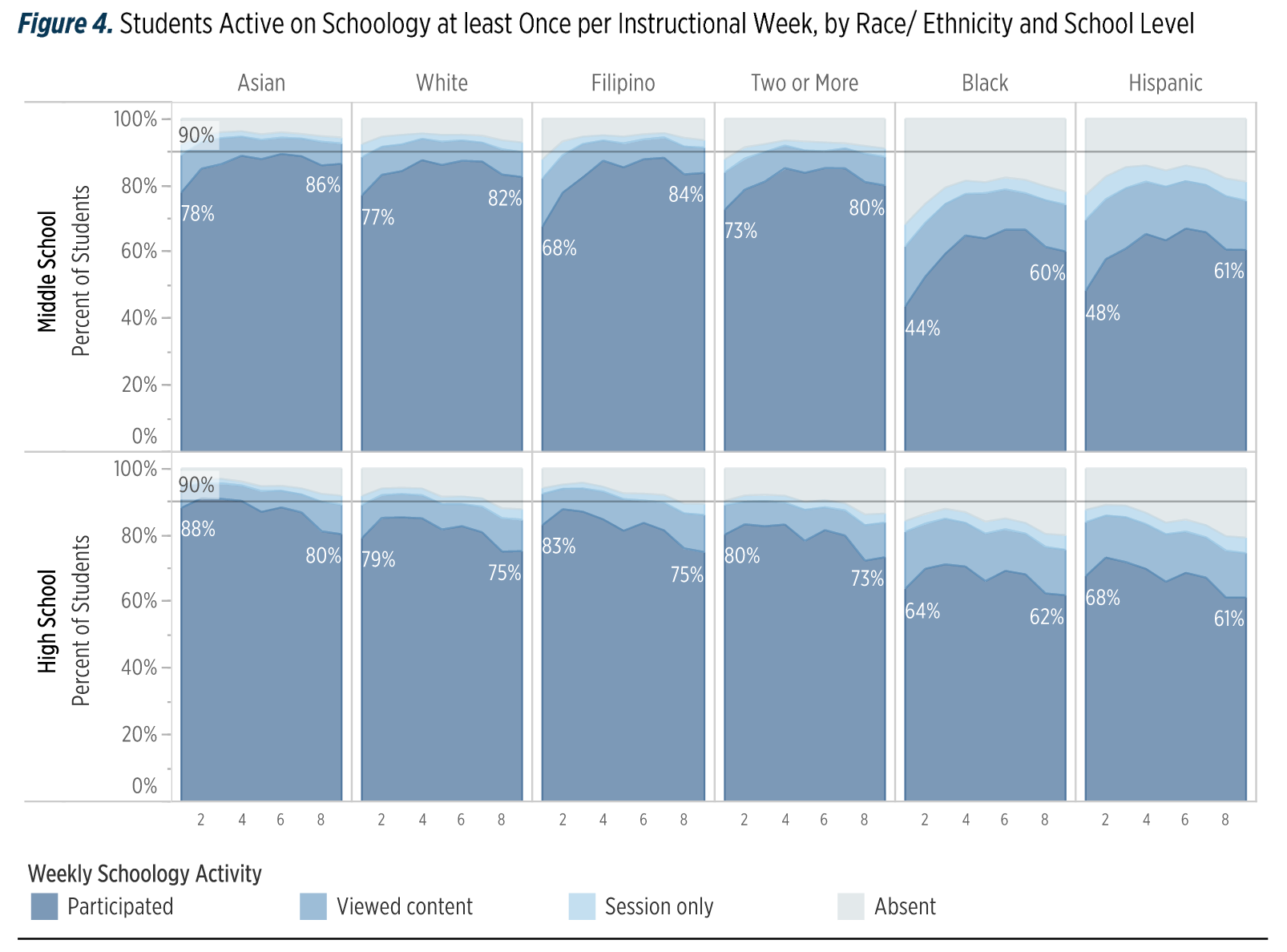 Among middle school students, 34% of English learners participated at the beginning of remote learning, growing to 48%, a marked contrast from 56% of English proficient students who started out online and grew to 67%. Among high school English learners, the number ticked down from 49% at the beginning to 48% by the end of May, compared to 72% of English-proficient high school students who started out learning online, and dropping to 66%.

Homeless students or those in foster care participated in similar numbers – 32% of middle schoolers and 50% of high school students dropped to 44% and 48%, respectively. 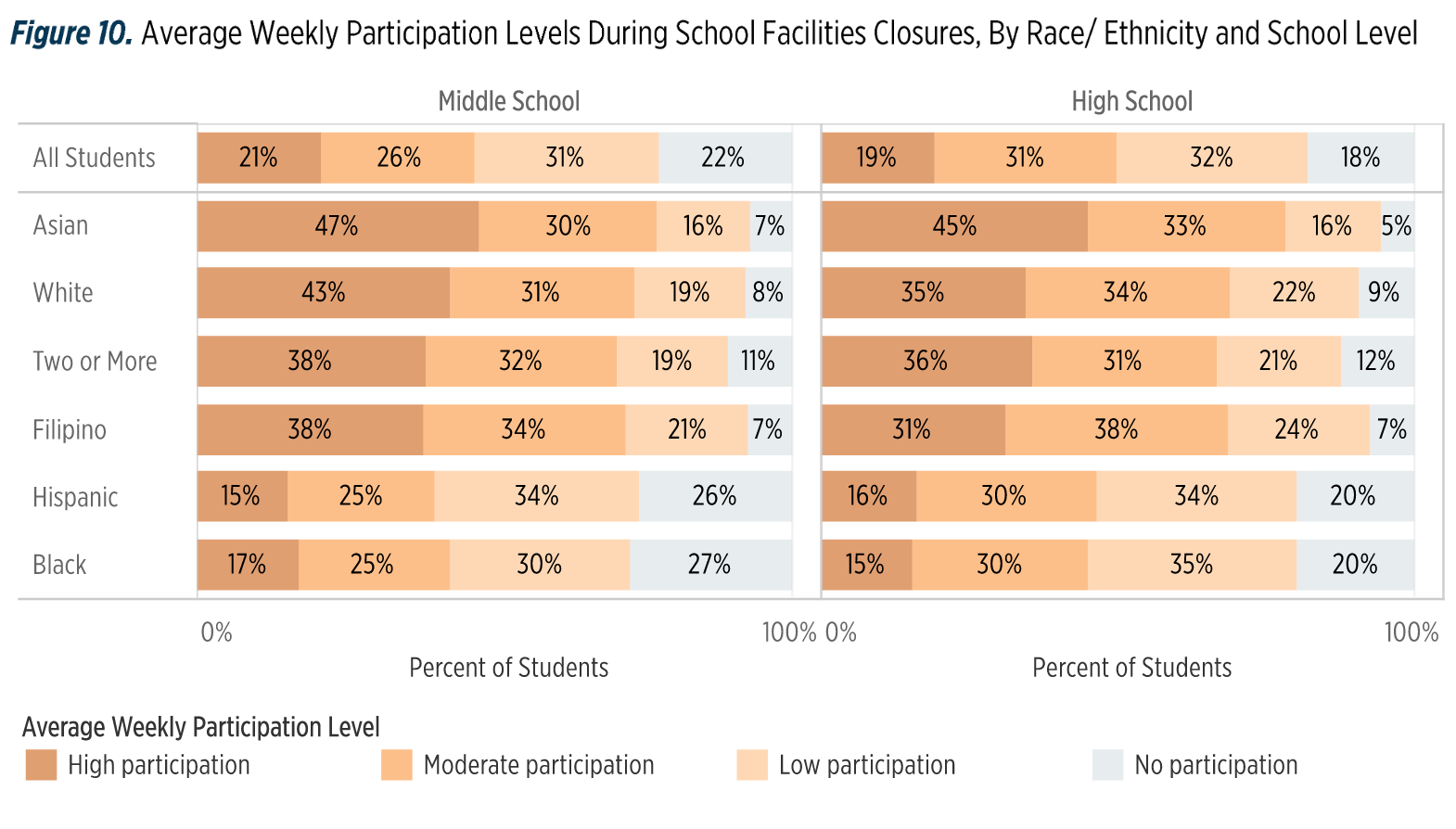 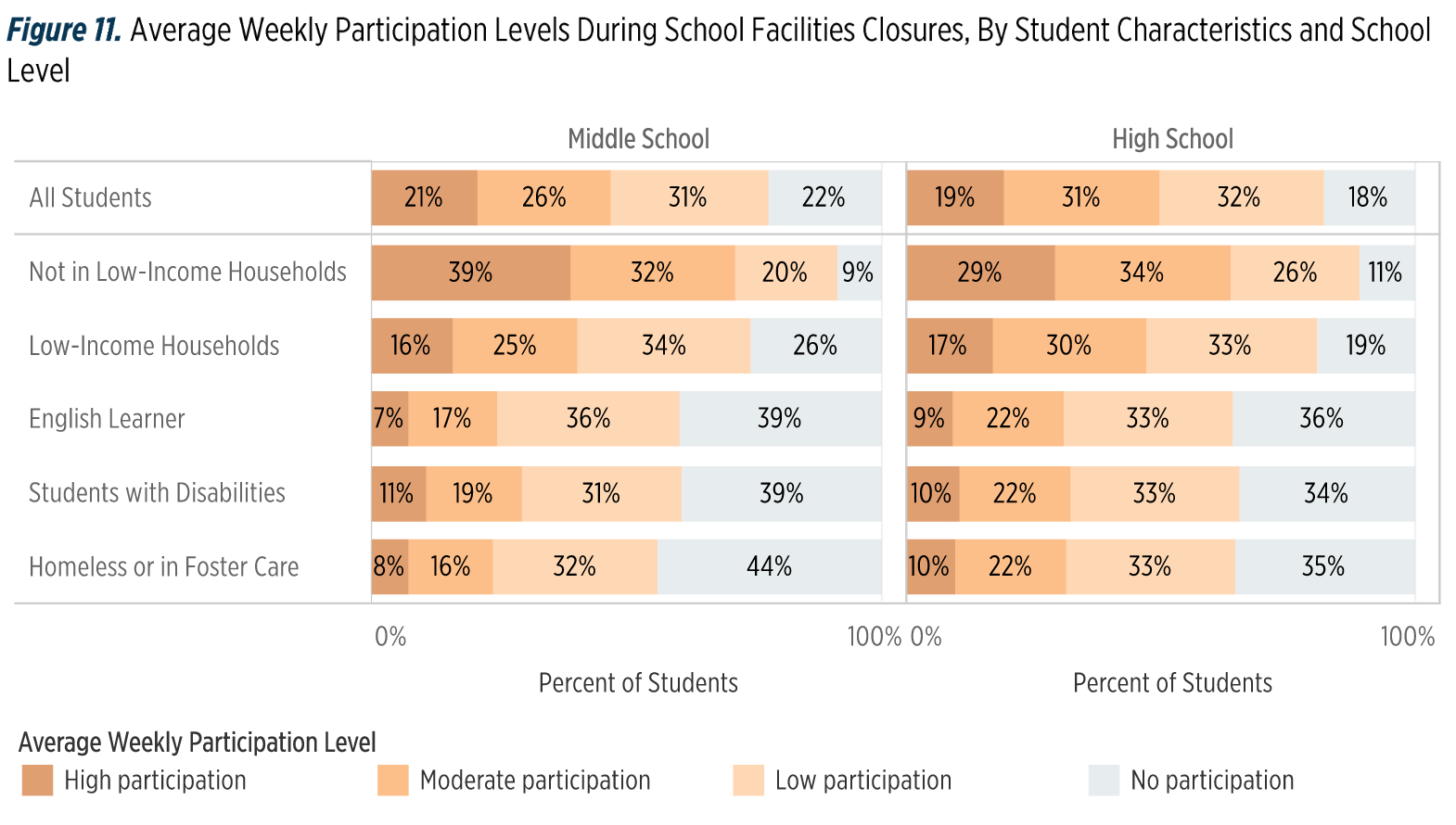 When remote learning prompted by the pandemic started in the spring, students and teachers were not required to interact daily, and the report's authors acknowledged that daily participation may not reflect actual student engagement. However, many districts – including LAUSD, Santa Ana, Pasadena, Glendale and Long Beach – have decided to continue with online learning for the start of the 2020-21 school year to keep students, teachers and staff safe. When school starts in the fall, state law requires verifiable daily participation or students will be documented as absent.

The report did not address elementary school participation.