LOS ANGELES (CBSLA) -- With many universities across the country starting the semester completely remote, students who signed leases to rent off-campus apartments are now struggling to get out of them — and the law is not on their side.

Before the pandemic, Aaron Brown of Inglewood was an honor student at Clark Atlanta University and a cornerback on the football team. In June, he signed a lease at an off-campus apartment complex, thinking he would be going back to school.

"The school said that everybody will be able to come on campus," he said. 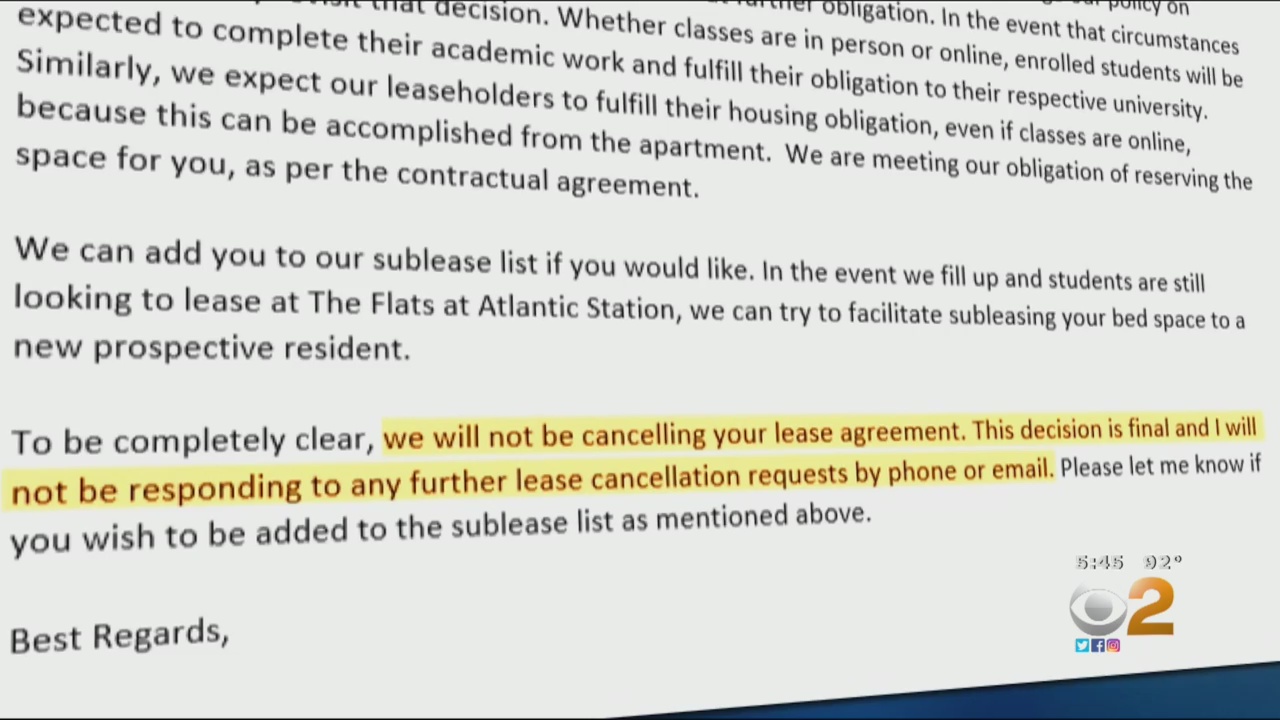 But a month later, the university decided to go remote for the fall semester, and Brown called the apartment complex.

"Hey, the school sent us an email that no one can come on campus at all, and I am an out of state student and I want to see if I can break my lease," he says he told the complex.

In an email, the property manager wrote: "We will not be cancelling your lease agreement. The decision is final."

He also told Brown he will not be responding to any further calls or emails.

"They are pretty much taking our money and running away," he said. "They are forcing us to pay knowing we can't go out there for school."

Marty Rudoy, a real estate attorney, said that students may have an out.

"There is a concept called frustration of purpose, where the purpose of the contract was to provide student housing and there is no need for student housing, maybe that's an out," he said. "There is also a concept in called force majeure, which means if there is an act of God, your performance could be excused."

If it is present in the contract, the force majeure clause may apply to the pandemic because it usually is applicable when circumstances beyond the person's control arise, making fulfillment of the contract on their end impossible or, at least, inadvisable.

Cal State Fullerton student Kaley Hanzich signed her lease back in February, well before any indications that COVID-19 would make such an impact this late in the year.

"It's kind of hard to assume that something like this could have happened and no one was thinking about this when we signed our leases," she said.

When her dad tried to cancel in July, he was told no. So, he hired an attorney.

Elena Popp, who works for the nonprofit Eviction Defense Network, said her office has been flooded with calls from desperate students stuck in leases.

"In the end, we think we need a legislative fix," she said.

Popp is telling families to walk away from their lease.

"We have a lot of concern for the mom and pop landlord that can't pay their mortgage," she said. "But these are major corporations. These are corporations that have the capacity to absorb these losses."

Both attorneys say the colleges also have a responsibility, because they refer students to these off-campus complexes. They think the colleges should try to work out a deal so students can be released from their leases.