If you've never gone to a classical music concert we've got the basic do's and don'ts to help you have a good time. Even if you're a seasoned veteran of the DSO you might still learn something.

Orchestra Hall is one of America's most acoustically perfect concert halls. For a time it was known as Paradise Jazz Theatre. It was initially built to be a movie and vaudeville house. The hall became a celebrated jazz venue, offering the best in jazz, bebop and blues. It's part of the Max M. Fisher Music Center that was added onto the hall in 2003.

Since its first concert in 1919, the DSO has become one of the most important cultural assets of Detroit. It's the fourth-oldest symphony orchestra in the United States and is internationally acclaimed. They offer a year-round performance schedule that includes classical, pops, jazz, young people's concerts and festivals. According to the official site, civic involvement is also key to their mission as they serve the community through music.

The Detroit Symphony's official site wrote this about Slatkin. Esteemed conductor Leonard Slatkin, called "America's Music Director" by The Los Angeles Times, became the DSO's 12th Music Director with the 2008-09 season. His international reputation as one of the extraordinary conductors in the world combined with his incredible musicianship and passion for educating young people has brought the DSO into a new era of reinvigorated performance and community engagement.

If you feel compelled to applaud during a performance, be sure that it's not just any quiet part in the movement. You'll know that it's okay to clap when the conductor turns to face the audience.

Try to arrive on time. If you are late, you will likely have to wait until a break between works. There is a TV in the atrium that you can watch the performance on until the usher seats you.

While there is no dress code, most people wear business casual attire like suits, sweaters, skirts etc... Formal attire is not required, so no need for a tux, but please leave the cutoff shorts and tank top in the drawer.

Things To Bring (And Not To Bring)

Camera - you'll want to get a photo of your group all dressed up, plus Orchestra Hall is a gorgeous facility. Keep in mind that photography or video recording of performances is strictly prohibited.

Kids - Children are welcome, but they'll need a ticket. If they aren't old enough to sit through a classical performance try one of the youngster oriented events including Young People's Concerts or Tiny Tots. YPC performances start at 11 a.m. in Orchestra Hall, last approximately 70 minutes and are recommended for children ages six and up. The Tiny Tots performances begin at 10 a.m. in The Music Box, last approximately 45 minutes and are recommended for ages 0-6.

Leave the cell phone in the car. Hearing a ringtone during a performance is like a fly in the soup. No matter how savvy you think you are with your phone and setting it to vibrate it's not worth the risk of looking like a total jerk. 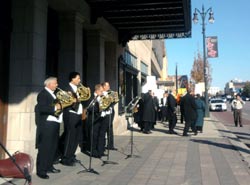 In 2010, the musicians went on strike due to pay cuts. The 2010-2011 season was canceled by management, but later that year both sides of the table came to a compromise and resumed the season with a free concert.

Read more about the musicians' strike:

Driving Directions
From the East: Take I-94 west to the Woodward exit. Proceed south on Woodward.

From the North: Take I-75 south to the Mack Rd. exit. Go west on Mack to past Woodward to Cass Avenue and turn right. Then turn right onto Parsons. Or take the Lodge (M-10) south to the Forest/Warren exit. Take Forest east to Cass and turn right, then left on Parsons.

From the South: Take I-75 north to the Mack Rd. exit. Proceed west on Mack past Woodward to Cass Avenue, turn right. Turn right to enter Parsons.

The Orchestra Place Parking Structure is just south of the Max and costs $7. For $12 you can park valet. If you're going out for a fancy night on the town -- why wouldn't you valet?!

Also find limited parking at the Whitney Restaurant lot between Canfield and Forest.

The DSO offers shuttle bus service to Coffee Concerts from selected locations for $12. Call (313) 576-5130 for information or download an application.

Greenfield Village is the setting for a patriotic themed concert every summer. Hear Tchaikovsky's "1812 Overture" and other musical Americana topped off with a fireworks show.

DSO at the Ford House

The historic Ford House's lakeside lawn is a magical location for music. This performance also ends in a fireworks show.

Enjoy the hustle and bustle of Detroit and get the steak sandwich at Union Street. Impress the socks off your date at Cliff Bells or The Whitney.  Atlas Global Bistro offers fine dining and inventive cuisine. Relax with a great local beer in a laid back setting at Traffic Jam & Snug Restaurant or Woodbridge Pub.

Food at the DSO?

The Max Fisher building offers basic concessions like candy, pop, beer, wine and water for most events, but you'll pay extra for the convenience. Remember that food or beverages are not allowed in the hall.

With ticket prices being slashed starting with the 2011-2012 season the cost of a night at the orchestra is similar to taking the family to a movie. Plus if you're a student you can get the All-Access Pass which gets you into the entire year's worth of performances for 25 bucks!

View the DSO calendar and get tickets.

The State of the City address is held at Orchestra Hall.

In 1922, Gabrilowitsch led the orchestra and guest pianist Artur Schnabel in the world's first radio broadcast of a symphonic concert on WWJ-AM.

Looking to hire an amazing musician for your next event? Some DSO musicians will do freelance work. Contact the Orchestra Personnel Manager Stephen Molina via email.