HIGHLANDS RANCH, Colo. (CBS4) - A national home improvement chain with locations in Colorado has settled a $14 million class action lawsuit over claims it was acting unethically in the sale of formaldehyde treated flooring. The lawsuit claims Floor and Décor mislabeled flooring as complying with formaldehyde limits.

According to the National Cancer Institute, formaldehyde is a known carcinogen and prolonged exposure to the chemical can cause cancer. As part of the settlement, Floor and Décor did not admit any fault and has always contended its products are safe.

"At best, this was deceptive to the public," said former Floor and Décor employee Scott England. "This seemed to be very deceptive behavior."

The behavior England is talking about was the relabeling of Chinese-made laminate flooring when he worked as an assistant manager at the Highlands Ranch Floor and Décor store in 2015.

"They simply needed to get this done as quickly as possible," said England. He said the company reacted quickly after a bombshell 60 Minutes report about Lumber Liquidators, one of Floor and Décor's competitors. The 2015 story claimed Lumber Liquidators was selling laminate flooring that tested off the charts for formaldehyde emissions.

Just days later, England said employees at his store were offered unlimited overtime to black out the words "Made in China" and "California 93120 Compliant for Formaldehyde" on laminate flooring from China. He says they were instructed to replace the labels with new ones with no mention of formaldehyde compliance.

After replacing the labels, England said they slashed prices on the flooring by 60 percent.

"They fire saled it," he said. "They were just dumping this material on the public."

"Thousands of square feet, palates of materials were thrown away."

England said crews from out-of-state were brought in to dump any remaining Chinese-made laminate flooring that had not sold.

An employee at Floor and Décor's Arvada store said the same relabeling, repricing, and dumping happened there, too. She requested her name not be used. The Arvada employee said she took part in the relabeling because she was afraid she'd be fired if she asked questions or refused to participate.

A former cashier -- who also did not want her name used -- told CBS4 she was instructed to "redirect customers to a manager" or tell customers "everything was ok," when people asked about formaldehyde or the safety of the flooring. She said she "truly thought she was lying to the customers" after witnessing the relabeling of the products.

Receipts for the relabeled products – obtained by CBS4 – were later changed to say, "May not meet California air Stnds".

At that point, England started asking pointed questions of his bosses.

"If there is nothing wrong with these products, why are we throwing it away? Shouldn't we be selling them?"

England said his bosses had no answer.

Later, England said he was fired for being late to work.

Floor and Décor has now settled a $14 million class action lawsuit and wouldn't answer many of CBS4's specific questions about the relabeling and the dumping.

The company issued this statement: 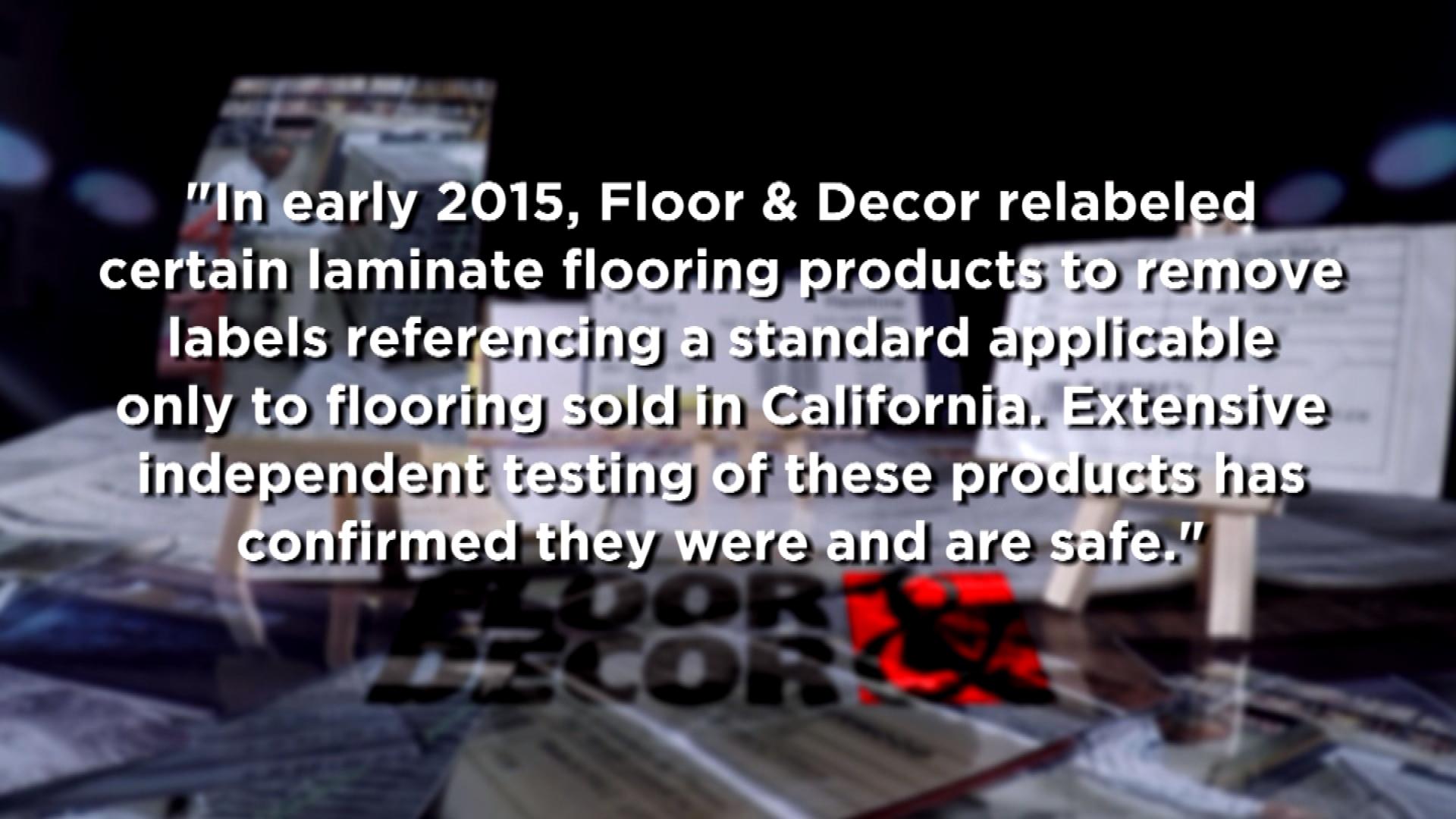 "In early 2015, Floor & Decor re-labeled certain laminate flooring products to remove labels referencing a standard applicable only to flooring sold in California. Extensive independent testing of these products has confirmed they were and are safe. Floor & Decor has an industry-leading compliance program, utilizing independent, third party inspectors and laboratories to ensure the safety and quality of its products."

People who purchased Chinese made laminate from Floor and Décor may be eligible for a cash reimbursement or store credit. Claims must be postmarked by March 7, 2017.

More information on the settlement is available at fdsettlement.com.