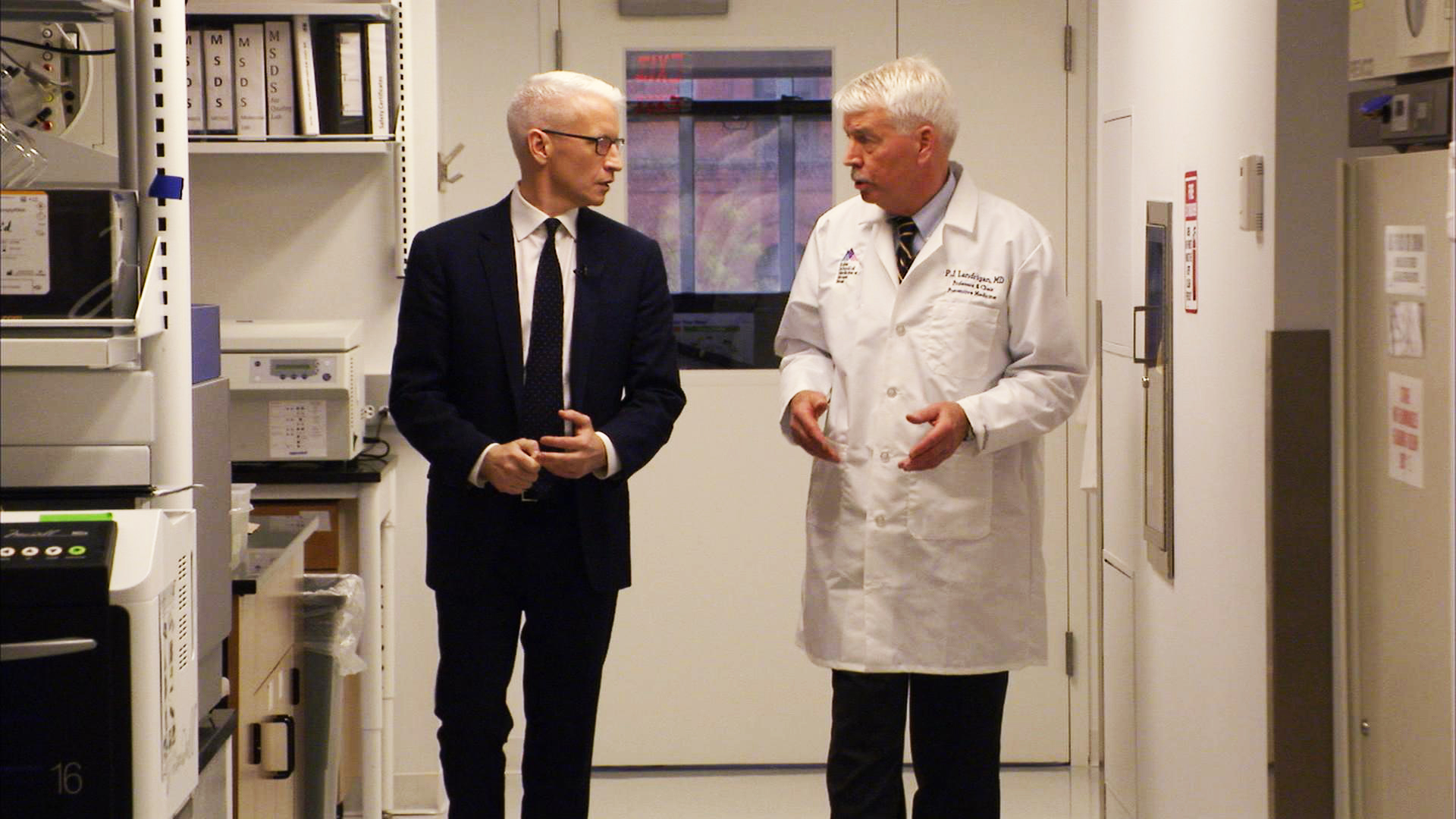 Update: For more on the tests used to investigate Lumber Liquidators, click here.

The California Air Resources Board has updated information for consumers. Please find that information by following this link: http://www.arb.ca.gov/html/fact_sheets/composite_wood_flooring_faq.pdf

The following is a script from "Lumber Liquidators" which aired on March 1, 2015. Anderson Cooper is the correspondent. Katherine Davis and Sam Hornblower, producers.

Lumber Liquidators is the largest and fastest-growing retailer of hardwood flooring in North America, with over 360 stores in 46 states and revenues of more than a billion dollars a year. But hardwood isn't the only product they sell. More than 100 million square feet of the company's cheaper laminate flooring is installed in American homes every year.

Lumber Liquidators is a U.S. company, but much of its laminate flooring is made in China, and as we discovered during our investigation, may fail to meet health and safety standards, because it contains high levels of formaldehyde, a known cancer causing chemical. Lumber Liquidators insists its Chinese-made laminate flooring is safe, but it doesn't appear that way based on what we learned from our own reporting and from the work of people like Denny Larson.

Anderson Cooper: You want the company to remove all the flooring?

Denny Larson: Every single board. At their cost and replace it with clean flooring.

Anderson Cooper: How much is that gonna cost?

Denny Larson: You know what? I don't care. Because they're guilty of selling people product that could make them sick.

These worried California homeowners, who didn't want to be identified, aren't waiting for Lumber Liquidators. They are ripping up their floors now. But many can't afford to replace the flooring on their own.

Denny Larson: They don't know what to do. They have flooring that they think is making them sick.

Anderson Cooper: Do you have any idea how much of this wood is in people's homes right now?

Richard Drury: We believe there are probably tens of thousands of households in California that have installed Lumber Liquidators Chinese laminates that may exceed formaldehyde standards

Richard Drury: The average level in Lumber Liquidators products that we found was over six to seven times above the state standard for formaldehyde. And we found some that were close to 20 times above the level that's allowed to be sold.

Denny Larson: It's a huge amount

Richard Drury: It's a startling amount. It was so high, in fact, that one of our test labs thought their machine was broken.

Anderson Cooper: The lab itself thought...

Denny Larson: It hit the upper limit on the radar gun. And they thought it was broken.

Dr. Philip Landrigan: It's not a safe level, it's a level that the US EPA calls polluted indoor conditions.

Anderson Cooper: Would you want that in your home?

Dr. Philip Landrigan of N.Y.'s Mt. Sinai Hospital, specializes in environmental pediatrics and exposure to toxic chemicals. He's talking about the results of another kind of test Drury and Larson conducted measuring the concentration of formaldehyde emissions coming off the laminates into the air of a typical home.

Dr. Philip Landrigan: I would say long-term exposure at that level would be risky because it would increase the risk for chronic respiratory irritation, change in a person's lung function, increased risk of asthma. It's not going to produce symptoms in everyone but children will be the people most likely to show symptoms at that sort of level.

Children are featured prominently in Lumber Liquidators ads, and the company likes to promote the donations of flooring they make to Habitat for Humanity, Ronald McDonald House Charities, schools, and community centers.

And on their website, Lumber Liquidators promises that all of their flooring "meets or exceeds rigorous emissions standards" and they say "we not only comply with laws, we exceed them."

Anderson Cooper: Is that true?

Richard Drury: That is not a true statement.

Anderson Cooper: Is it legal to sell these boxes of wood in California?

Richard Drury: No, it is not. It is illegal to sell these boxes of wood in California. We hope that they will not sell these products anywhere in the nation, because they are above the health-based standards the state law has set.

Drury and Larson, who are backed by short sellers -- a group of Wall Street investors who are betting the company is overvalued -- have sued Lumber Liquidators, accusing them of violating California's toxic warning statute. Drury has also launched a class action lawsuit against the company.

It is legal for flooring to contain formaldehyde. The chemical is present in some of the cheap glues used in factories like this one in China. This footage was recorded by investigators hired by 60 Minutes.

How much is inhaled by homeowners depends on how much formaldehyde is in the glue and how much ventilation is in the home.

Denny Larson: You're in a chamber so you're living with it. You're sleeping in there. And you're constantly exposed. That's the threat. The constant exposure to a potent carcinogen over a long period of time.

Because formaldehyde can cause myeloid leukemia and nasopharyngeal cancer at high levels and respiratory issues as well as eye, nose and throat irritation at even low levels, California has strict standards for how much of the chemical the core boards in laminate flooring can emit.

Every box of laminate flooring Lumber Liquidators sells carries this label - stating its CARB Phase 2 Compliant - CARB is an acronym for the California Air Resources Board, which sets strict standards for formaldehyde emissions in wood flooring. Congress adopted California's limits when it passed the Formaldehyde Standards Act in 2010. That law is scheduled to take effect nationwide this year.

Drury and Larson only had wood tested that was being sold in California. But we wondered if the Chinese-made laminate flooring that Lumber Liquidators is selling nationwide also has high levels of formaldehyde. So we went to stores in Virginia, Florida, Texas, Illinois and New York, and bought 31 boxes of it.

We sent the samples for testing at two certified labs. It turns out of the 31 samples of Chinese-made laminate flooring, only one was compliant with formaldehyde emissions standards. Some were more than 13x over the California limit. Both labs told us they had never seen formaldehyde levels that high.

But when we took those test results to Lumber Liquidators' founder and chairman Tom Sullivan, he refused to accept the methodology as valid and points out the company is not required by law to test their finished products like we did.

Tom Sullivan: It's not a real world test of the laminate - it's not the way it's used.

Tom Sullivan: We will do whatever the regulations are.

Anderson Cooper: I just don't understand how a group can do tests on your Chinese-made laminates and every single one of those failed to meet the emissions standards.

Tom Sullivan: People have different reasons for this test. This is a group of lawyers who are suing us, selling short on our stock.

Anderson Cooper: But the short sellers are not conducting this test, it's these certified labs.

Tom Sullivan: But it started with short sellers.

One of the first people to raise questions about Lumber Liquidators back in 2013 was Whitney Tilson, a Wall Street hedge fund manager. He has shorted the company's stock but is not involved in any lawsuit against it.

Whitney Tilson: In 16 years of professional money management, I've seen hundreds of companies do all sorts of bad things to get their stock prices up. But this has got to be the worst.

Whitney Tilson studies the workings of companies he's interested in investing in and he noticed the profit margins at Lumber Liquidators seemed unusually high compared to its competitors.

Anderson Cooper: Because it's hard to have your profit margin double in two years?

Whitney Tilson: Exactly. It's almost unprecedented for a company.

Tilson suspected the company might be breaking the law. He learned they were under federal investigation for allegedly buying timber illegally logged in Russia. U.S. agents had raided Lumber Liquidators' headquarters in September 2013. The company denies buying illegally logged wood but announced just this week the Department of Justice may file criminal charges against them.

Six months after he bet millions the stock would go down, Whitney Tilson got tipped off by someone familiar with Lumber Liquidators' operations' in China, who said he was missing the bigger story.

Whitney Tilson: The much bigger story, he said is that Lumber Liquidators was almost certainly purchasing formaldehyde-tainted laminated flooring in China.

Whitney Tilson: The answer is greed. Plain and simple. Its cheaper and-- it reduces the cost by about 10 percent.

Anderson Cooper: Which in a business with these kinds of profit margins - 10 percent means - it's a lot of money?

Tom Sullivan: Our goal is to sell a good product at a good price. And we don't get the price by skimping on anything. We get the price by low overhead, huge volume and being very efficient at what we do. And we're never gonna sell something unsafe.

Anderson Cooper: Do you trust your mills in China?

Tom Sullivan: But our specs are to make it to California standards.

But for months, we had been hearing from former Lumber Liquidators employees, suppliers and industry competitors that their Chinese-made laminates are not being made to California standards. So we sent our investigators undercover to the city of Changzhou, the laminate flooring capital of the world.

Employees at the mills openly admitted that they use core boards with higher levels of formaldehyde to make Lumber Liquidators laminates, saving the company 10-15 percent on the price. At all three mills they also admitted falsely labeling the company's laminate flooring as CARB 2, meaning it meets California formaldehyde emissions standards, and the new U.S. federal law.

At this factory, the general manager told investigators Lumber Liquidators is one of their biggest customers.

[Manager: This is a best-seller for Lumber Liquidators.

Investigator: How long have you been selling this?

Investigator: Is this CARB 2?]

CARB 2 means it's compliant with California law. But listen to what the general manager told us.

Investigator: Can I get CARB 2?

Manager: Yes, you can. It's just the price issue. We can make CARB 2 but it would be very expensive.]

And that's the same thing the undercover team was told at all three mills they visited.

[Investigator: All this stuff here, Lumber Liquidators... All their labeling is CARB 2 right? But it's not CARB 2?

Anderson Cooper: Employees at all three mills told us the laminates they make are not CARB 2 compliant. I want you to look at this....

We shared some of our hidden camera footage with him.

Tom Sullivan: I don't know the whole situation here. I will guarantee we'll be in that mill tomorrow and test it. And that is not anything we can condone in any way, to save a cent.

Anderson Cooper: This concerns you?

Anderson Cooper: Is this acceptable to you?

Tom Sullivan: If it's true, no.

Tom Sullivan: That would be if that's true.

Anderson Cooper: Nobody's ever reported this to you?

Tom Sullivan: It could, yes.