Now that our Thanksgiving football festivities are in the books, we can turn our focus to Week 12's main event: Manning vs. Brady round... wait. What? He's not playing? Well, that sucks.

Brady vs. Manning has been the high watermark of nearly each NFL season for the better part of the last 15 years. We watched in the early years as Brady dominated the Manning-led Colts time and time again when it mattered most. We watched as Manning finally exercised his Patriot postseason demons with a 38-34 victory over Brady's Pats in stunning come-from-behind fashion. We watched Peyton complete his even more miraculous comeback, one from multiple neck surgeries. Then we watched him don a new uniform, and pick up the rivalry with No. 12 right where it left off without missing a beat.

Father Time hasn't been able to touch Tom Brady, but now we're watching him have his way with Manning. The harsh reality is that this rivalry might just be over. But let's save the tears and compilation videos and the inevitable 30 for 30 on these two for another day and discuss the upcoming Manning-less game between the Broncos and the Patriots, which is still the best game on the docket this weekend.

Here's a look at that matchup along with a few other NFL games you're going to want to be sure to tune in to this weekend.

With injuries piling up and the score differential between the Patriots and their opponents narrowing week by week it's clear that the Patriots are unbeaten, but they're not unblemished. Four of the Patriots' last six games have been decided by a score or less and it's highly likely we'll be seeing another tightly contested game this Sunday. The Patriots, who already lost No. 1 wideout Julian Edelman for the foreseeable future, might be missing his replacement, Danny Amendola, when the Pats head to the mile high city.

The injuries to the Patriots' offensive line must have the Broncos' ferocious pass rush licking its chops. The Buffalo Bills, a decidedly lesser defensive unit than the Broncos who are ranked No. 1 in nearly every defensive category, had just one sack on Brady but over 10 quarterback hits on Monday night. The Bills only have 15 sacks on the year while the Broncos lead the league with 34, meaning Brady might be seeing a lot of DeMarcus Ware and Von Miller and Co.

The other big story is, of course, Brock Osweiler at quarterback for the Broncos. Can he repeat this past weekend's squeaky clean performance and lead the Broncos to victory? Or will Bill Belichick, a man known for tormenting young quarterbacks, find Osweiler's kryptonite and secure a Patriots victory? It lacks the punch of Manning-Brady, but this one will still be a fantastic matchup.

The Falcons have been struggling mightily as of late, to say the least. They've dropped four of five since starting the year 5-0 and are on a three game losing streak. Their latest loss to the Colts on Sunday was possibly the most heartbreaking of the three. Matt Ryan's fourth quarter pick six and the loss of breakout star running back Devonta Freeman were too much for the Falcons to overcome as they watched Adam Vinateri drain a game-winning 43-yard field goal with 52 seconds left to put Atlanta away. 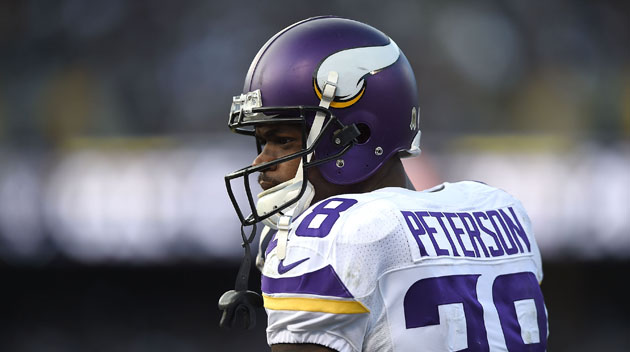 Meanwhile, the Vikings are coming off a crushing loss of their own and have a turnover to blame for it as well. Adrian Peterson, who has been the Vikings' workhorse in his first year back from a season-long suspension, fumbled inside the Packers' red zone in the fourth quarter with the Vikings down two scores, which just about sealed the game. Now the Vikings have to find a way to keep pace with the Packers the rest of the way if they want their matchup against Green Bay the final week of the season to mean anything.

Both of these teams trail in their divisions right now and might just end up needing a tie breaker against the other for a playoff berth, making this a crucial NFC showdown.

This will be the first time these two teams meet in the Russell Wilson era, which is a good thing for Seattle considering the last two times these teams met the Seahawks were shutout. However, things have changed considerably since then and so have the circumstances of this game. Those two were played in Pittsburgh and this one will be played in Seattle, giving the Seahawks that all-important '12th man' edge.

The importance of this game can't be overstated for either team. The Seahawks are still on the outside looking in when it comes to the playoff picture, but can basically be assured of a playoff spot thanks to the mediocrity of the NFL this year with a 10-win season.

The Steelers meanwhile are not only in control of a Wild Card spot but have a legitimate chance to narrow the gap between them and the Bengals for the NFC North crown. Matchup wise, it'll be fun watching Ben Roethlisberger try and handle the Seahawks' defense and it'll be a blast watching Antonio Brown square off against Richard Sherman for 60 minutes.

Give the Bills some credit, they hung with the defending champs on Monday night. However, a loss is a loss, and the Bills have to recover on a short week against one of the hottest teams in the league if they want to keep their playoff hopes alive.

The Chiefs, on the other hand, have been on an absolute tear as of late. Alex Smith has been efficient and has thrown only three interceptions compared to 10 touchdowns. The Chiefs have also managed to get by without Jamaal Charles with thanks to the combination of Charcandrick West and Spencer Ware.

On the other side of the ball, the Chiefs' defense has morphed into a fantastic unit and they proved that this past week by limiting the high-flying Chargers offense to just three points and 201 yards of total offense.

The Bills might be without quarterback Tyrod Taylor for this one and the Chiefs' defense is firing on all cylinders. That could spell trouble for the Bills, but look for this to be an extremely low-scoring affair that will be anyone's ballgame until the final possession.

Bryan Altman is, for some reason, an unabashed fan of the Rangers, Jets and Mets. If he absolutely had to pick a basketball team it would be the Knicks, but he’d gladly trade them for just one championship for either of his other three teams.