No matter how you slice it, this week's game will be difficult for Denver. Yes, the Broncos are riding an NFL-high eight-game winning streak by playing well in all three phases of the game, and they'll have to bring that all-around production to Baltimore this Sunday. That's because the Ravens are a team always on the attack, on both sides of the football. 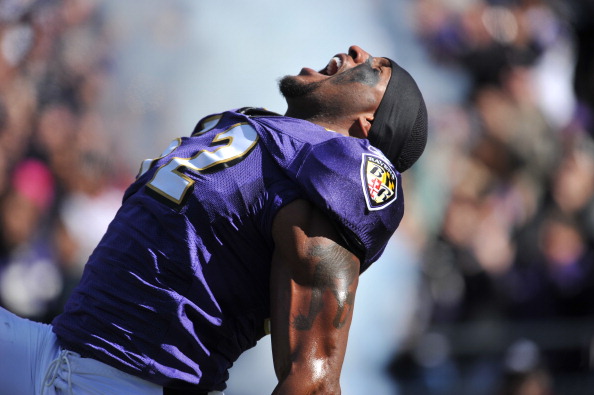 Joe Flacco has continually improved throughout his career, and is arguably playing the best football as a professional this season. He's confident, believing he deserves to be considered one of the best quarterbacks in the NFL, though his numbers don't yet reflect that status. Flacco's thrown for 3,220 yards and 18 touchdowns compared to nine interceptions with six fumbles, far too many turnovers to be among the top tier. When he can protect the ball though, Baltimore's offense thrives. He has two talented receivers to toss the ball to in veteran Anquan Boldin and speed freak Torrey Smith. Boldin is a physical receiver, using his size to gain positioning, and he leads the Ravens with 58 catches for 828 yards with four scores. Smith is more the deep threat, with 43 receptions for 753 yards and seven touchdowns, while tight end Dennis Pitta is the possession receiver over the middle.

Of course, the Ravens only ask Flacco to throw to bring balance to their offense, because runner Ray Rice is the real deal. Rice runs with fervor, he's ferocious and won't go down without a fight, which is amazing considering his smallish stature (5'8" 220 pounds). The fifth-year star averages a fantastic five yards per carry, and he's improved that to a stellar 6.2 yards per rush during the crunch time of December. And just to make himself even more difficult to defend, Rice catches passes out of the backfield as well, making him a threat to go the distance from nearly anywhere on the football field.

Where Baltimore strikes the most fear into opposing teams is on defense. All-time great Ray Lewis (triceps surgery) is eligible to play this week, which would bring a big-time boost to Baltimore's defense, as it would if Terrell Suggs (biceps) can go as well. Both of them on the field again would be scary for Denver, especially if right guard Chris Kuper must sit again with the injured ankle that's hampered his play for six weeks. Lewis and Suggs can do just about anything anyone could hope out of a linebacker; rushing the quarterback, dropping into coverage and coming up to hit hard in the run game. No matter which team you root for, they're a fun, fearsome duo to watch.

The Ravens don't just have possible future Hall of Famers at linebacker either, but on the defensive line and secondary as well. Defensive tackle Haloti Ngata is probably the most dominant DT in the National Football League today. He's a massive man, at 6'4" 335 pounds, who usually eats up two blockers and still finds ways to shed them to make tackles in the backfield. Ngata is fourth on the team with 4.0 sacks, and the massive man has even defended a pass. Safety Ed Reed knows all about defending the pass, enjoying another stellar season with four interceptions, 11 throws knocked away and he's even scored once. Reed's experienced, athletic and he hits extremely hard, making both he and Ngata key players Denver must prepare to go to battle against.

And if that weren't enough, the Ravens have a great return man in Jacoby Jones, who has one punt and two kickoff returns for a touchdown this season alone.

When the Broncos line up to play in Baltimore this Sunday they'll have everything going against them—it's a road game, on the East Coast, with rain probable, in Baltimore where they are 0-5 all-time—making this contest a great measuring stick just before the playoffs begin.

Rich Kurtzman is a Denver native, Colorado State University alumnus, sports nerd, athletics enthusiast, and competition junkie. Currently writing for a multitude of websites while working on books, one on the history of the Denver Broncos and Mile High Stadium. Find more of Rich's Denver Broncos pieces on Examiner.com.