(CBS) We know what it feels like. It feels like a complete waste of a brilliant pitcher's career so far.

White Sox left-hander Chris Sale is a rare healthy, consistent true ace. There are perhaps 10 or 12 of them in all of baseball. You can count them among yourselves and debate the bottom few as you like, but by any measure, Sale is in rarified air.

The White Sox struck gold. They intelligently nailed the No. 13 pick of the 2010 draft right to an extraordinary degree. Despite industry-wide speculative mechanical concern, Sale has had zero major arm troubles. He has made at least 26 starts in every season as a starter and been an All-Star five years running.

In terms of actual value to an organization, he's even better than that. Sale has been absurdly cheap, paid on his initial rookie scale and then signed to a master stroke of a team-friendly contract.

He's reached his financial pinnacle so far: 58th in 2016 salary among all pitchers. He's right between Phil Hughes and Jon Niese.

The White Sox have already played through a large window in an attempt to capitalize upon this incredible asset. That feeling of missed opportunity (so far) demands some context. So I asked two favorite stat-passionate Twitterati for a dive toward proving this.

Here's the top 30 in bWAR for pitchers by Sale's age of 27, via Baseball Reference: 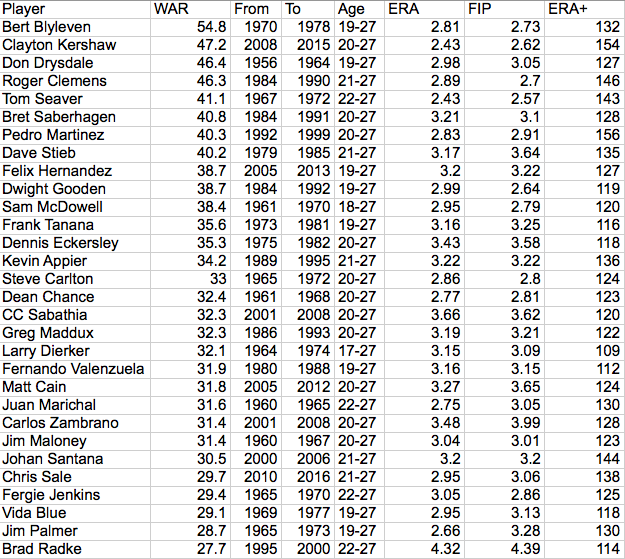 Of those 30, eight hadn't pitched in a playoff game to that point.

Now, here are the top 30 pitchers by age 27 who didn't pitch in the playoffs: 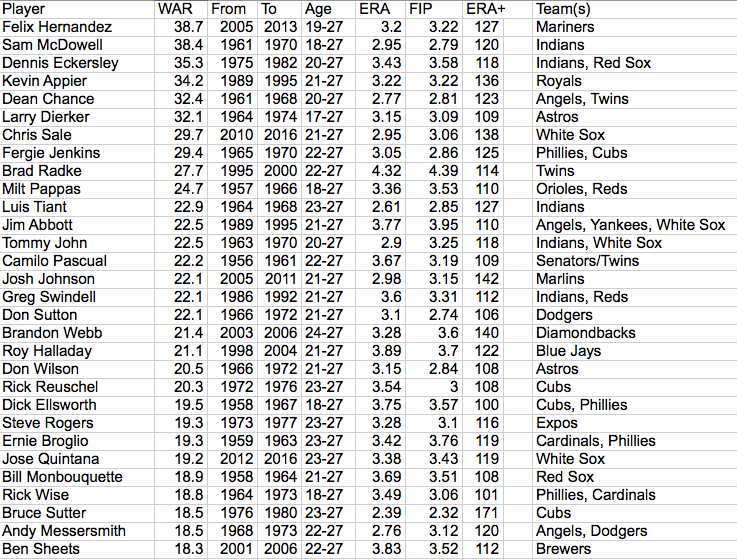 That's a somewhat ignominious list. The fact that King Felix sits atop affirms his dispiriting kinship with the seventh-ranked Sale. How many calls do you suppose Seattle sports radio fielded about trading Felix to reboot the Mariners?

Hey look, there's White Sox left-hander Jose Quintana at No. 25. He and Sale are one of three sets of playoff-less teammates.

The 1960s Indians couldn't win the AL pennant amidst the great early careers of Luis Tiant, "Sudden" Sam McDowell and one year of Tommy John. And the 1976 Cubs finished fourth with the unsupported Rick Reuschel and Bruce Sutter; the Cubs were second-to-last in team ERA.

Through the prism of individual accolades, Sale will certainly finish among the top six in 2016 Cy Young voting for the fifth consecutive season. No one has ever done that. Granted, the award has only been around since 1956 (it was split into one for each league since 1967), and there were fewer voters in the early days. But Sale will do something no "immediate ace" has ever done.

Let's expand the service window by a year to see who may have come close.

Sale and Roy Oswalt are the only starting pitchers to be top six in Cy voting for five of their first six full seasons. However, Oswalt started three Astros games in the 2004 playoffs in his fourth season and was then MVP of the 2005 NLCS in his fifth season. (He did give up five runs in the Game 3 made famous by Geoff Blum, if a White Sox fan is in need of momentary solace.)

Let's try to lengthen this list further by subtracting a year of excellence from the Sale/Oswalt achievement.

Mussina started two playoff games for Baltimore in his sixth season. Hershiser started twice in the postseason for the Dodgers in his third season, then had an all-time great run in his fifth year to win both NLCS and World Series MVP.

Valenzuela started in three different series as rookie Dodger in 1981. (Remember the strike year split-season champions playing a best-of-five?) Then he pitched in two more postseasons before he was 24.

Sale's latest moment of playoff race consequence came in Game 158 in 2012, a 10-4 loss to the Rays that widened the Tigers' division lead to two games. He gave up five runs on seven hits in 3 1/3 innings. As that season finished in bitter disappointment four days later, the 23-year-old Sale surely envisioned himself getting more chances to carry his team deep into the fall.

The White Sox fielded phone calls aplenty last week in regards to trading their ace ahead of Monday's non-waiver trade deadline. After not doing so, general manager Rick Hahn spoke about re-opening conversations with 29 teams in the offseason. It's obviously time to truly consider the once unthinkable.

Because even with the advantages that come with a low-salaried, healthy legit ace, what the White Sox have done to build around him has failed.

Note: A big thanks goes out to @ckamka and @ScottLindholm for their help and expertise. Matt Spiegel is a host on the Spiegel and Goff Show on 670 The Score from 9 a.m.-1 p.m. on weekdays. Follow him on Twitter @MattSpiegel670.