Officers were out Sunday helping drivers safely access a nearby subdivision in Northbrook. Just a few blocks away, several families were still cleaning up after the intense storm.

"When I went to bed last night, I didn't think it was supposed to storm," Northbrook homeowner Sheryl Long said.

Now Long was left to deal with the damage. Workers spent hours Sunday removing flood water from her family's home.

After the intense rainfall, Long said there was at least 5 feet of water in her basement, even a few inches on the first floor of the home. 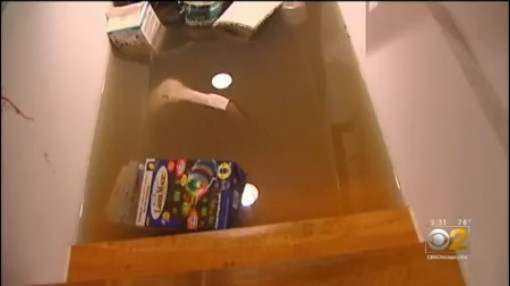 Her furnace and hot water heater are also broken.

"So we won't be staying here tonight," Long said.

A block away, another homeowner watched as water started pouring into his home.

"It felt like we were in a fishbowl," Ryan Wagman, Northbrook homeowner, said.

"I spent five, six hours this morning squeegeeing water and pushing," he said.

Wagman and his Northbrook neighbors were not the only ones affected by the severe storm.

In nearby Wheeling, a car was left abandoned, thanks to more than a foot of standing water.

Another driver in Deerfield was stuck as water surrounded their vehicle.

On the North Side of Chicago, a large tree limb fell and landed on top of a car and blocking the street.

Through it all, Wagman remembers this one, simple fact.

Unfortunately, the homeowners told CBS 2 flooding of this kind is becoming more common to them.

The Long family said they were still cleaning up after severe flooding from 2011 when all this happened.