CHICAGO (STMW) -- Heavy rains have caused major flooding across much of the Chicago area overnight, especially in the southwest suburbs, where at least two school districts were forced to cancel classes at all its schools.

According to the National Weather Service, more than 6.1 inches of rain were recorded by a cooperative observer near Midway International Airport from Thursday night until 10 a.m. Friday; with most of that rain -- 3.6 inches -- falling in a 40 minute span starting shortly after 2 a.m.

Nearby suburban Bedford Park saw 4.6 inches by 6 a.m. Oak Lawn and neighboring Chicago Ridge received more than 5 inches by 10 a.m. Many other southern and western suburbs were hit by 3 to 5 inches of rain.

Southwest suburban Burbank was one of the hardest hit by the storm, with many homes completely surrounded by flooding, their yards and streets completely covered with water.

CBS 2's Susanna Song reports a Cadillac SUV that tried to drive through flooding at 79th Street and Melvina Avenue in Burbank ended up stalling, and the driver was forced to wait for a tow truck to get his car out.

Water was up to two feet high in parts of Burbank, covering many residents' yards.

It was the second time in three weeks that area has flooded.

While the water was starting to recede Friday morning, stress was only rising for homeowners like Malgorzata Pawlikoski, who were left with flooded basements.

Pawlikoski said she woke up in the middle of the night to check the basement, because it flooded three weeks ago. It happened again early Friday

"The basement was flooded all the way," she said.

Rain came gushing out of the drains and toilets in the bathroom when the sewer system backed up, overwhelmed by the early morning deluge. After being hit with a double whammy of flooding this month, Pawlikoski was rethinking her plans to refinish the basement. However, without it, her family would lose out on a family room and two bedrooms.

"It's sad to have lost everything that you have," she said.

After the first flood three weeks ago, the insurance company estimated $10,000 in costs for repairs and replaced furniture. The family was contemplating if they should move out.

Down the street, cars were stuck in standing water up to the tops of their wheels. A white SUV stalled in the middle of the street. The owners took off their shoes, and treaded through the water to find help.

Sandra Narkute didn't want to chance the drive, so she said she'll take the bus to get around on Friday.

Audrey Perez came out to check on her two cars to make sure they were still parked, and not floating down Melvina.

"This is one of the worst situations where we've been flooded by rains. You can see my dog here, a Great Dane, he's up to his knees as well," she said. "It's a challenge for a lot of people … in their residences, as well as this morning's commute. A lot of people won't be able to get to work, and transportation is critical." 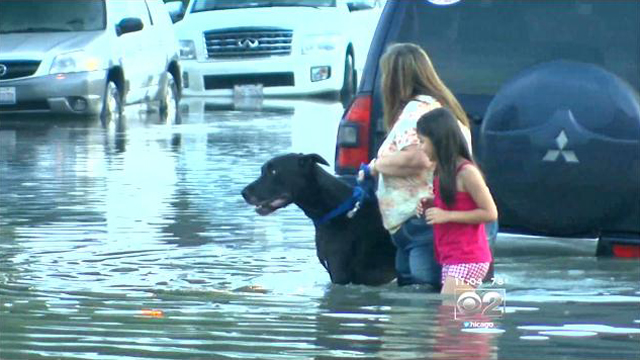 A family walks their Great Dane down a flooded street in southwest suburban Burbank on Friday. (Credit Susanna Song/CBS)

Streets also flooded in neighboring Oak Lawn, where streets just south of 87th street were just as bad as in Burbank. Residents said they don't remember flooding this bad,

"87th Street, always, the retention pond overflows, and 87th is blocked; but it's never come two blocks this far into Oak Lawn," one woman said.

One man riding a bicycle down a flooded street said it's the only way he can get around.

Homeowners said they haven't seen flooding so severe since the 1970s, when news reporters had to use row boats to get around.

"You can't walk down here at all, and I'm not going to walk through this," one woman said.

Earlier in the day, flooding forced state officials to shut down part of the Eisenhower Expressway. At about 4 a.m., the inbound Eisenhower was closed at 1st Avenue in Maywood, and the outbound lanes were closed at Harlem, because of flooding in between those two locations. All but one lane reopened by 6 a.m.

The CTA also suspended service on the Forest Park branch of the Blue Line between Forest Park and Harlem around 4 a.m. due to that flooding. Trains began running again shortly after 5 a.m.

Flooding also caused significant delays for nine Pace bus routes, as drivers were unable to reach the Bridgeview garage. The bus routes, scheduled to start as early as 4:30 a.m., were delayed at least an hour. Conditions improved by 5:30 a.m., and the buses began running, but Pace officials said delays were expected to continue through the morning on at least seven routes.
Many viaducts across the city and suburbs were left filled with standing water. For instance, 3 feet of standing water flooded viaducts at 79th and Kedzie.

Sam Abraham, who works for a used car dealership, was driving a dealer car Friday morning, so he knew he had a lot of explaining to do after the car ended up flooded in the viaduct.

Abraham was driving a Chevy Monte Carlo to work when the wake from passing semi-trailer trucks lifted the car off its wheels, and the Monte Carlo floated into the 79th Street viaduct.

"I don't think my boss … he's not going to be very happy when he see his car flooded," he said.

The water came up to the middle of his chest, leaving the seats soaking wet.

Even a Chicago fire truck stalled in the Kedzie Avenue viaduct, after almost making it through the high water. It had to be towed out by a heavy duty wrecker.

In the Ashburn neighborhood on the far Southwest Side, at least one resident reported having three feet of water in their basement, after water backed up from their toilets and drains.

Though skies cleared for the most part by about 5 a.m., more rain was possible later Friday, and again Saturday.