CHICAGO (CBS) -- A postal worker is in the hospital with a long recovery ahead, but his father is out thanking the woman who helped save his son's life minutes after he'd been shot by a convicted felon. 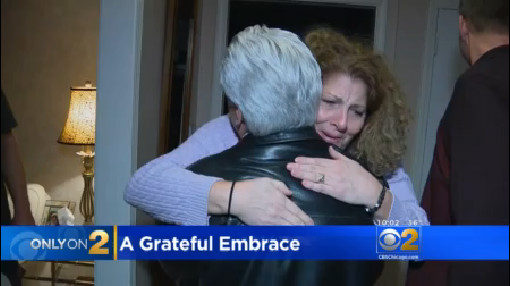 "Thank goodness they were around," Casazza said. "Because they saved my son's life, no doubt about it."

"I grabbed his hand and was just talking with him," Maria Pignato said. "There was a lot of blood. It was very traumatic."

Monday Pignato's husband called 911. She and others comforted and waited for help after 36-year-old Stephen Casazza, Jr. was shot three times while in an unmarked vehicle for the United States Postal Service making holiday deliveries.

They still have no clue why Casazza was targeted.

The accused gunman is 24-year-old Cameron Ruebusch, who was arrested Wednesday.

No one was at his listed address when CBS 2 reached out for comment on his court history, which includes a felony drug charge and accusations of having a firearm without a valid FOID card.

According to the Cook County State's Attorney, the gun charge was dropped and in October of 2018. He was sentenced to 24 months of probation, meaning he served less than three months of that before the shooting scene in Elk Grove Village.

As for if the 24-year-old's sentence was too lenient and who owned gun in the crime, the state's attorney said contact the U.S. Attorney.

"It's ridiculous. What does it say about the court system in Cook County? Well, I don't know," Casazza said.

What is clear is one family is grateful to another for being there in a time of crisis.

"They did a great thing. They got involved," Casazza said.

There's no word on when Casazza, Jr. will leave the hospital.

Ruebusch is facing federal charges. That could mean 20 years in prison.

Casazza's family and friends have created a GoFundMe page on his behalf.