(CBS) Over the past few weeks, we've taken a look at some of the core passing concepts that Marc Trestman used to move the ball through the air. This week, we'll take a look at one of his favorite concepts to put the ball in the end zone.

Moving the ball in between the 20s is nice, but in the end all that matters is points, specifically touchdowns. A big reason the Bears offense took the leap it did in points scored can be attributed its increased efficiency in scoring touchdowns in the red zone. Their mark of 58.3 percent was the seventh-best in the league, up from 24th (50 percent) in 2012.

The Bears deployed a variety of schemes in the red zone – packaged plays, screens, nod routes, rub routes – but one of their favorites was the tried-and-true "smash" route.

The smash route is one of the most basic-yet-successful passing concepts in the playbook. It's a two-man route combination of a smash – hitch or quick in – by the outside receiver (No. 1) and a corner route by the inside receiver (No. 2) that works against virtually any coverage.

Against man, the smash route keeps the outside defender shallow, while the corner route gets the inside receiver away from coverage and gives the quarterback a throwing window.

Trestman's wrinkle with the smash route is he often runs it from a trips formation. This is unique, as offenses typically want to run the smash against Cover-2 zone to high/low the cornerback, but defenses avoid playing zone against trips.

By going to trips, Trestman forces man coverage and gets his inside receivers matched up against an opponent's sub corner or safety, as defenses usually reserve their best cornerbacks for the outside receivers. When you have weapons as potent as the Bears do on offense, it's all about matchups.

The first example comes from the Bears-Steelers game last season. Leading 27-23 late in the fourth quarter, the Bears have the ball facing third-and-5 at the Steelers' 17-yard line.

The Bears come out in 11 personnel in a trips formation, with Brandon Marshall as the No. 1, Earl Bennett as the No. 2 and Alshon Jeffery as the No. 3.

The Steelers respond with dime (six defensive backs) personnel in a 2-3-6 alignment with a single-high safety. 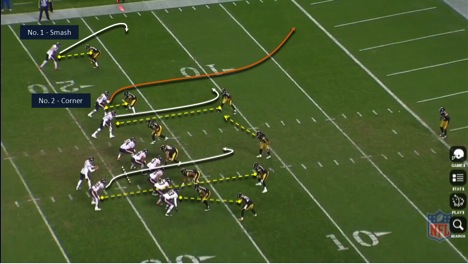 Trestman gets exactly what he was hoping for, as the Steelers match up rookie safety Shamarko Thomas over Bennett. Thomas misses on his attempt to jam Bennett at the line of scrimmage. On the outside, Marshall keeps Ike Taylor shallow with the smash, leaving Bennett and Jay Cutler a big window to work the corner route. 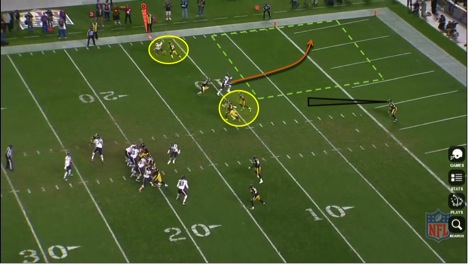 Given that Clark's responsibility is to drive downhill on any inside breaking route, he's not able to help on the corner route. Cutler drops the ball in the bucket, while Bennett makes an excellent catch and keeps both feet in bounds for the game-sealing touchdown. 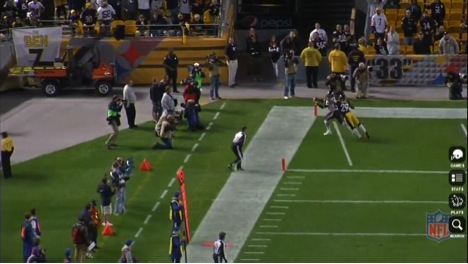 The next example comes from the Bears-Packers game in Green Bay last season. The Bears are just outside the red zone, facing a 3-and-6 from the Packers 23-yard line.

The Bears come out in 11 personnel in a 3-by-1 alignment with trips to the right, Jeffery as the No. 1, Marshall as the No. 2 and Martellus Bennett as the No. 3. 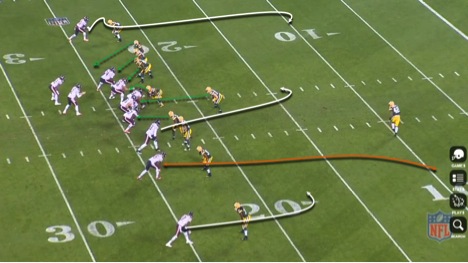 The Packers respond with dime personnel in a 1-4-6 alignment and are showing an overload blitz to the offense's left.

The Packers send six and drop five in Cover-1 man-free coverage. As I mentioned last week, Trestman is a protect-first play caller, so running back Matt Forte is kept in to make the protection count match.

Right tackle Jordan Mills gives up ground, and quarterback Josh McCown is quickly under duress. However, Trestman created a one-on-one with the inside receiver (Marshall) on the corner route, and a small throwing window appears. 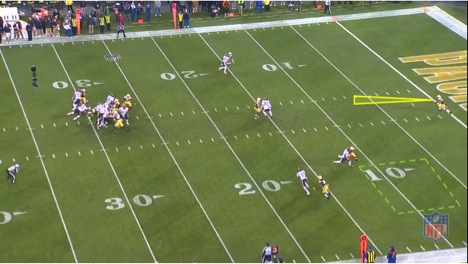 McCown steps up in the collapsing pocket and is able to get the ball to the front plyon, where Marshall makes an acrobatic catch for a touchdown. 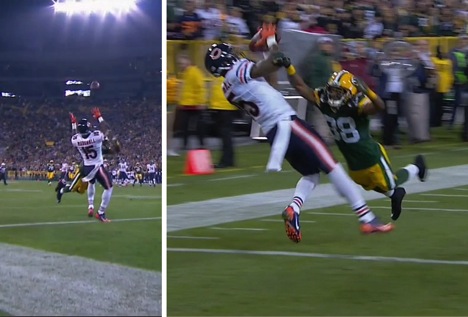 Of all the concepts we've analyzed, none of them are novel to Trestman. They're executed league-wide every weekend. The genius in Trestman lies in the formation nuances and alignment subtleties that he deploys.

With an offseason to do some self-scouting and install new concepts and variations to the base package, the future is very bright for the Bears offense.