(CBS) Did you know that four of the six teams who ran more than they passed last season made the playoffs? Undoubtedly, the NFL is a passing league, but running the ball is far from passé.

Zone blocking is a technique where offensive lineman block areas of the field opposed to specific defenders. There are a couple precepts that govern the decision making of a lineman on a zone blocked play, specifically: which way is the play designed to go ("playside"), and am I "covered" by a defender on the line of scrimmage? Linemen who don't have a defender covering them are considered "uncovered" and are doing the "zoning" on the play.

To make things clearer, let's go to the film room and take a look at an inside zone play run by the Houston Texans out of "12" personnel (1 Running Back, 2 Tight Ends). 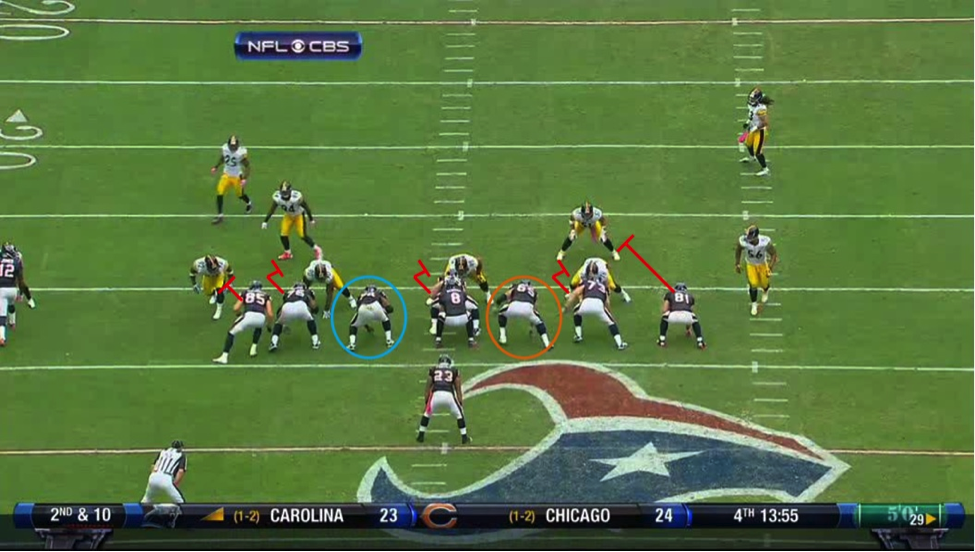 For the uncovered playside guard, his playside teammate (the left tackle) is covered by a defensive end shaded to the inside in a 4i-technique, so there's a strong chance the playside guard ends up blocking him. For the uncovered backside guard, his playside teammate (the center) is covered by a nose tackle lined head up in a 0-technique, so there's a 50/50 chance the backside guard ends up blocking him.

The offensive line double teams to the playside of the line of scrimmage, and lets the defender's leverage determine how the blocking unfolds. In this example, the 4i-technique steps inside, so the playside guard positions his helmet on the outside number of the defender's jersey, and the playside tackle (#76) releases to the linebacker. The center and backside guard "combo" block the nose tackle.

Arian Foster's aiming point is the playside guard's outside hip, or the "B-gap." In a zone scheme, running backs are taught to "press" the line of scrimmage and read the helmet of the second defender on the playside. 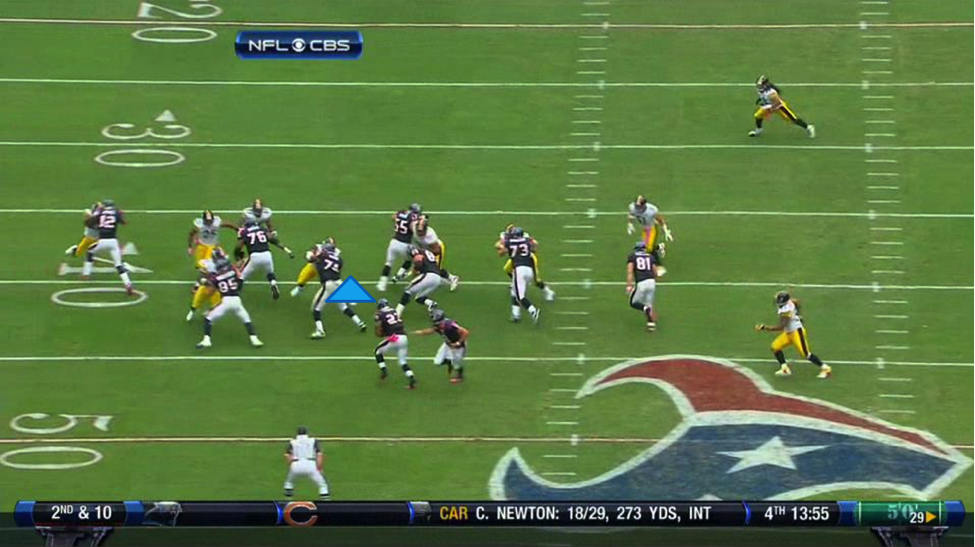 Since the playside running lanes are defended, Foster makes one decisive cut to the backside alley. The backside outside linebacker is playing contain in case of a bootleg, so once the backside tight end seals off the inside backer (#9 of the 11 Steelers defenders), Foster only has the safety left to beat. 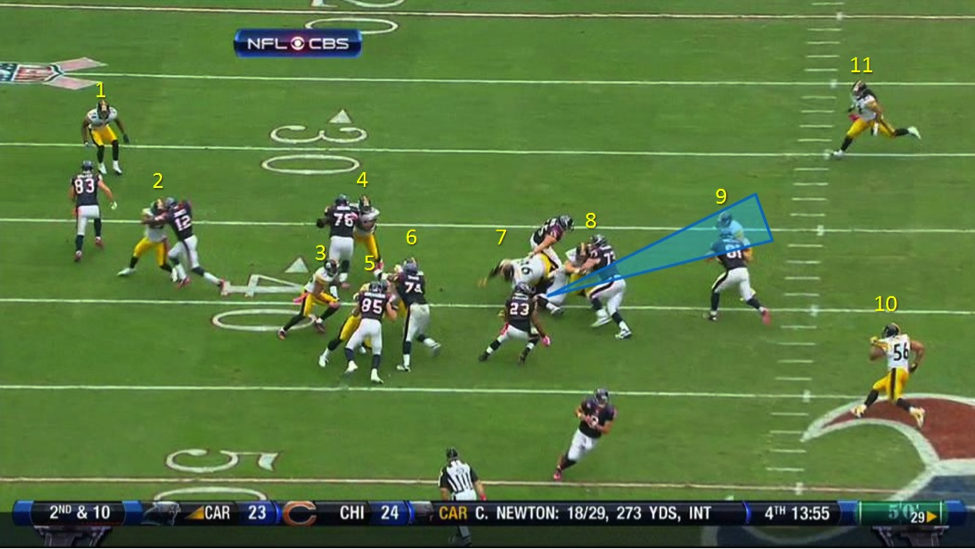 Troy Polamalu overpursues with his angle, so it's off to the races for Foster on a 46-yard touchdown.

Let's take a look at an outside zone play run by the Texans. On an outside zone play, the same blocking principles apply, but the line takes a wider first step, and the running back's aiming point is a wider gap, on this play, it is the outside hip of the playside tackle or the "C-gap." 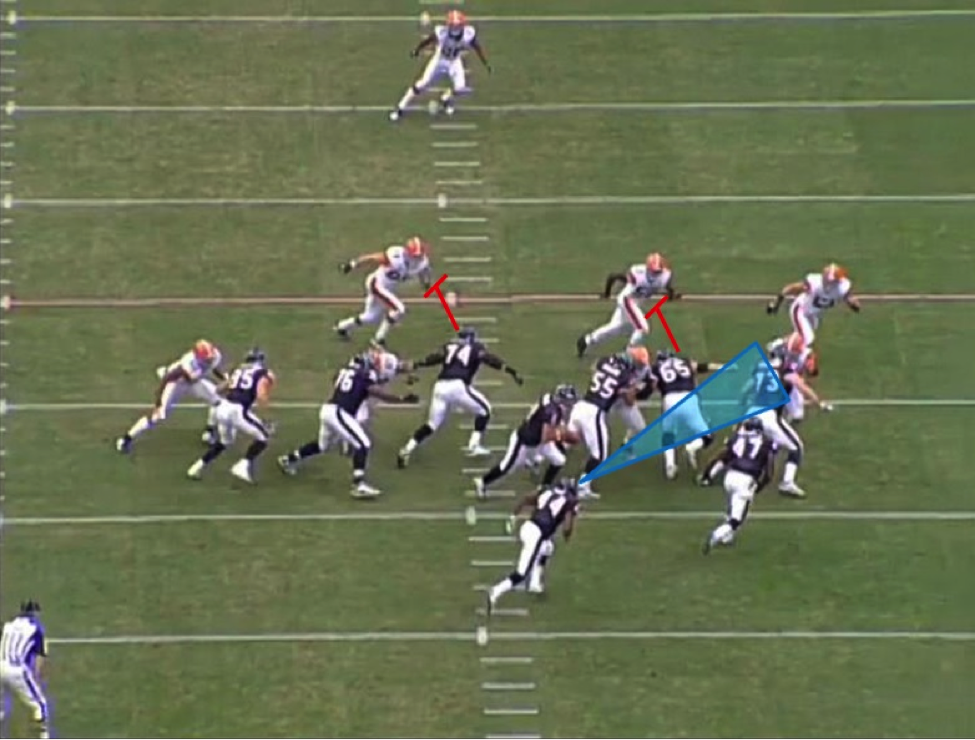 The Browns set the edge to the outside using a "force" defender, forcing Ben Tate to follow his fullback on an inside cut. 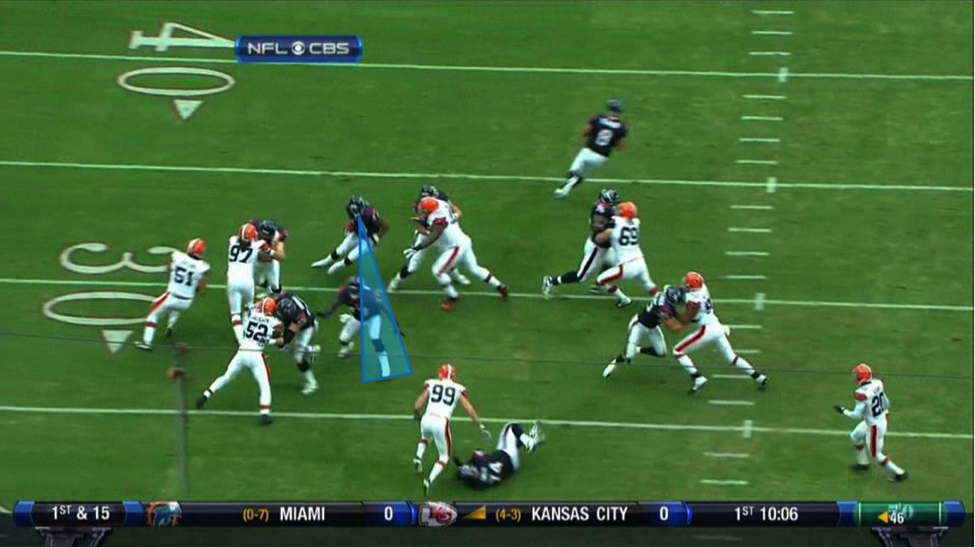 The fullback seals off the remaining Browns defender (#99) and picks up the pursuing backside safety in the process, and Tate finds his way into the end zone. 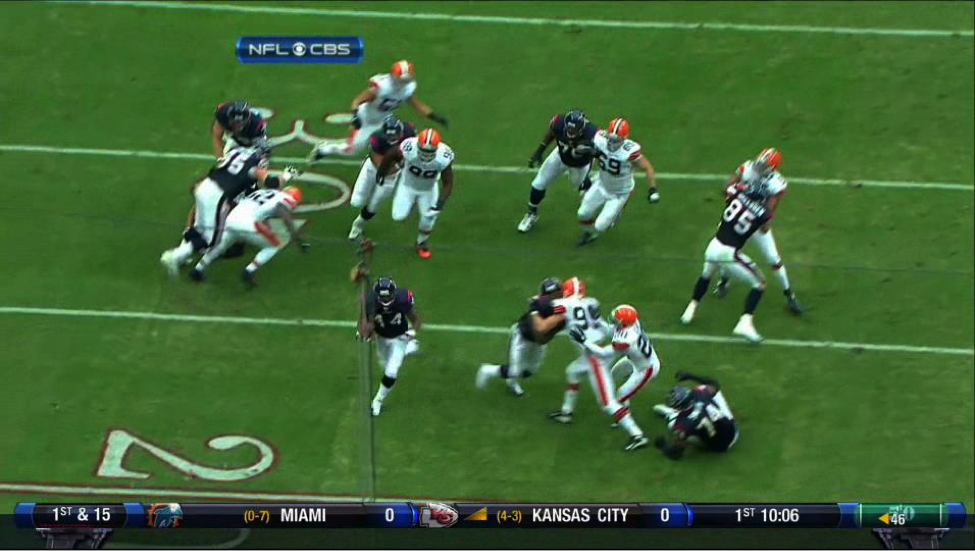 You can train your eye to determine if a play is zone blocked or not by paying attention to two areas of the offensive line and running back's body: their feet and shoulders. Their first step - or "lead" step - is a short step at a 45-degree angle to the playside; this aligns their hips and shoulders. This picture is a great illustration of a line and running back working in concert off the snap of the ball. 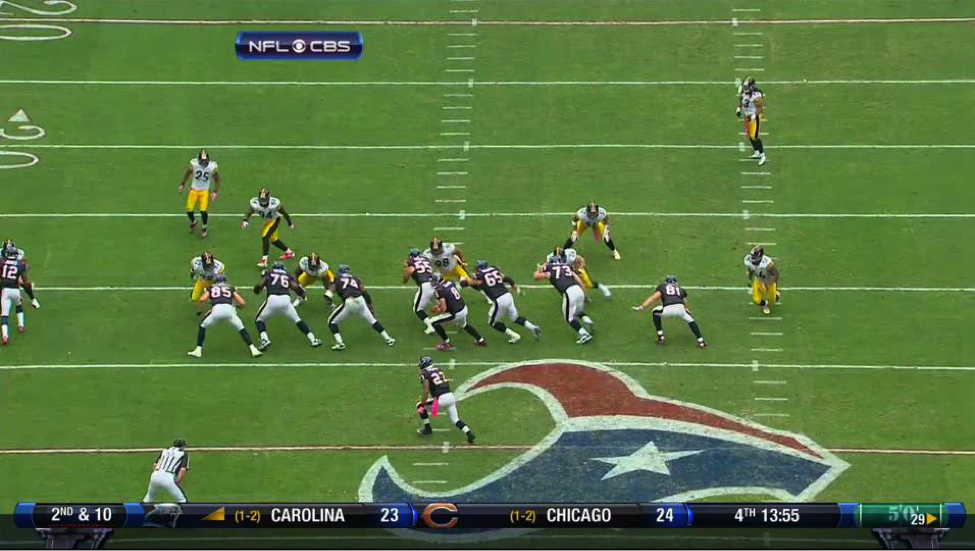 Now, let's take a look at a man blocking scheme run by the Minnesota Vikings. Man blocking is exactly what it sounds like, matching up a "hat on a hat" and creating one point of attack for the running back to hit full speed "downhill." There's no better downhill runner in the league than Adrian Peterson, and when he's given a clear path to run through, bad things happen to the defense. 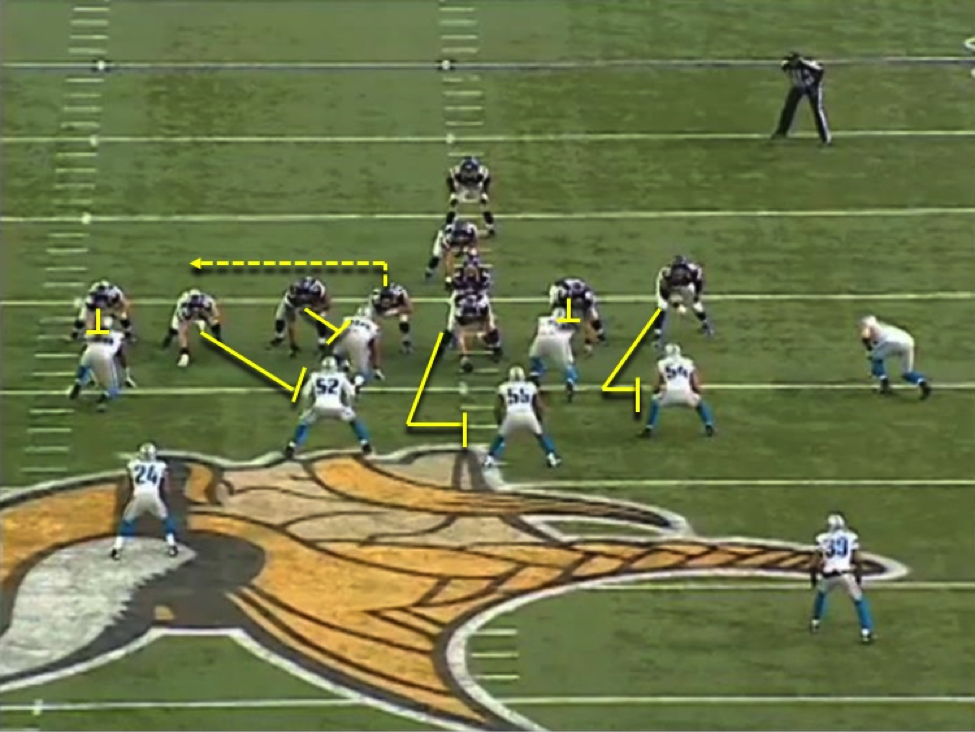 The Vikings win every block at the first and second level, leaving the safety as the last line of defense. With his fullback leading the way, Peterson reads the block and bounces it to the outside for a 64-yard touchdown run. 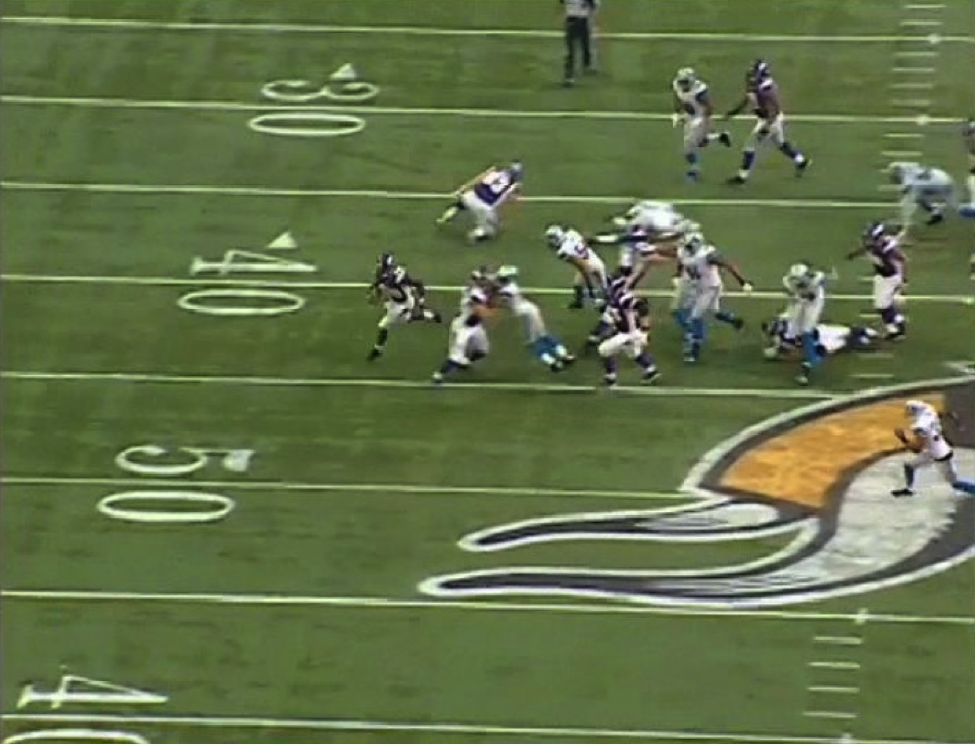 Man plays utilize power and the snap count to fire off the ball. Offensive coordinators look for tendencies to see what type of defensive front they'll get in certain formations. When they scheme it right and are able to outnumber and/or outflank the defense to one side of the field, good things happen.

Zone blocking has become more prevalent, as it's a challenge to find offensive line personnel capable of lining up and moving 325+ pound men out of an area. Zone plays create lateral "flow" by the defense. A defender's natural instinct is to pursue the ball and not penetrate up field, which is what the offense needs to seal off blocks, and create both playside and backside running lanes.

Zone or man, it's all about execution.

Questions about this playbook, or suggestions for a future playbook? Follow/Tweet me: @djdurkin