CHICAGO (CBS) -- Disturbing video showing a Chicago Police officer slamming a man into the pavement went viral last week and continues to be the subject of an independent investigation by the Civilian Office of Police Accountability (COPA).

At COPA's request, the police department agreed to strip the officer, Jerald Williams, of his police powers during its investigation.

And while Williams can be seen on cell phone video lifting a man off his feet and slamming him to the ground, CBS 2 Investigators found he is a trained mixed martial arts fighter, and videos on Youtube show him using similar maneuvers in the ring. 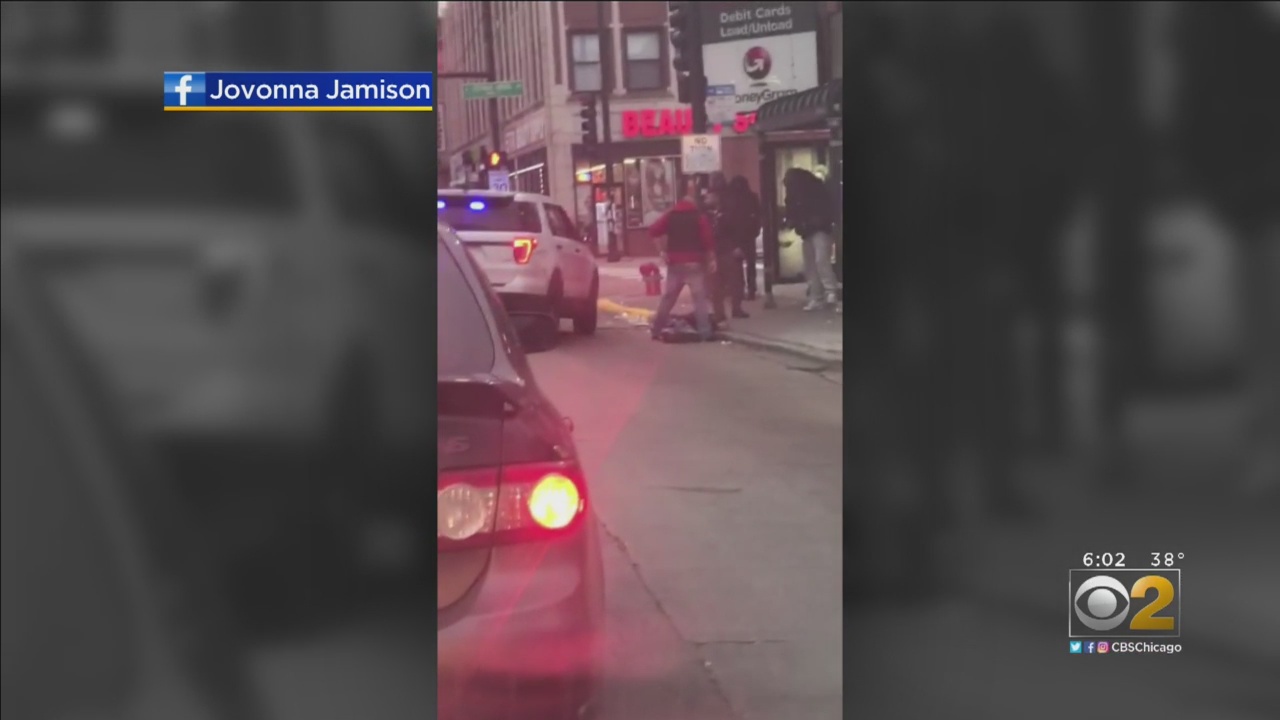 Williams slammed 29-year-old Bernard Kersh in the 700 block of East 79th Street around 4 p.m. on Thanksgiving. The video shows the man's head slamming against the curb, and he doesn't move for the rest of the 40-second video.

Police said officers stopped Kersh to give him a ticket when they saw him drinking alcohol in plain view at a bus stop. That's when they said he resisted arrest, and spat at and licked an officer's face.

The police department called the incident an "emergency takedown."

Kersh was charged with one felony count of aggravated battery, one misdemeanor account of resisting police and one misdemeanor count of simple assault. He was also cited for drinking alcohol in public. He was taken to the University of Chicago medical Center.

Stroth also said he believes Williams used his MMA skills as a "lethal weapon" when he slammed Kersh to the ground.

"I think that the officer – I think he went about handling my son the wrong way," Johnson said. "…He could have killed him. That was a really hard blow to the head. I think that the police needs to find other ways of handling people, other than what he did."

Officers are supposed to follow specialized non-violent crisis intervention training to deal with people battling mental health issues. It went into effect after the death of Philip Coleman in 2012.

Kersh's family and their attorney said they believe Williams should have followed this training in the incident with Kersh.

This isn't the first time Williams was accused of misconduct.

He was also the lead officer who got a search warrant for the wrong home in February after gathering incorrect information from a confidential informant. It ultimately led to Williams and 16 other officers raiding a child's birthday party, pointing guns at an innocent family and leaving children traumatized at the wrong home. Williams, along with the City of Chicago and four other officers, are named as co-defendants on the family's federal civil rights lawsuit.

At the time Williams obtained the search warrant, he was part of the police department's Area South gang enforcement unit and had been an officer with Chicago Police for more than five years, the warrant said. Records show police sought a 46-year-old male target and drugs, including Ecstasy, after Williams met with a confidential informant, who is referred to as "J. Doe" in the complaint for search warrant.

J. Doe told Williams they recently purchased drugs from the target. The warrant documents don't show police did any additional research to confirm whether the transactions actually happened at the house, or if the target really lived there. CBS 2 Investigators uncovered he hadn't lived in the building for at least four years.

Despite this, officers burst into the home using a battering ram while the family was in the midst of celebrating 4-year-old TJ's birthday party. The family said police ransacked their home and TJ's birthday cake was left on the floor.

"I thought they were going to shoot me, my brother and everybody else," said TJ's 7-year-old sister Samari.

TJ's mother, Stephanie Bures, said her son now shows signs of emotional trauma and has trouble sleeping. Kiqiana Jackson, another relative who was at the home at the time of raid, said police "mandhandled" and handcuffed her when she asked officers why they were in the house and to show her the search warrant.

"They attempted to put me in handcuffs, but I grabbed the kids [and said], 'Why are you arresting me? What are you doing?'," Jackson said. "And the kids are screaming. And I'm telling them, it's OK. But they're still grabbing me trying to pry my arms off of the kids"

This family is one of more than a dozen CBS 2 interviewed as part of its ongoing investigation into how Chicago Police officers have raided the wrong homes and traumatized innocent families. This was the subject of a half-hour CBS 2 documentary, [un]warranted, told through the voices of impacted families and children.

Nearly 10 months after the birthday raid, Williams was captured on cell phone video slamming Kersh to the ground.

The Rev. Jesse L. Jackson attended Kersh's bond hearing at the Leighton Criminal Courthouse Sunday and said he believes "it was a case of excessive force."

The consent decree mandating Chicago Police reports contains only one reference to "take-down techniques." The policy notes only that an officer should not use a chokehold in doing so. Officers can't use force if a suspect is "insulting an officer." But it doesn't talk about spitting or licking the officer.

"He was thrown to the sidewalk," Rev. Jackson said. "He cracked his head, perhaps has a concussion because his head still hurts.

"He needs mental care. But the police had no basis for throwing him down in a way that could have killed him," Jackson continued. "We've seen this before, and it must stop. I hope that the mayor and those involved will move immediately to deal with this police officer and those who stayed silent and did nothing."

After the incident Mayor Lori Lightfoot tweeted that while the video doesn't show the entire incident, she found it "very disturbing."

The Chicago Fraternal Order of Police (FOP) said Williams was in danger and had to take action.

"Tried to de-escalate, the guy was out of control, he was threatening him, and he did a takedown," said FOP Second Vice President Martin Preib.

On Tuesday, a second officer was relieved of police duties in connection with the incident at COPA's request, while it continues to investigate.

"It's a big decision," interim Police Supt. Charlie Beck told CBS 2. "You change an officer's life when you do this, but the circumstances warranted the decision."

A Chicago Police Department official said Officer Williams would not be available for interview.