CHICAGO (CBS) -- Despite months of public promises to resolve the case of an innocent social worker who was wrongly raided by the Chicago Police, her attorney said the City has yet to make a settlement offer and is delaying what could bring some closure to the incident that sparked national outcry.

In December of 2020, CBS 2 aired the damning body camera video that revealed the moments officers wrongly raided Anjanette Young's home, pointed guns at and handcuffed her. Young was undressing for bed and unclothed when officers burst in.

While the botched raid happened in February of 2019, prior to when Mayor Lori Lightfoot took office, the video was unearthed while she was mayor. It wasn't until the airing of the video more than a year later that Lightfoot promised to take steps to resolve the case.

"What I've directed my law department to do is, with respect to this one, if there is a pending case, get that case resolved," Lightfoot said on Dec. 15, one day after CBS 2 aired the video.

On Dec. 16, Lightfoot publicly apologized to Young at a news conference.

"Knowing that my words will not change what happened to you and your family almost two years ago, I nonetheless say, I am sorry," Lightfoot said.

The City's top attorney, Mark Flessner, resigned amid public scrutiny. The video itself, along with the City's legal attempts to stop CBS 2 from airing it, spurred months of backlash against city leaders.

But months later, Young and her attorney, Keenan Saulter, said public statements made by Lightfoot and her law department contradict what's happened behind closed doors since then.

"As we sit here today, the City has offered Ms. Young zero dollars to resolve this case, still," Saulter said.

Young likened the city's handling of the case to how officers treated her the night of the raid. As she stood undressed and handcuffed, she told officers dozens of times they were in the wrong home, body camera video shows.

"One of the key things for me that night, and what I feel like continues to happen, is being invisible," Young said. "I made several requests while I was in handcuffs, and no one responded to me. And it made me feel like I was invisible to the group of men who were in my home.

"I feel like I'm invisible to the Mayor and the city," Young continued. "They continue to not see me, as anyone who deserves to be treated fairly, to receive justice, to be heard."

Young said she was hopeful in December after she met with Lightfoot privately at her church.

"[Lightfoot] said a lot of things that, in my opinion, at the time sounded good. Things that I wanted to hear. Since that time, she has not done any of those things, and so I've really come to the conclusion that meeting was perfunctory," Young said. "…It angers me that she put all of that effort into those gestures and has done absolutely the opposite of all of these things."

CBS 2 obtained some emails detailing communications between the City's law department and Saulter regarding Young's case. The emails reveal for the first time how the city responded after Saulter made his first settlement offer in March of 2020. This was after Young initially filed her lawsuit in federal court and before the body camera video was made public.

On March 16, 2020, Saulter emailed a settlement demand to multiple members of the City's counsel, including Assistant Corporation Counsel Kyle Rockershousen.

On April 2, 2020, Rockershousen replied that the City would not offer Young any money to resolve her case.

"In response to your demand of [redacted], Defendants offer $0 to resolve this matter," Rockershousen wrote.

At that time, city and police officials, as well as Lightfoot, knew about the body camera video and what it showed, according to internal emails previously released by the city.

"[Anjanette was] handcuffed, completely humiliated and embarrassed, scarred for life, and they said that's worth zero dollars," Saulter said. "To offer zero, that's purposeful. That's sending Ms. Young a message. That's telling her that her pain is actually worthless."

After CBS 2 aired the video in December of 2020, the City and its legal department repeatedly committed to resolving the case, through both litigation and proposed policy reforms.

In response, the City's Acting Corporation Counsel Celia Meza did not provide an offer but said the City and Lightfoot "wish to resolve this matter as promptly and judiciously as possible." Meza also requested that Saulter provide all non-monetary demands, and asked Saulter and Young to consider mediation. The City also offered to pay all associated costs and fees for the mediation.

"In order to properly account for any reforms requested that may have a monetary cost before implementation," Meza said, "I ask that you submit these additional demands."

Meza added, "I make this request on behalf of the City and Mayor Lightfoot in good faith and ask for your serious consideration."

On Feb. 19, Saulter re-filed Young's lawsuit in state court. On Feb. 22, Meza asked in an email a second time for a "complete demand" from Saulter, to which Saulter replied he would only agree to mediation after the City provided an offer.

"If we do not have a response (a monetary offer) we will assume that the City does in fact not intend to negotiate this matter in good faith (even though the Mayor indicated that she had a desire to resolve this matter back in December of 2020)," Saulter wrote on Feb. 23, adding he would only agree to mediation after the City "provided a monetary response to our demand." 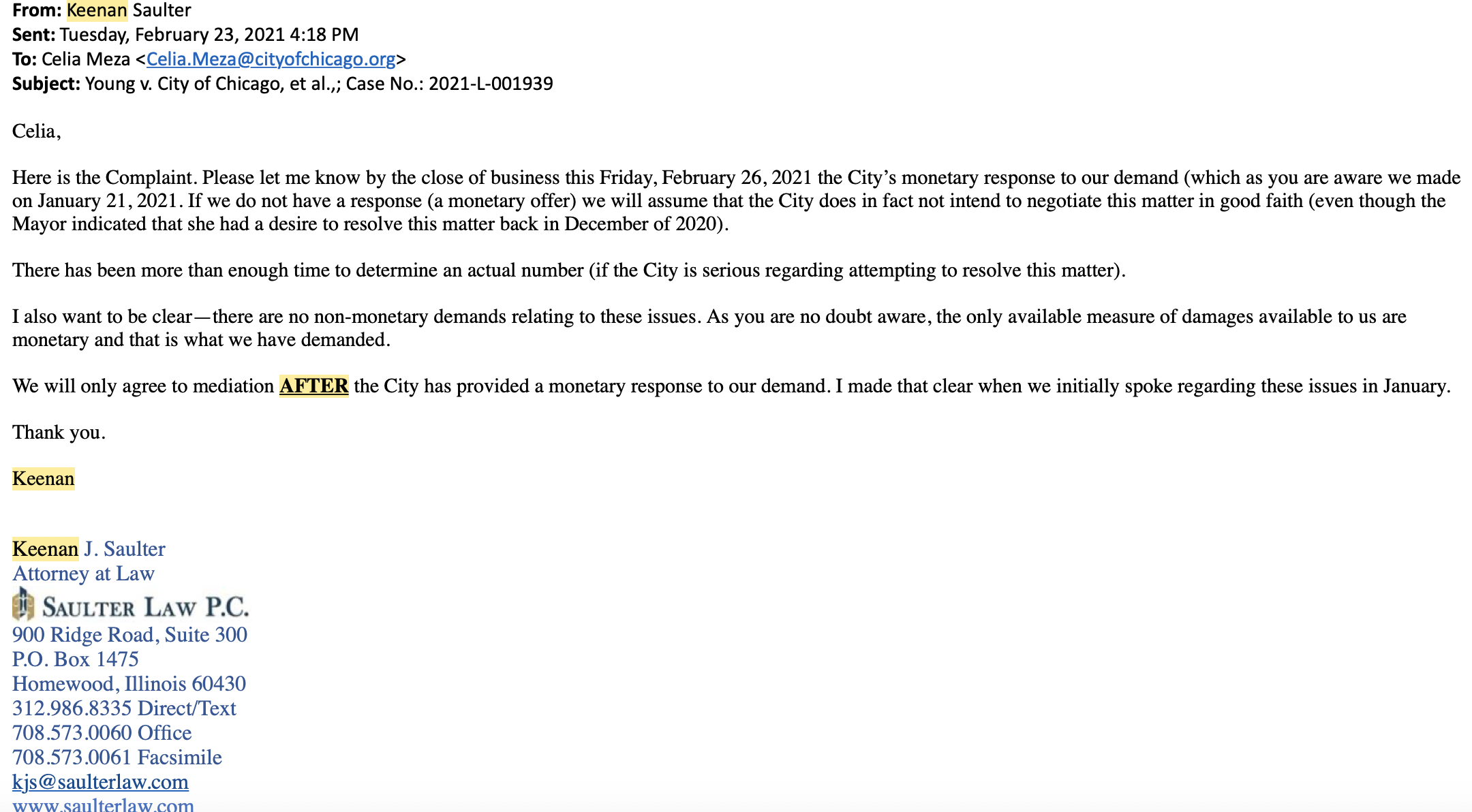 "Quite frankly, they don't have any credibility with us anymore," Saulter said in an interview. "So I'm not going to walk into a mediation with whatever we've demanded, they've offered nothing and we waste our time."

The emails show Saulter made another offer to the City and requested the City make a counter-offer on March 18.

"It would give me an opportunity to move forth in my healing without having to continue to deal with the piece of fighting for it," Young said. "I would like to be able to put [it] behind me, that there was some justice."

A statement from the City's law department said Lightfoot "remains committed to continuing to address the actions surrounding any litigation in this matter to an equitable and expeditious resolution so that Ms. Young can continue her process of healing and move forward. The City has made clear to Attorney Saulter that it has no intentions of negotiating this matter in the press as it does a disservice to everyone involved.

"Weeks ago, the City provided Mr. Saulter with a fair and just pathway to resolution," the statement continued. "The City asked that Mediation be considered and offered to pay all associated costs and fees. Mr. Saulter stated he would not agree to Mediation absent conditions."

In its statement, the City also emphasized it was served with the refiled lawsuit on March 19 and all officers involved in the raid have not yet been served.

"It remains the City's full intention to resolve this matter in a way that is fair and just and helps repair the harm done to Ms. Young and to the community at large," the statement said. "The City will not litigate this matter in the press. To do so would be wholly unproductive."

Young said, to her, the issue is more than a settlement with the City.

"For me, the bigger issue is policy change and culture change," she said.

Young is one of dozens of innocent people CBS 2 uncovered were wrongly raided by the Chicago Police as part of a years-long investigation. Every one of those families, like Young, are suing or have previously settled with the city.

As a result, members of City Council introduced the "Anjanette Young Ordinance" in February to push for stricter search warrant reforms and accountability for officers who raid the wrong homes and violate department policies.

"The mayor's made a lot of statements publicly about her intentions," Young said. "She often uses the words accountability and transparent, but I would like to say that those things aren't happening. The mayor's lack of response to me just continues to cause me hurt and trauma."

As Saulter and Young continue to litigate the case – two years after officers wrongly raided her home – Young said she is committed to pushing for systemic reforms.

"This is more than the city paying me a dollar amount to make this go away. I want to make sure this never happens again," Young said. "They – the City, the world – will hear more from Anjanette Young even when we close this chapter with the City of Chicago."