BOSTON (CBS) - It's the question that we receive more than any other in the weather office this time of year.

We certainly wish there was an easy answer, a way to prepare everyone for what was ahead.  If only it were as easy as the Farmer's Almanac makes it seem.

For instance here is their forecast:

We predict that real winter weather will return to areas from the Great Lakes into the Northeast. We are "red flagging" February 12–15 and March 20–23 for major coastal storms along the Atlantic seaboard; storms bringing strong winds and heavy precipitation.

So there you go, done.

"Real" winter will return and we will have some big storms on February 12th and March 20th.  Thanks, have a nice winter.

What?  That isn't good enough?

It seems these days, every major weather media operation has a winter forecast, from The National Weather Service to your local TV station.

I am sure that by now you have come across several predictions for the upcoming winter.

Now it's our turn.

And our forecast will be complete with all the standard "ifs" "ands" and "buts" that all the others have, BUT we like to think that our forecast has an excellent chance of being accurate IF the atmosphere cooperates AND unfolds as we think it might.

Predicting the weather for an entire season is very much different from predicting it over the next 7 days.

When we do a 7-day forecast we are looking, for the most part, at things that already exist on a weather map and attempting to forecast how they will all interact over the coming days.

A long-range, seasonal forecast is an entirely different animal.

You have to look more globally and at the trends of the larger scale features like the oceans, Arctic ice melt and even 93 million miles away to our sun (the amount of solar activity, sunspots, also can play a big role in winter forecasting).

So clearly this is a task for a team of expert scientists, and we here at WBZ-TV have poured through all the data from all the experts and have come up with what we think is the most likely scenario for this winter.

First here are the main, overriding factors at play this winter.

This is a measure of the ocean waters in the southern Pacific, otherwise known as El Nino and La Nina. In strong El Nino or La Nina years, this can be the most important factor in the winter forecast. Some of our mildest winters on record have come during strong El Nino years and some of our snowiest have come during strong La Nina years, such as two years ago when Boston received more than 80 inches of snow. That La Nina has since faded and conditions in the Pacific are now considered to be neutral, otherwise known as a "La Nada" year. Experts originally thought that we may be headed for an El Nino but recent data suggests that we will hang right in the middle for a while, thus there is no strong signal from the Pacific for this winter one way or the other.

This is another critical piece to our New England winter puzzle. When the NAO is "negative" it means that there is a block in the atmosphere up near Greenland in the northern latitudes. This block serves two purposes.  First, it typically shunts the jet stream southward, allowing cold Arctic air to pour into New England.  Second, many times it causes some large dips or "troughs" to form in the jet stream, leading to large coastal storms. 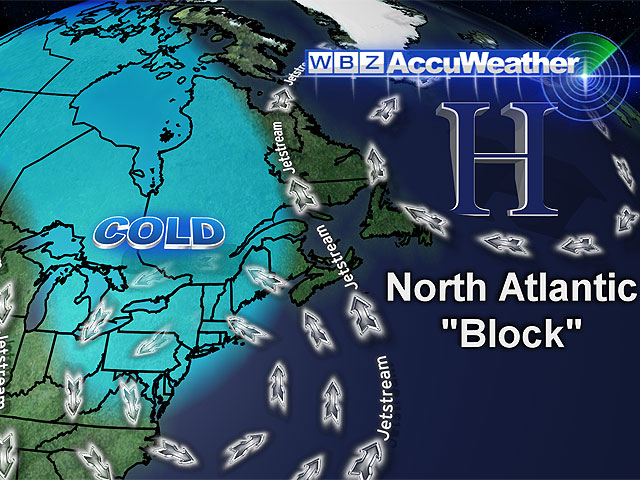 So what do you get when you combine a coastal storm with cold air? Snow!

The NAO has been trending negative over the past month or so and was a big reason why Sandy took a left hand turn into the mid-Atlantic instead of going out to sea.  The negative NAO also played a big role in the early November nor'easter as well. Most experts agree that the NAO will spend a lot more time in the negative phase this winter than positive and this may be the single most important factor this winter for New England.

There are of course several more atmospheric factors that we dissect at length in determining a winter forecast, but in the interest of not writing a novel and losing your interest (I hope I haven't already) I think I will cut to the chase.

Here are some things that we think we know about this upcoming winter.

I have heard a lot of people use this line and if we left you with just that, it would probably be the biggest cop out in history! I mean last winter's lack of snow and abundance of warmth set records, we may never see another winter like that one.

So what does this mean? For the most part we expect a fairly normal winter as far as temperatures are concerned in New England. There will be bouts of extreme cold and likely some stretches lasting several days or perhaps even weeks with temperatures below normal. This may be especially true in December and January.  There are some signs that by February the cold may ease to some extent.

Boston averages about 43.8 inches of snow in a given winter season. If you have lived here for any length of time you know that we can experience wide swings in the snow department.

Just look at the last two years.  Last year's total was 9.3 inches, two years ago Boston had 80.1 inches, a difference of about six feet! 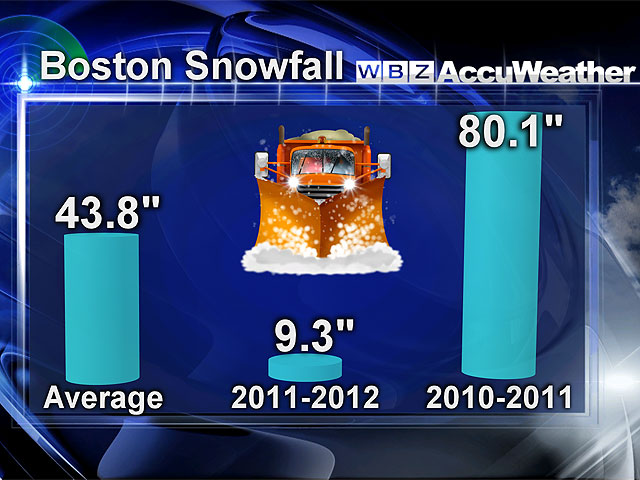 A lot of this can also come down to luck.  One major nor'easter can drop more than 20 inches of snow.  Many times the difference between a hit or a near miss from one of these storms can be just a few miles. So if you get just the right setup for a couple of these storms, the snow can add up real quickly.

Right now our best, educated guess at a final snow total for Boston this winter is between 45-and-60 inches. As usual , we expect lowest amounts down in southeastern Massachusetts and across Cape Cod, between 25-and-40 inches down there. 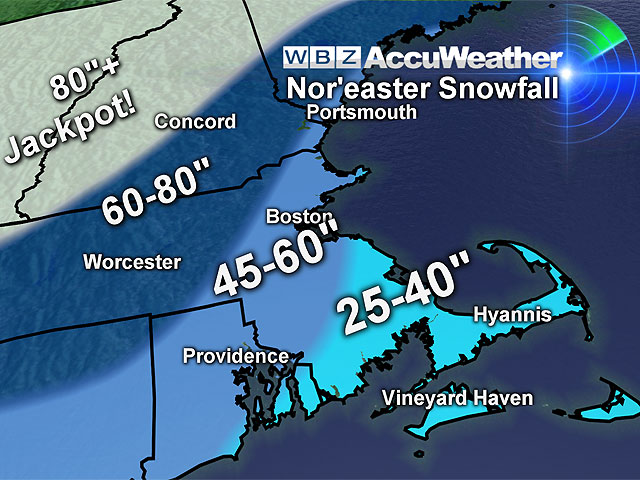 Snow amounts will ramp up quickly to the north and west of Boston.  60-to-80 inches is likely in the Worcester area and the jackpot will be at the ski resorts with more than 80 inches this season!

This was highlighted in a recent article from AccuWeather:

Above-normal snow is forecast for the I-95 cities, including Boston, New York City, Philadelphia and Washington, D.C., this winter with an active coastal storm track expected.

"[Sandy] gave us an idea of what can happen off the East Coast if we get phasing to take place," AccuWeather Lead Long-Range Forecaster Paul Pastelok explained. "And we also saw a couple storms, not as extreme as Sandy, but have a similar impact. So, that is a little bit of a prelude of what we think can happen."

The East Coast seems ripe for development this year and Sandy and the November nor'easter may indeed be a sign of things to come. If this is the case, the majority of our snowfall may come in just a handful of storms.

So to sum it up, we are forecasting a pretty typical New England winter, complete with significant bouts of cold and snow, a stark contrast to last winter.

BUT our atmosphere is a crazy place AND always full of surprises.  IF we have learned anything over the last two years it is expect the unexpected.

We would love to know what you think!

Whoever comes closest to the actual snow total this year in Boston will win a season ski pass to Wachusett Mountain! See if you can beat the experts!