By Wednesday evening, at least four people were confirmed dead, along with dozens of injuries.  Governor Patrick has declared a State of Emergency.

Speaking at MEMA headquarters after 9 p.m., Gov. Patrick said the National Guard would be fully deployed by Thursday morning, with 1,000 guardsmen on duty. He reported extensive damage in Hampden County, including more than 48,000 customers without power.

Gov. Patrick urged people to dial 2-1-1 to receive non-emergency information. He also encouraged residents to check on their neighbors if it is safe to do so, and said he won't know specifics about shelters until officials can determine how many people have been displaced by the severe weather.

The governor asked schools in the 19 affected communities to close for the day Thursday.

Gov. Patrick added that there were preliminary reports from State Police Col. Marian McGovern of looting in downtown Springfield after the first of two tornadoes ripped through the city.

The Roman Catholic diocese of Springfield said a retired priest was among those injured.

Mark Dupont, a spokesman for the diocese, said the storm damaged St. Michael's Retired Priest Residence. He said one priest was injured and the remaining priests living at the facility were moved to a nearby rectory. The extent of the man's injuries was not immediately known.

Dupont also says some windows at a Catholic high school in Springfield were blown out during the storm but all of the students were safe.

"You could see things were coming," said Deborah McCarthy, who witnessed the tornado in Springfield from inside an office building. "Trees were starting to snap around us and the windows smashed on the upper floors. You can see cars flipped over, too." 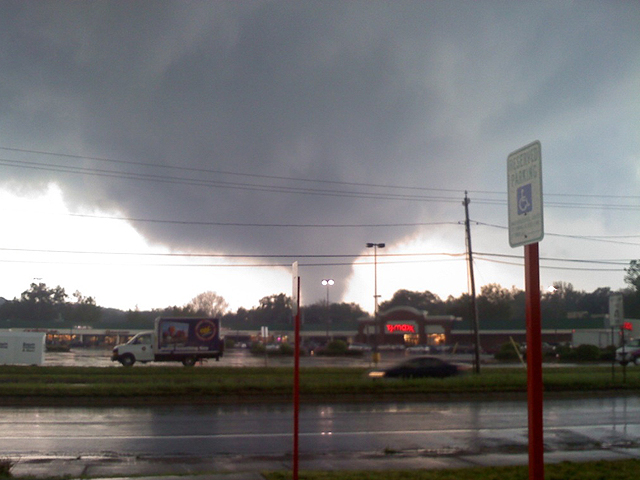 "This is a major, major, major situation; a very dangerous situation," said WBZ-TV meteorologist Todd Gutner during the height of the storms.

According to WBZ-TV's Diana Perez, there were some people on Union Street in Springfield trapped in homes. Emergency crews were working into the night to get everybody to safety. As Perez was live on television Wednesday evening, a man covered in dust and blood emerged from the ruins of a home, where a child remained trapped.

Ray Webber, a Skywarn weather spotter in Springfield, said he saw a wall cloud and the formation of a tornado. He said there were lots of trees down and at least one tractor trailer on its side.

Pictures of Springfield show severe damage. There are many buildings missing roofs, others with their fronts torn off, and some completely flattened. There is also an obvious path of trees torn down.

The state police activated its Special Emergency Response Team and members of the K-9 Unit to assist in searching damaged structures for survivors.

In Westfield, video showed a school with its roof torn off and classrooms littered with debris.

There were reports of debris falling from the sky miles away, in towns like Milford and Medway.

(TM and © Copyright 2011 CBS Radio Inc. and its relevant subsidiaries. CBS RADIO and EYE Logo TM and Copyright 2011 CBS Broadcasting Inc. Used under license. All Rights Reserved. This material may not be published, broadcast, rewritten, or redistributed. The Associated Press contributed to this report.)