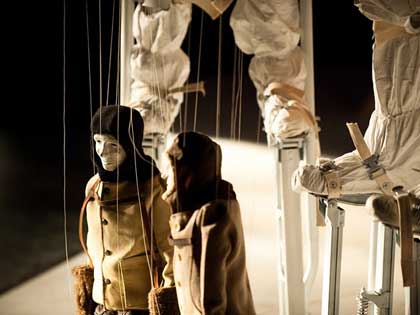 Ernest Shackleton's 1914 trip across Antarctica is a legendary tale—the explorer's attempt to cross the continent resulted in a stranded ship that later sank and required a valiant rescue effort to save the lives of his crew. You can see the expedition depicted onstage this month with a mix of four foot tall puppets, music, photography, and film in The Phantom Limb Company's 69°S: The Shackleton Project at Paramount Mainstage. The production features original music from The Kronos Quartet. Erik Sanko and Jessica Grindstaff, the Phantom Limb Company's founders and co-artistic directors, recently talked with CBSBoston.com about the inspiration for the production, their trip to Antarctica, and working with puppets.

CBSBoston.com: What inspired 69°S: The Shackleton Project?
Jessica Grindstaff: The initial idea came from a staging perspective. We're a puppetry company and work with marionettes, so the stage has to be as deep as the arm can reach, or you have to build a bridge structure over the stage. Erik suggested putting them on stilts to have total access to the stage.

Also, I was interested in making a boat, and while I was walking down the street in New York on a 90-degree day, I kept imagining an all-white background with a boat. It made me think of the images by Frank Hurley—he was the ship's photographer, and if you've ever seen them, they're burned into your retina. We already knew the story of Shackleton, so we started to deeply research it and found out about the grant from the National Science Foundation to go to Antarctica to do research.

CBSBoston.com: What went into research?
JG: One of the places we spent a lot of time was at Dartmouth College. We did three residencies there. The Rauner Special Collections Library has the largest collection of polar expedition archives in the U.S. We were doing a show there, so in the mornings before going to the theater, we went to the library for a few hours to paw through everything they had. On one of our last visits we found one of the handwritten journals, and we spent two weeks researching and photographing that. There's also a polar studies department at Dartmouth, so we spent time there. Then the first time we walked on stilts with a puppet we did it there, and it's where we experimented with the language of dance in the piece. So it was really a laboratory for us.

CBSBoston.com: What was your trip to Antarctica like?
JG: Erik recorded sounds, like natural sounds like ice and wind and seals and penguins. We also did man-made sounds. I wanted to record the light, and I ended up taking a lot of video to document it. We also spent a lot of time talking to scientists about their work and how it relates to climate change.

CBSBoston.com: How do you connect the past with the present?
JG: We choose to work with the future as well as the past to contextualize. We started to ask ourselves questions, like 'why is this Shackleton story important?' We found the answer to that in the future of Antarctica and the way we're dealing with climate change.

CBSBoston.com: What about working with puppets appeals to you?
ES: There's a quality that inspires one to use their imagination. When a puppet is operated in a way that can get the audience members invested, the emotion can be as profound as the audience member is willing to invest.

JG: And they can do things physically that humans can't do. We've experimented with them in ways we had never done before, like showing the puppet feel grief. We lift them off the ground and have the puppeteer cradle them. It's much more moving than how we familiarly accept the language of grief.

CBSBoston.com: How long does a show like this take to put together?
Erik Sanko: It took us four years to do. There's no template for how to make a complete piece, since all these elements were never combined together. We work in an extremely collaborative way, with trial and error. We know how to support each other. We've ironed out the kinks in a way that in the future it won't take four years.