BOSTON (CBS) - The snowstorm Friday will be big, but will it be historic and rival some of the legendary storms of Boston's past?

I think it is safe to say that Friday's storm will easily be the biggest one of not only this season but last season as well.

In fact, Boston has the chance to see as much snow in this one storm as they have seen in total from this winter and last!

Your Questions: Ask The Weather Team

Only six times in Boston's weather history (more than 100 years) has more than 20 inches fallen in one storm. You truly need the atmosphere to set up just right for a blockbuster snow event.

It seems that all the ingredients are in place at this point.

First we have an ample supply of cold air pouring out of Canada.  Low temperatures Wednesday night will be in the single digits in many of the suburbs and highs on Thursday will only reach the mid 20's.

Next, we have a very "juicy" storm coming from the Deep South, out of the Gulf of Mexico with plenty of moisture to work with.

And like so many other storms preceding it, as it reaches the warm current of the Gulf Stream of the Mid-Atlantic it will "bomb out" and become a very powerful nor'easter.

Finally, there is always a concern along the coastline for a mix or change to rain due to the relatively mild Atlantic Ocean.

This year, the Atlantic waters are actually much warmer than normal off the New England Coast, this being one of the main reasons why Boston has seen so little snow to this point and a spot like Worcester has had a much more "normal" winter.

However, the fact that this storm is happening in February and not December is a big deal.  The ocean is always at its coldest in February and early March because of the lag time it takes for such a large body of water to cool. Therefore we are forecasting a mainly snow event this time near the coast with just some mixing over the Cape and Islands.

Light snow could begin as early as Thursday night and Friday morning. Nothing significant for Friday morning's commute, but don't be surprised if there is a dusting here and there.

The storm really ramps up quickly late Friday afternoon. By nightfall on Friday it will be snowing steadily everywhere and the winds will be starting to crank at the coastline, 20-to-40 mph+.

Snowfall rates will increase to an inch or two per hour overnight, likely creating blizzard conditions for many areas. In fact, the National Weather Service has already issued a blizzard watch for most of Eastern Massachusetts.

(By the way, if you are wondering what makes an official blizzard, you need falling and or blowing snow reducing visibility to less than a quarter-mile with frequent sustained or wind gusts greater than 35 mph for at least a 3-hour period).

The snow will peak from 7 p.m. Friday night through 11 a.m. on Saturday. Some of the heaviest snow bands may come early Saturday morning when snowfall rates greater than 2" per hour are possible. Snow will finally begin to taper by midday on Saturday and the cleanup can begin Saturday afternoon

The best chance of seeing a "blizzard" would be nearest to the coast, perhaps even in Boston when winds will be strongest Friday night.

The snow will continue all night into Saturday morning and likely begin to taper around midday Saturday.

We are looking a widespread dumping of 1-to-2 feet of snow for most of southern New England.

There could be a bit less along the coastline in far southeastern Massachusetts and over the Cape and Islands due to mixing.  Eight-to-12 inches+ is expected down there. 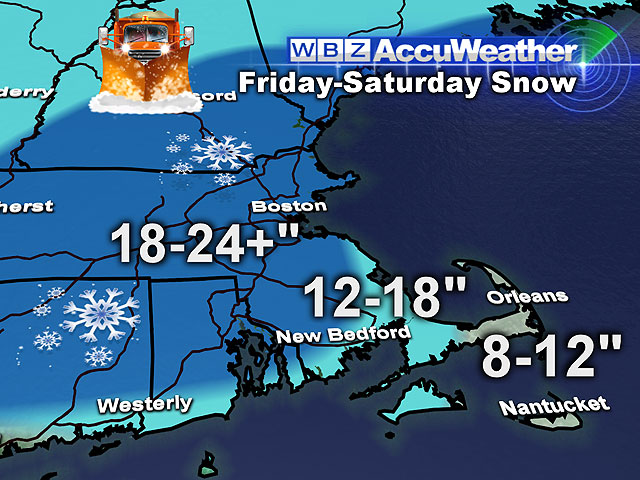 Again, if the storm sets up just right, and that is a very distinct possibility, final snow amounts will rival that of our greatest snowstorms in Boston history, including the 27.1 inches in 1978. This is the type of storm and setup which has the potential to produce 30 inches or greater in some locations!

The first high tide of concern occurs Friday night just before 10 p.m. There will likely be minor to moderate coastal flooding from 8 p.m.-midnight with significant splashover and beach erosion. Of greater concern is the next high tide on Saturday morning when tides are much higher astronomically speaking. Tides rise from a base height of 9.5 feet on Friday night to 10.9 feet on Saturday morning, cresting around 10 a.m. This could set the stage for some pockets of major coastal flooding between 8 a.m. and Noon on Saturday.

Thankfully, tides are not astronomically that high.  The high tide to watch is around 10 p.m. Friday.  We are expecting minor to moderate coastal flooding at that time. Seas will be very rough, well over 10 feet and some beach erosion is inevitable.

While there is still time for the forecast to change, this is not going to be a miss.

A significant snowstorm is almost certain at this point with just the finer details to be worked out.

You should begin preparations for a major, crippling snow event, unlike we have seen in several years. And of course stay tuned to updated forecasts.

Here's some statistics to put this storm into perspective:

3.2 inches: The biggest snowstorm so far this year.