BOSTON (CBS) - For the third straight weekend, we are in for a significant winter storm. And at this point, 2-to-3 days away from the actual event, we are very confident with certain aspects of this storm.

First of all, it is coming.  It will not be a miss and this is something we couldn't say with great certainty last weekend.

Next, this storm will be very different from the last two, mainly because it will be a warmer storm.

There will be a very significant rain-snow line in southeastern Massachusetts and it will be moving first to the north and then back to the south.  The close proximity of the rain-snow line of course means that temperatures will be near or above 32 degrees for a good portion of southern New England.  This will translate into a much heavier and wetter snowfall for most compared to our last two weekend storms. 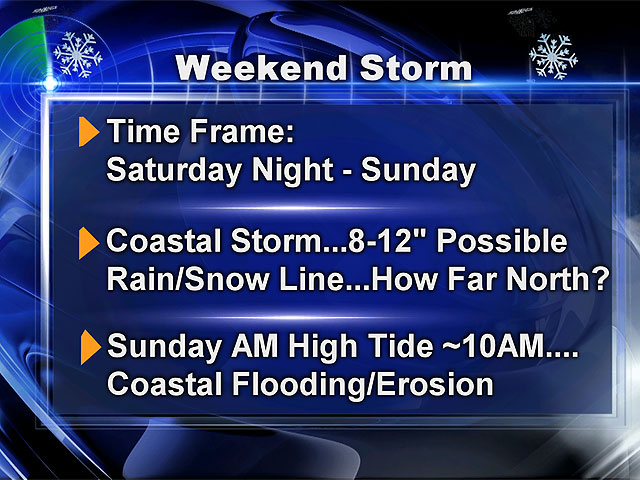 We also know that the winds will not be as severe with this storm. While gusts are likely to reach up to 50 mph along the South Shore coastline and over Cape Cod, the entire wind field will not be all that expansive.

This point should not be overlooked.

When you get heavy, wet snow combined with strong winds that is a recipe for damage and outages. There will likely be some scattered problems, especially near the coastline, but we are not expecting any widespread damage or loss of power.

Some light rain or snow could fall as early as Saturday afternoon, mainly to the west. The steady precipitation will not arrive until after 7 p.m. and it will come from south to north. So initially, in the early hours of this storm, areas to the south will be the first affected.

After 10 p.m. it should be snowing lightly to moderately in all of southern New England with some mixing occurring along the South Coast and over Cape Cod.

A widespread 1-to-3 inches should be on the ground by midnight.

The most intense snow and the peak of this storm will come after midnight from about 1 a.m. through 1 p.m. During this time snowfall rates of an inch per hour will be widespread.

The rain-snow line will also reach its northward peak, perhaps as far north as Boston and the Mass Pike around 5-to-7 a.m. and then it will crash back to the south as the winds change to a more northerly direction.

Rain will change back to snow for all of southern New England by 10 a.m. The snow will taper during Sunday afternoon from west to east.

The coastline and the Cape will be the last to completely clear, late Sunday afternoon.

The "jackpot" with this storm will be north and west of Boston, most likely in the Worcester Hills and southern New Hampshire.

A solid 8-to-12 inches is just about a lock up there and I could easily see amounts climbing as high as 15-to-16 inches in spots. 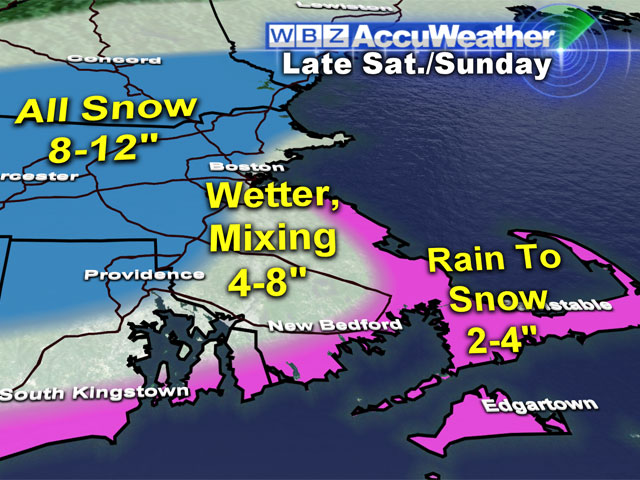 Closer to the coastline, from Cape Ann to Boston and the South Shore, the snow will be very heavy and wet and not accumulate so readily, so we are calling for 4-to-8 inches in those locations.

However, if the rain-snow line stays a bit farther south, the 8-to-12 inches line could easily end up being closer to the coast and to Boston.

Cape Cod will see the lowest snow totals from this storm, likely only about 2-to-4 inches coming at the tail end after the rain has switched back over to snow.

As I said earlier, the wind is always a concern with a nor'easter like this weekend's but it will not be nearly as strong as either of the last two weekend events. Most of the strongest gusts (to 50 mph) will be along the South Shore and South Coast including the Cape. 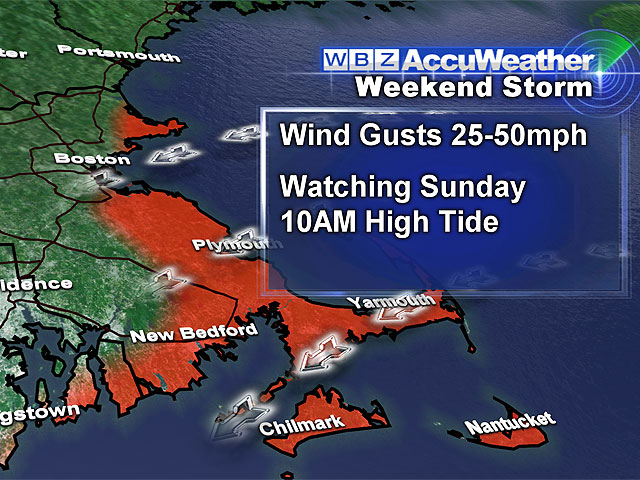 And thankfully, tides are not astronomically very high, so only minor to moderate coastal flooding is forecast, mainly during Sunday morning's high tide (around 10 a.m.).

Our single greatest concern with this event is the rain-snow line. The ultimate location and movement of that line will have huge effects on the final snowfall totals for a large portion of southern New England.

If it stays far to the south and temperatures are just a few degrees colder in the interior, snowfall totals could rise significantly, perhaps 6 inches or greater on top of what we have predicted. So while we are very confident in the large scale features of this storm, the devil may end up in the finer details, which will likely take at least another 24 hours to hash out.