BOSTON (CBS) --  Happy New Year! It looks like 2014 is going to start off with a bang in the weather department as we are in for our first nor'easter of the season.

Here are some of the headlines:

This will be a long duration event with nearly 36 hours of light to moderate snowfall.

It will also be an extremely cold storm.

Temperatures will be stuck in the teens away from the coast and in the 20's right at the shore and down over the Cape. This will lead to a very light and fluffy snow type. In a typical snowstorm, we have liquid to snow ratios around 10:1.  In other words, if we get .5 inch of precipitation, that would be about 5 inches of snow.  In this case, .5 inch of precipitation could mean as much as 10 inches of snow, a 20:1 ratio. One less headache, no precipitation type issues - no rain, sleet or ice of any kind.  This will be a straight snow for all of Southern New England.

Unlike our prior storms this winter, there will be a wind and coastal component with this storm (hence the nor'easter title). Winds will be steady and strong out of the northeast, increasing all day Thursday and peaking Thursday night and early Friday. This, combined with astronomically high tides, will lead to some coastal flooding along the east and northeast facing shores.

Here are the high tides times and expected result for Boston Harbor.  (The times are similar for other east facing locations.)

Minor coastal flooding-splash over expected with the storm just starting and winds not yet at their peak.

Minor to moderate flooding-splash over expected with the storm at its peak, winds 25-to-50 mph, the tide of greatest concern.

Minor coastal flooding-splash over expected with winds shifting from NE to N, pushing water back out to sea, as the storm ends.

Obviously this storm is coming at a rather inopportune time (is there ever really a good time for a foot of snow?), with most people heading back to work and school from an extended vacation.

So let's take you inch-by-inch through the next few days.

Snow will begin in this time period.  It will be mainly light and somewhat spotty, not snowing everywhere. There may be a dusting up to an inch in some locations prior to the morning commute on Thursday. I would expect that most schools and businesses will remain open.

Light, scattered snow continues, again, not snowing everywhere.  There may be a fairly large "snow hole" south of the Massachusetts Turnpike where there isn't much of anything going on. Up to another inch or so in this time frame in scattered, likely northern, locations.

Snowfall will fill in everywhere, places that were spotty will become steady.  The snow will fall from light to moderate in all of southern New England. The winds will steadily increase.  Along the coast they will reach sustained values from 15-to-30 mph and gust up to 50 mph out of the northeast. The midnight high tide will be our primary concern as some pockets of moderate coastal flooding will likely occur. Snow will accumulate more readily, about 2-to-4 inches in this time frame alone, bringing totals up to 3-to-6 inches for most.

The storm will be peaking.  The snow will be at its heaviest and winds at their strongest. Gusts at the coast will frequently top 40 and perhaps 50 mph. Inland, winds will gust 20-to-40 mph.

I expect another 3-to-6 inches in this time frame, bringing storm totals up to 6-to-12 inches. There may be some localized heavy bands right along the coastline, orientated from northeast to southwest due to possible ocean enhancement. Within these bands snowfall rates could top 1 inch per hour and lead to some higher totals over places like Cape Ann, the South Shore, inland southeastern Massachusetts and perhaps Boston as well. It is in these locations that final snow totals may top 12 inches, perhaps as high as 14 or 15 inches if this banding occurs.

The storm will begin to taper from west to east.  The winds will veer from northeast to north-northwest helping to push some of the accumulated water in the bays back out to sea. For this reason, I would not expect the Friday midday high tide to be quite as bad as the prior midnight tide. Winds will remain gusty 20-to-40 mph+.  Not much additional snow accumulation in this time period so the cleanup can begin! 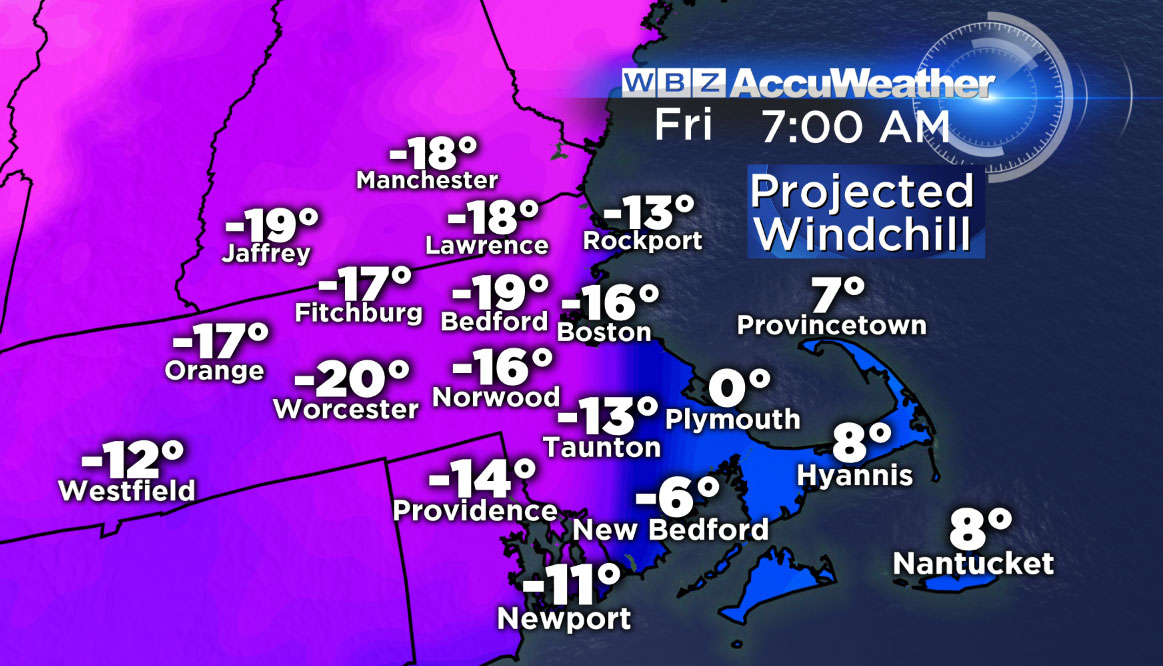 While a significant nor'easter now is just about a lock, there is still room for a slight shift in track and intensity of this storm.

So I would advise staying tuned for updates throughout the day Wednesday.