BOSTON (CBS) - All is quiet, yet very cold, in the weather department today.

Partly sunny skies will prevail with blustery conditions that will make it feel even colder than the actual reading on your thermometer. Highs will be between the upper 20's (north and west) to the lower 30's (south and east).

Friday will allow for more snow melt before the next storm makes its arrival. It will be a sunnier day with calmer winds. Highs will be closer to 40.

Clouds will begin to thicken Saturday morning before a rain-snow mix begins to fall later in the day. Highs will be in the upper 30's.

The main time frame we are concerned about right now is Saturday night through late-afternoon Sunday.

What we know is that a coastal storm will be hitting New England.

What we don't know is how far north the rain-snow line will set-up on Saturday night.

This is crucial when determining the snowfall forecast.

Models show a period of rain-mix for southeastern Massachusetts at times on Saturday night. Some models bring it as far north as the Mass. Pike to the northern suburbs of Boston.

Obviously, this would lessen snowfall amounts in these cities and towns.

Overall, there is still a good chance of an 8-to-12 inch swatch of snow from the North Shore to the Pike to points north extending into southern New Hampshire. 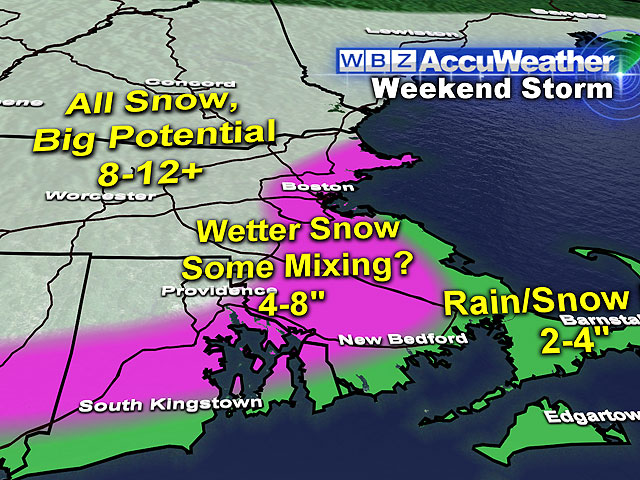 Then, a general 4-to-8 inches of heavy, wet snow from Worcester to Boston to the northern tier of Plymouth and Bristol Counties.

Then, a concoction of rain-mix-snow for areas south and east, including the Cape and Islands, will see approximately 2-to-4 inches of heavy, wet snow.

Another area that we are focusing on is the coast. Winds will be persistent from the SE-E-NE throughout an 18-to-24 hour period.

The main focus will be on the Sunday morning high tide around 10 a.m. With winds howling at a 25-to-50 mph clip, there may be minor to moderate beach erosion and coastal flooding for east-facing and north-facing beaches.

This month is currently 7th on the list of all-time snowiest Februarys in Boston with 32 inches.

If the city receives an additional 9.3 inches, it will tie a new all-time snowiest February record, which is currently held by February of 1969 with 41.3 inches.

Thankfully, the beginning of next week starts off quietly.