BOSTON (CBS) - Here we go - another round of rain, snow and wind is on the way and this one will be slow to depart.

I believe that the biggest concern with this storm system is for the coastline. There will be major beach erosion, seas just offshore greater than 25 feet and three consecutive high tides with flooding.

There will be some light rain and snow showers the rest of Wednesday, but that is really just an appetizer, not really associated with the main circulation of the storm.

The main shield of rain and snow will come ashore on the South Coast around 11 p.m. and pinwheel north to about Boston by dawn Thursday.

So for Thursday morning's commute, most of the snow will be located in southeastern Massachusetts with a rain-snow mix along the immediate coastline and over Cape Cod.

I expect the roads will be mainly wet with temperatures near or slightly above 32 degrees. Most accumulation will occur on vegetation and old snow packs.

During the day on Thursday, snow will continue at varying intensity in eastern Massachusetts, but it will have a hard time accumulating with marginal temperatures at the ground level. Not to mention, this time of year, without a strong source of cold air, getting snow to accumulate during daylight hours is not easy.

So you should expect heavy, wet snow for most of Thursday in eastern sections and then by Thursday night it will begin to expand westward into central and western Massachusetts. This is when the greatest amount of snow accumulation will occur.

As dark falls Thursday, the snow shield expands and temperatures drop ever so slightly, we will likely see snow start to accumulate on roads.

It will still be snowing in most locations during Friday morning's commute with a mix along the immediate coast. This will likely be the toughest commute of the next several days with several inches on the ground from overnight.

During Friday morning and closer to midday, the intensity of the precipitation will lighten up and with that, likely change to a light rain or rain-snow mix. It will all end by Friday afternoon.

Amounts are a tough call due to the heavy, wet nature of the snow. If you were to go out with a board and ruler every hour and continually wipe it off, you may find significantly higher snow totals than what actually is observed with this storm. 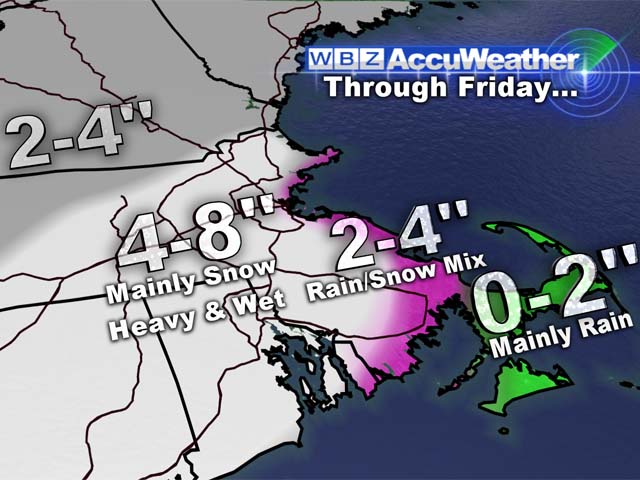 The snow will melt and compact constantly. Normally an inch of liquid precipitation is equivalent to 10 inches of snow (a 10-1 ratio).  With this storm that ratio will be closer to 5-1 or 3-1.  So while we may get nearly 2 inches of liquid precipitation, that will only equal about 4-to-8 inches of snowfall in the end. And, it will never look like 4-to-8 inches at any given moment due to it compacting and melting. But, of course, we have to give an accumulation, so 4-to-8 inches should do it for most of our area with lower amounts along the immediate South Shore down to Cape Cod.

The greatest concern with this event will be along the coastline. There will likely be a significant impact for the entire Massachusetts coast with severe beach erosion and flooding.

Our coastline has already been battered this winter and changed forever, so this storm will only compound the issues.  No doubt that when you head to the beach this summer, many parts of our coast will not look familiar to you.

Some of our most serious coastal flooding and erosion have come during long duration events, much like this one. The problem is, when you have persistent, strong onshore winds for several high tide cycles in a row, the water has nowhere to go and never gets a chance to go out.

While tides are not astronomically very high, the long duration of the storm, lasting for at least three high tide cycles will build the seas higher and higher. Storm surge values will be around 2.5 to 3 feet for each high tide (7 a.m. Thursday, 7 p.m. Thursday and 8 a.m. Friday).

Each tide will become more problematic than the last with the surge being unable to drain out to sea. The seas will build to around 25 feet just offshore on Thursday. Given all of this, minor to at least moderate coastal flooding is being forecast for the duration of this storm, with the potential for some pockets of major flooding.