BALTIMORE (WJZ) -- The continuing loss of hundreds of Baltimore residents each year to murder brings trauma on a personal and public scale, leaving survivors to honor their loved ones at memorials citywide.

Overnight, the city reached 300 homicides for the fifth straight year.

Gregory Riddick, Sr., gets off the Number 54 bus every few weeks to return to the corner of Harford Road and Homestead Street.

"Well, he's gone physically. But, spiritually, he's still here," Riddick said. "There's still people who live in the neighborhood and know who he is."

In 'the Chum' neighborhood of northeast Baltimore, his son was fatally shot.

"Little Greg. That's what they called him," he said.  It'll be three years next month. "Yeah, on December 10th. Yeah."

Riddick carries a piece of his son with him, but this is where pays tribute.

"For my son, he was cremated, so this is like a memorial for my son," he said.

"You see 'em today. Tomorrow, some of 'em gone. All up and down the Avenue, you see the teddy bears," Wayne Morris said.

"When people drive by, they recognize it. They see that something devastating happened in their communities," said Dr. Paulette Williams-Tillery, a social work researcher with Roberta's House, a family grief support center in Baltimore.

They are scattered and tattered across Baltimore's landscape.

"All over the place," Mitchell Waters said.

Memorials span from northwest to east Baltimore. Among them is one for Maurice Braham, who died in 2016.

"People still are hurt about it and he will never be forgotten," said Chris, Maurice Braham's friend.

Chris said the memorial serves as a way to let his friend know he won't be forgotten.

"He will live on through us. His children will know," Chris said.

"Right here. Here they go when they was younger." Jerome Peay said, pointing to a shrine for friends Malik Hall and Tony Austin.

Their corner is covered with bottles, balloons, and banners.

It's the pictures covering a light pole, Jerome likes most.

"Come up here and look at the pictures. Think about all the times we had. Memories, that's all it is, memories. That's all we got left is memories," Peay said.

"It also reminds us a person was here. This particular individual was here. There's a family. There are survivors left behind every time there's a homicide committed," Williams-Tillery said.

Research says for every one person who loses their life, there are at least seven to 10 close relatives left behind, she said.

Secondary victims are impacted, too.

"Most of all, it affects the community, so the community also mourns the individual who has been lost," Williams-Tillery added.

"It's not just him. You go everywhere. There are so many shootings going on in the city, it's crazy. Every other corner you go, you got balloons and memorials and teddy bears and drinks and stuff," said Chris.

They are like urban tombstones, marking society's failings. This block on East Lafayette is a metaphor for Baltimore's burial ground, with memorials or markings for six people lost on one block. 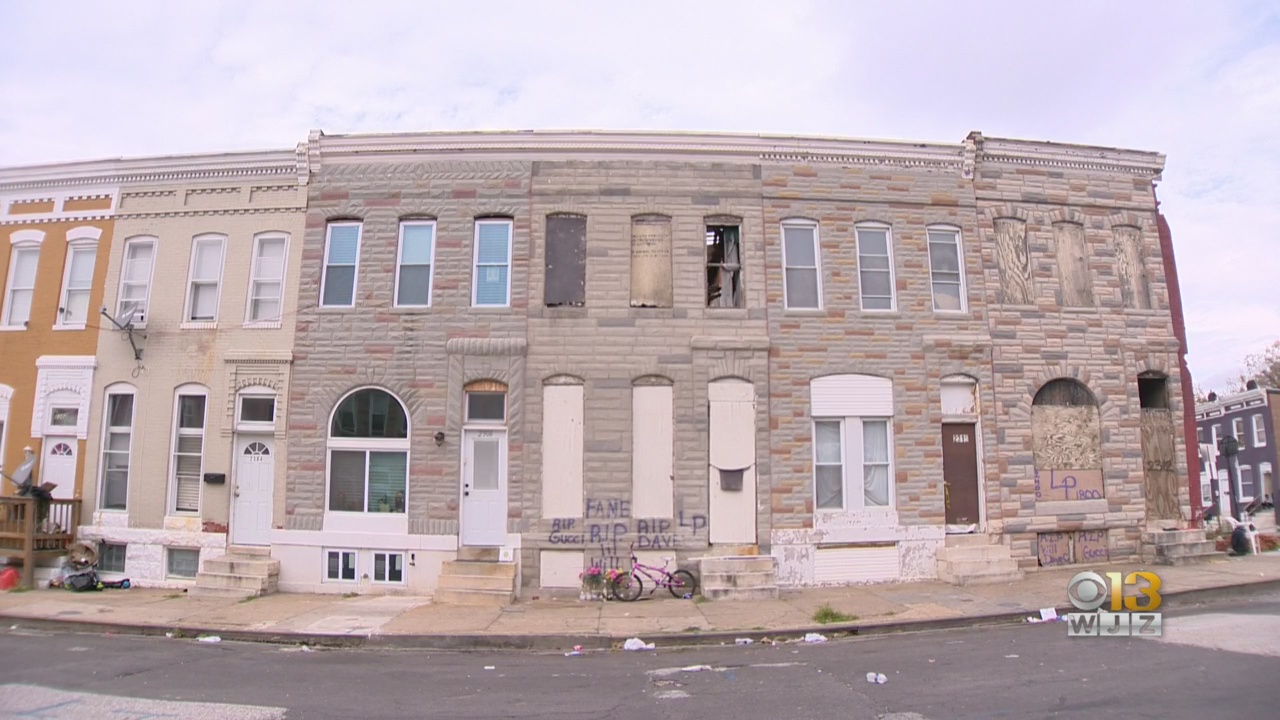 "It's just showing love to somebody who's gone, who's no longer here," Nick, a resident, said.

"Even when they're gone, they're always with us," Peay said.

It's a private loss felt publicly. Losing someone to homicide is different by nature, Williams-Tillery said.

"The family has to deal with it publicly. We have the news cameras, right? You have the community that's also involved," she said.

Balloons are seemingly used to mark death as often as they are to mark life.

"It's unnatural. But, here in a Baltimore, it seems like it's natural," Riddick said.

"A lot of times, you know, people don't always have money for funerals, so this is one way of showing your love," Nick said.

"We have young children who are coming by and seeing this and they know what it's about," Williams-Tillery said. "We're moving from post-traumatic stress to continuous trauma. They're re-traumatized every time they see these things."

The anguish is on display in a city now with hundreds of victims taken each year.

"It never goes away, the pain, the trauma of it," Riddick said.

And good sons, too.