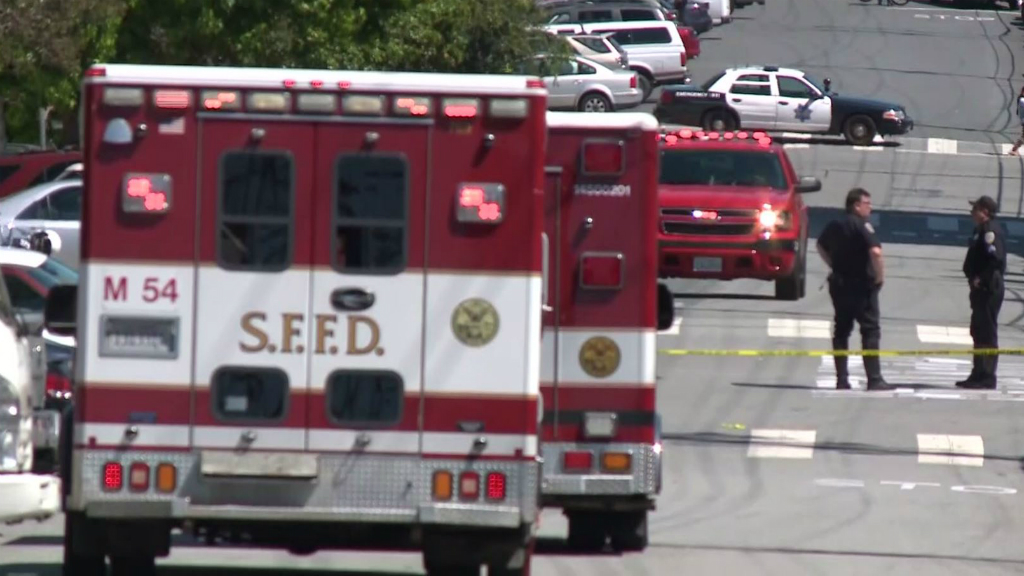 San Francisco Assistant Police Chief Toney Chaplin said that the shooter, a UPS employee in uniform, was among the dead. When police found him, he was still armed with an "assault pistol" which he then put to his head and killed himself, Chaplin said.

Police confirmed that the gunman has been identified as Jimmy Lam, 38, of San Francisco.

On Wednesday evening, a union official said the gunman had recently filed a grievance complaining that he was working excessive overtime.

Still, Cilia says Lam wasn't angry, and he could not understand why he would open fire on his colleagues.

Sources tell KPIX 5 Lam walked into a morning meeting, shot and killed three of his coworkers before turning the gun on himself. Two other UPS employees were hospitalized.

"When the meeting started he walked up to Wayne, then Benson and shot them," Cilia said.

Cilia said Lam had to chase another victim, known as Big Mike, outside because he ran away.

350 people work inside the facility. All were directed to evacuate with their hands up during the incident. Neighbors were told to shelter in place.

One witness told KPIX 5 Lam was known to be a hothead with a short temper who sometimes had arguments with other coworkers.

Other coworkers told KPIX 5 off-camera they were not surprised Lam targeted the victim. More than one employee said Lam walked right past other UPS workers Wednesday morning and opened fire directly on his target.

Family members have also identified one of the victims as Mike Lefiti -- a veteran driver who leaves behind three children -- two sons and a daughter. He was known as Big Mike.

"He was a nice guy," said Jaime Sandoval, a friend of the Lefiti family. "I've known him since I was a kid. Every time I see him, he was always nice. A cool dude. He had a lot of respect and love for his family. I'm just pretty shocked."

The shooting was reported around 9 a.m. at the packaging and sorting facility at 320 San Bruno Ave.

Chaplin said investigators haven't determined a motive for the shooting and that there was no evidence that terrorism played a role.

UPS spokesman Steve Gaut said the employee opened fire inside the facility before the drivers were sent out to do their normal daily deliveries.

The wife of one of the survivors told KPIX 5 that her husband said the gunman broke into the workers safety meeting and shot three employees "execution-style."

"My husband called and was in distress," she told KPIX 5. "So I only got pieces. He just wanted to let me know he was okay. He said someone started shooting execution style and he just started running."

San Francisco police tweeted at 10:33 a.m. that the building had been secured. Special operations officers were continuing to search the building for more possible victims.

Nearby, auto shop owner Robert Kim said he heard about five to eight rapid gunshots. The next thing he knew, he said, "there's a mob of UPS drivers" running down the street screaming "shooter, shooter."

The San Francisco Office of Emergency Services said 911 calls began coming in around 9 a.m. of an active shooter at the massive facility.

San Francisco Mayor Ed Lee issued a statement thanking "our brave officers of the San Francisco Police Department, and our dedicated employees at 911 and San Francisco General Hospital." He added:

I also want to offer my condolences and thoughts for the individuals and families affected by the senseless act of violence at the UPS facility. We all know the familiar faces of our local UPS drivers and delivery persons. Today's tragedy will be felt in every community served by these committed employees.

I was heartbroken to learn that yet another senseless act of gun violence has marred our wonderful City. My heart goes out to the victims and their families, and to everyone affected by this despicable act.

I can't help but recall the 101 California Street shooting in 1993, when eight people lost their lives. Violence is never the answer, but the continuing scourge of gun violence is particularly disheartening.

As we learn more details of this shooting, I'm hopeful that we can take away lessons to help prevent these acts from occurring in the future. We must do more to address the underlying roots of these tragic events.

The shooting came the same day a gunman opened fire on Republican lawmakers at a congressional baseball practice in Alexandria, Virginia wounding U.S. Rep. Steve Scalise of Louisiana and several others.

TM and © Copyright 2017 CBS Radio Inc. and its relevant subsidiaries. CBS RADIO and EYE Logo TM and Copyright 2017 CBS Broadcasting Inc. Used under license. All Rights Reserved. This material may not be published, broadcast, rewritten. Bay City News and The Associated Press contributed to this report.