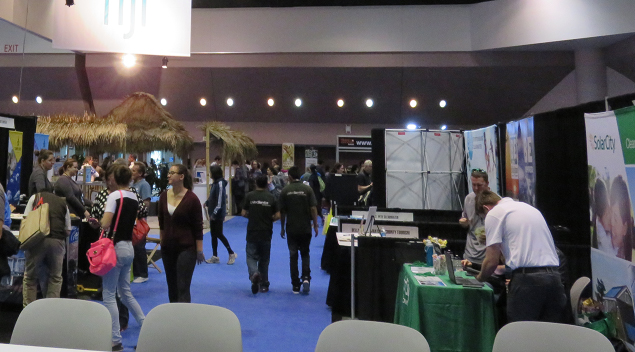 Home to many of the world's most famous tech companies such as Apple, Google and Facebook, the South Bay always has something going on. While there will be plenty of live sporting events, music concerts and festivals during the summer, there will also be a host of business and consumer expos. However, just because Silicon Valley is part of the South Bay, it doesn't necessarily mean that all local summer conventions are tech related. Here are five of the top summer conventions held in the South Bay.

Featuring more than 150 classes and master teachers from all over the country, the Yoga Expo in Santa Clara will draw people of all ages to this family friendly event. The third stop in a seven-city tour, which began and will conclude in Los Angeles, the all day event is intended to strengthen and educate the local yoga community through healthy food choices and yoga and meditation classes and workshops. Additionally, visitors will be able to enjoy vegan food and beverages, as well as shop at the unique 20,000 square foot Yoga Marketplace for merchandise. Registration is available online and children under 12 are admitted free. Said to be the largest event of its kind, visitors should bring a yoga mat and props for the classes and cash, credit card and photo ID for the marketplace.

Hosted by the Bay Area's El Sol Latino Magazine, ExpoSol is expected to draw a sizable crowd at the Santa Clara County Fairgrounds. Described as an excellent opportunity to offer products and services directly to the public, more than 100 vendors will be on hand at the expo along with an impressive lineup of popular recording artists, including former Latin American Grammy Award nominee El Dasa. Also expected to appear on stage are well-known music artists like Liberación, Carmen Rios, Suenatron and Rocio known as the La Dama de la Cumbia. ExpoSol will also feature plenty of excellent food and professional wrestlers from the always popular Lucha Libre International.

Related: 5 Things In The Bay Area That Exist Nowhere Else In The U.S.

Bay Area residents and model railroad enthusiasts from all over the country are expected to attend the 32nd National Garden Railway Convention in Santa Clara. Hosted this year by the Bay Area Garden Railway Society, the national convention is held in a different city each year and showcases all there is to love about model railways in a garden setting. In addition to a large number of model railroad layouts on site, several events are planned before during and after the convention. This includes tours of Bay Area homes with garden railroad layouts, special guest speakers, an exhibit hall with more than 25 vendors, daily clinics and a BBQ at Roaring Camp and Big Trees Railroad in Felton. One of the highlights of the event will be the 2016 National Garden Railway Convention Banquet on Saturday, July 9 at the Great America Banquet Hall and will feature special guest speaker Eric Lynxwiler, author and historian of Knott's Berry Farm.

Gary Davis, Chief Consumer Security Evangelist at Intel Security, will be the keynote speaker at the 3rd annual Wearable TechCon. Held over three days at the San Jose Convention Center in downtown San Jose, the event is being billed as the largest wearable OEM expo of the year and a significant number of vendors and other industry experts will be on hand. Other guest speakers scheduled to appear at breakout sessions include Modai Alaoui, CEO of at Eyeris, Lisa Calkins, CEO and co-founder of Amadeus Consulting, Myriam Joire, former Chief Evangelist of Pebble and Eric Tsai, co-founder of Mbient Lab. During the three-day event, more than 50 tech sessions and panel discussions will be offered to cover industry related topics like Developer Essentials, UI/UX, IoT/Internet of Things and Augmented Reality/Virtual Reality.

The annual Bricks by the Bay Convention celebrates LEGO bricks as a as an art form and popular hobby for Northern California residents. Now in its seventh year, the convention will feature an assortment of workshops on the first day and a public expo on the final day, which is included in the registration fees or as a separate fee. Convention attendees can also take part in an assortment of games and contests from several age categories from ages 10-15 to all ages 18 and up and all ages. This year's theme is "Seven", representing the seventh Bricks by the Bay Convention and all attendees are encouraged to create a LEGO model to commemorate the number 7. The annual event is hosted by Bricks by the Bay, Inc., a non-profit charitable organization and all the work done is performed entirely by volunteers.

Related: Best Observation Decks In The Bay Area
Randy Yagi is an award-winning freelance writer covering all things San Francisco. In 2012, he received a Media Fellowship from Stanford University. His work can be found on Examiner.com