NAPA (CBS SF) -- A suspect has been arrested following a Wednesday morning shooting spree in Napa that left a man in his 20s and another in his 60s hospitalized with gunshot wounds.

Napa police said the men were wounded in two separate shootings before the suspect surrendered to police as he was surrounded in a local art gallery.

Both victims were rushed to Queen of the Valley Hospital with wounds to their upper bodies and were taken into surgery. Their conditions were not immediately known.

Napa police responded at 8:22 a.m. to a reported shooting at the Starbucks on Jefferson Street that left the first victim with two gunshot wounds to his upper body. Investigators said they believe the victim and the gunman were acquaintances.

Police said the suspect -- a white male in his early 20s -- fled the area as a passenger in an early 2000 green Ford Explorer. The shooting victim -- a bearded white male -- was taken from the scene by ambulance and was conscious and talking to the paramedics. 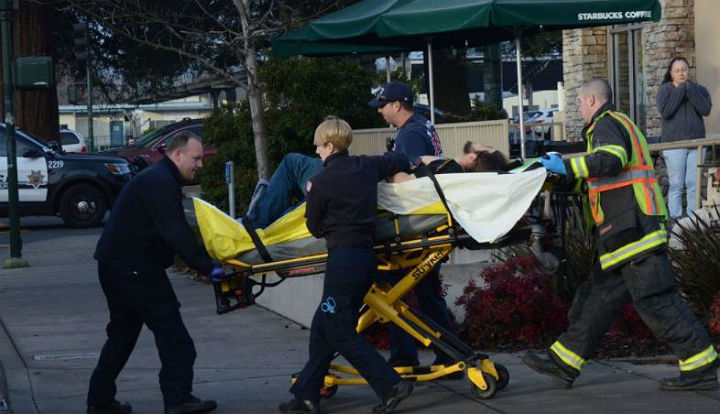 Amanda McLean had just walked into a nearby Starbucks when the shooting took place.

"Right when we sat down, we heard a shot fired," she told KPIX 5. "I knew it was a gunshot so I looked out the window real quick to see where it came from. We saw a guy with a long beard walk toward Starbucks, trying to get away from the guy (the gunman), and he got shot again."

Police believe the two men know each other, but don't know the reason behind the shooting.

The shooting triggered a lockdown at Napa High School which is located across the street. Frightened students were forced to get under their desks. The lockdown was lifted at 9:45 a.m.

Shortly before 10 a.m., a second man who was in his 60s was shot in the vicinity of Baywood Lane and Maclennan Street in west Napa's Linda Vista neighborhood.

"He was a 66-year-old man on his way home and he saw a guy looking over fences and acting suspicious," said Napa Police Captain Patrick Manzer. "So he asked what he was doing and that's when the suspect shot him."

Police said the suspect and the second victim did not know each other.

In a Facebook post, Nickole Iadarola said the police then arrested the suspected gunman in her parking lot off Lincoln Avenue without incident.

"He walked out of the Brown Street Gallery," said Iadarola. "He walked out with his hands up in our parking lot [our address is 1100 Lincoln Ave]."

Police have not yet identified the shooting suspect.

Both shooting victims spent the day in surgery and are expected to recover.