San Jose Police Chief Anthony Mata described the events that led up to the shooting in the city's Rose Garden neighborhood during a Friday morning press conference at police headquarters, identifying the gunman as 32-year-old Robert Seth Carter.

Mata said the incident began when a police helicopter located a stolen Toyota Camry in the area of Story Road and King Road at about 6 p.m. Wednesday. When ground units approached the Camry, the driver sped away, driving erractically and at times going in the opposing traffic lanes on surface streets.

While patrol vehicles did not pursue the Camry, the police helicopter followed it as it traveled onto northbound Interstate 280 and then onto northbound Interstate 880, exiting onto The Alameda and into the city of Santa Clara. As seen from the police helicopter, the driver, who police identified as Carter, then pulled up to a vehicle on Monroe Street, pointed a gun at the driver who ran away, and tried to take off in the new vehicle, Mata said. Carter was unable operate the vehicle for an unknown reason; he returned to the stolen Camry and drove off, back into the city of San Jose.

Several blocks away at the intersection of Park Ave. and W. Hedding St., the Camry crashed into another vehicle occupied by two people. Carter was able to extricate himself out of the passenger window of the disabled Camry which burst into flames, and fled on foot heading north on Park Ave. holding a handgun and carrying a backpack. Mata said he approached a vehicle traveling south on Park Ave. and pointed a gun at the driver, just as a police officer was approaching from the opposite direction.

Mata said Carter fired a round in the direction of the passing vehicle and the approaching officer, but no one was hit. The officer returned fire at Carter, who continued running through a parking lot in the direction of W. Hedding. A second officer heading east on Hedding in a patrol vehicle saw Carter running, pulled up and got out of the vehicle to confront him.

"Carter pointed his gun at the officer. The officer fired his weapon at Carter, striking him at least once," said Mata.

After being shot, the still-armed Carter was able to move to the front yard of a home at W. Hedding and Burrell Court where three other officers arrived. Carter continued to point his gun in the direction of the officer who had shot him and the three other officer opened fire on Carter who was hit several more times.

Carter fell to the ground and the handgun was still next to his hand; a police K-9 arrived and the dog latched onto Carter's leg, pulling him away from the handgun, Mata said.

Police then handcuffed Carter and began to provide first aid until medics arrived. He was taken to a hospital where he died of his injuries.

Mata said the gun Carter used was an unserialized "ghost gun." He had a series of warrants out for his arrest and Mata said the incident could have ended much worse.

"Carter is prohibited from possessing any firearm due to prior felony convictions. Carter ... has five felony warrants for his arrests, and is on probation for battery," said Mata. "The thorough investigation that is currently being conducted will reveal additional details about this event in the coming days and weeks. This is an unfortunate conclusion to a series of crimes and violence that without question could have ended with additional loss of life to both uninvolved members of the public and to our officers who bravely contacted Carter."

Police provided images from the helicopter showing Carter pointing a handgun at approaching drivers and officers, and the muzzle flash from him pulling the trigger. 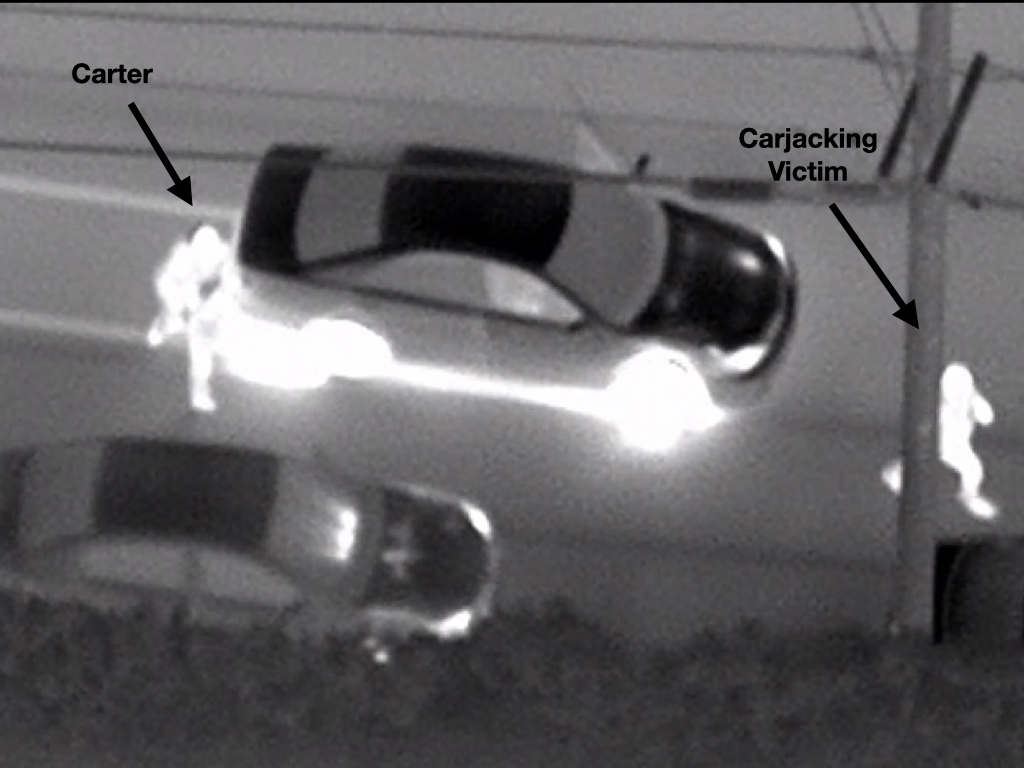 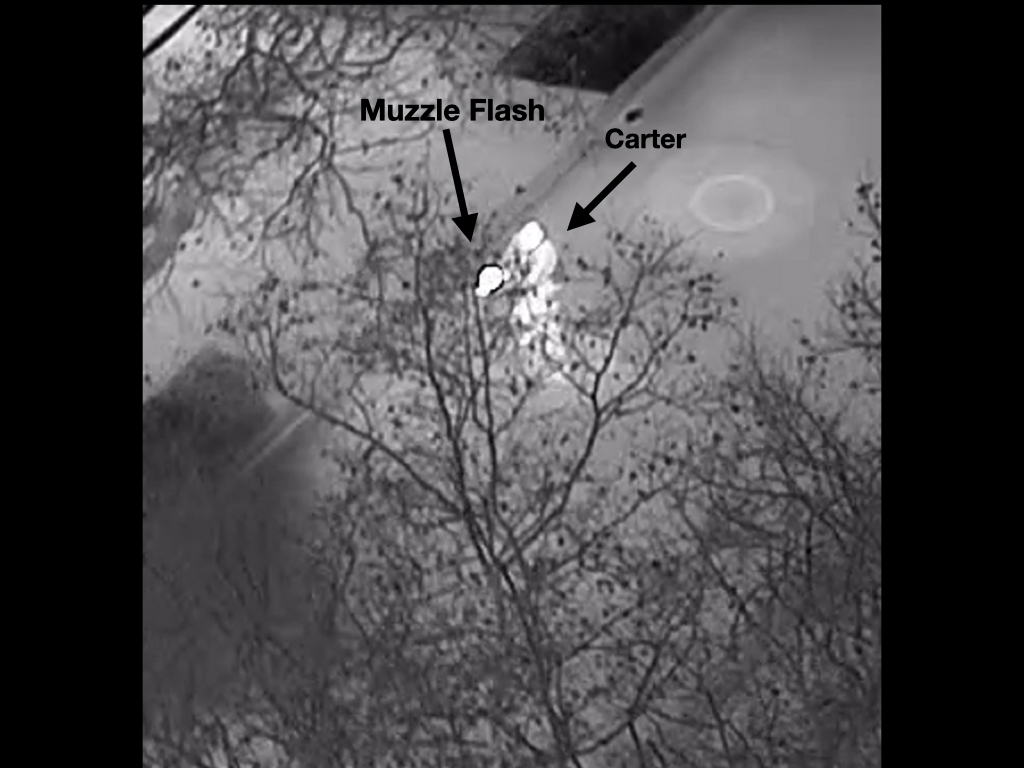 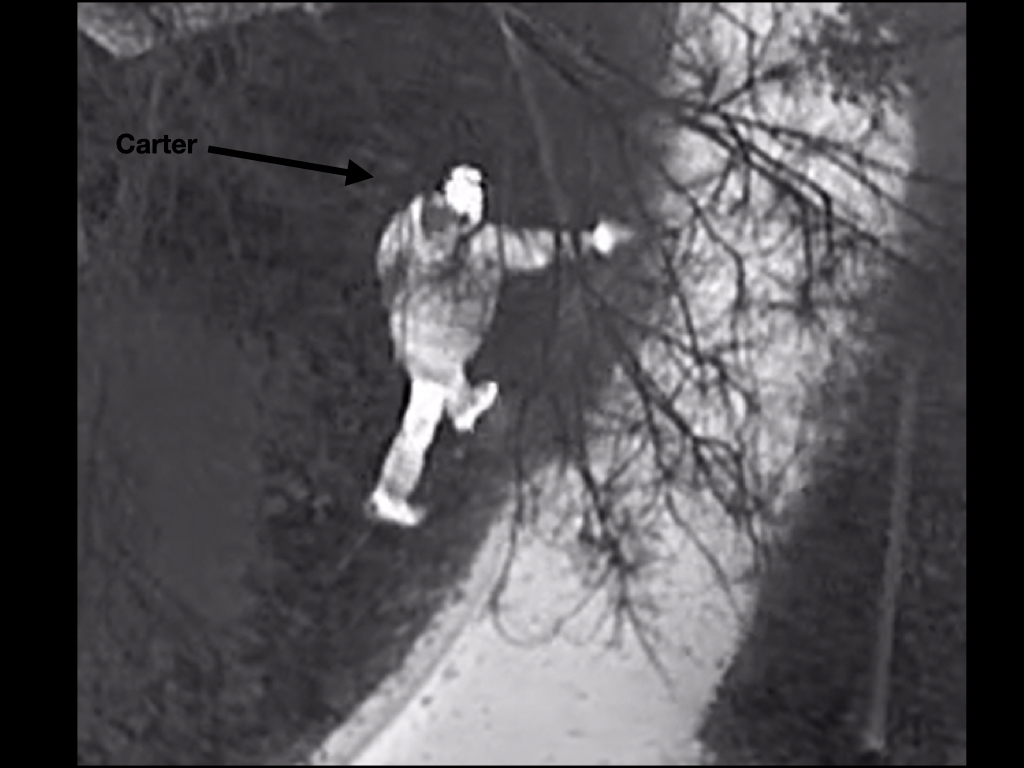 The four officers involved in the shooting were placed on routine administrative leave and will be identified at a later date, Mata said. Mata said the department would release a community briefing video on the shooting in the coming weeks, which would include officer body camera video, surveillance video from the area and the police helicopter video.

No officers were hurt. The two people inside the vehicle struck by the suspect had minor to moderate injuries and were treated at a hospital.

Mata said both department's homicide unit and the Santa Clara District Attorney's Office were investigating the shooting, which would also be monitored by department's Internal Affairs Unit, the city attorney's office and the Office of the Independent Police Auditor.