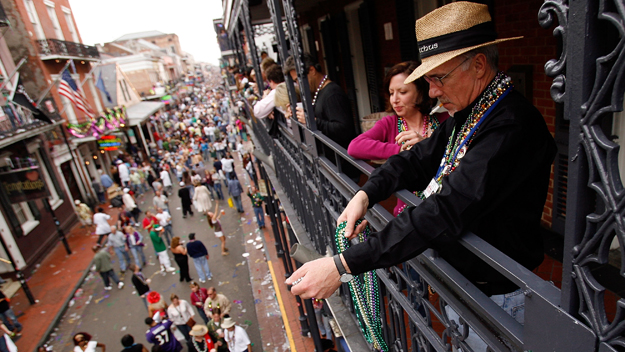 Mardi Gras 2014 may be a few weeks away, but Carnival season has already begun in New Orleans, with brightly colored parades throughout the city and much more to come. One of America's top destinations, New Orleans is a city rich in history, diversity and culture. Home to the first Mardi Gras in North America, hundreds of thousands of people will descend into the city also known as the Crescent City, the Big Easy, NOLA and the Birthplace of Jazz. To see the best of New Orleans during the Carnival season, use this handy guide as reference to some of the best the city has to offer.

Mardi Gras, also known as Fat Tuesday or Carnival, is a religious holiday believed to have originated in medieval Europe. Fat Tuesday refers to grand feasts held before the fasting and prayer season of Lent, in the 40 days leading to Easter Sunday. The start of the Carnival season always begins on King's Day (Feast of the Epiphany) and culminates on Fat Tuesday, the day before Lent (Ash Wednesday).

Mardi Gras in the U.S. unfolds like pages in history, tracing back to 1699 when French explorer Pierre Le Moyne d'Iberville celebrated the holiday at a site christened Pont du Mardi Gras, just south of present day New Orleans. Today, Mardi Gras is celebrated around the world, with the largest festivals in New Orleans and in Rio de Janeiro. This year's Mardi Gras is Tuesday, March 4, and in New Orleans, the raucous celebration takes place in the French Quarter (Vieux Carré), the oldest neighborhood in the city. The official Mardi Gras colors are purple (justice), green (faith) and gold (power).

Related: International Trips You Can Do In A Weekend
How To Get There

New Orleans is accessible via private vehicle, bus, train, air or boat. Louis Armstrong International Airport is located 16 miles east of New Orleans, and serviced by taxis, shuttles, limousines and public transportation. The Amtrak train station is located in New Orleans' Business District, not far from the Archdiocese of New Orleans and two miles from the French Quarter.

Many major New Orleans hotels are sold out prior to the Carnival season and those with available rooms in the French Quarter or the Business District will charge premium rates. Some of the most popular French Quarter hotels are: Royal Sonesta, Maison Dupuy, Hotel Monteleone, The Roosevelt New Orleans and Windsor Court. More affordable New Orleans hotels like The Ambassador Hotel New Orleans, Hotel St. Marie and the Blake Hotel New Orleans are also likely to be sold out and recommended hotels closer to $100 might be booked at locations near the airport or within the greater metropolitan area.

Even though online travel sites suggest certain hotels are sold out, it's helpful to call a hotel directly, in case of a last-minute cancellation.

Related: Best Historical Vacations In The US

Like most New Orleans hotels, many of the city's most popular restaurants may be booked up, especially on the day of Mardi Gras. Nevertheless, New Orleans is foodie heaven, with an incredible array of dining choices, from high-end restaurants to family-run eateries specializing in po-boys, pralines and Louisiana-style king cake. Among the most renowned restaurants in New Orleans are Commander's Palace in the Garden District, the original Emeril's Restaurant in the Warehouse District, Chef John Besh's August, Stella! and the classic Creole New Orleans foursome known as the Grand Dames - Antoine's, Arnaud's, Broussard's and Galatoire's, all in the French Quarter.

In addition to pricey restaurants, other more affordable, yet outstanding choices include local favorites Cochon Butcher in the Central Business District, Chef Leah Chase's Dooky Chase Restaurant in Mid-City, Acme Oyster House, Central Grocery, Johnny's Po-Boys and Yo Mama's Bar and Grill in the French Quarter. The one spot not to be missed is Café Du Monde also in the French Quarter, for the best café au lait and beignets.

During Carnival season, the Big Easy comes alive with more than 50 Mardi Gras parades all over the city. First-time visitors should experience at least one or more parades, but there are many other attractions worth visiting while in New Orleans and the French Quarter. Top attractions include a ride on a Mississippi riverboat and the historical New Orleans streetcars, a visit to St. Louis Cathedral in Jackson Square, Harrah's Casino, the immaculate Southern mansions in the Garden District, the Louisiana State Museum and the National World War II Museum.

While many out-of-town revelers might not arrive to New Orleans until the weekend before Mardi Gras or even later, locals and early arrivers have been enjoying Mardi Gras parades since February 15. Organized by krewes (private social clubs), many parades are named after Greek or Roman gods. Members of krewes are designated with honors similar to royalty, such as kings and queens, dukes and duchesses, knights, princes and princesses, barons and baronesses and captains.

Prior to the parades, krewes put on lavish, invitation-only balls to announce kings and queens, oftentimes well-known celebrities, like Harry Connick Jr., Sandra Bullock and Anne Rice. The most famous krewes include Proteus, Bacchus, Endymion, Orpheus, Zulu Social Aid and Pleasure Club, Muses, D'Etat and Rex, one of the city's oldest and responsible for the official Mardi Gras colors, flag and King of the Carnival. During a parade, krewe members throw Mardi Gras gifts, such as colored beads, plastic jewelry, toys and other trinkets. A familiar phrase commonly heard during the parades is "hey mister, throw me something!"

During Mardi Gras season, drinks will be flowing all over New Orleans but especially in the drinking establishments along Bourbon Street. It's difficult to go wrong with any bar during Carnival season, but among the best include:

Carousel Bar: Located in the Hotel Monteleone, this historic bar has the city's only revolving bar.

Crescent City Brewhouse: The only microbrewery in the French Quarter.

The Krazy Korner: Popular bar in the center of the action during Mardi Gras.

One Eyed Jacks: One of the best spots for live music on Bourbon Street.

Preservation Hall: No alcohol served here and very small, but arguably the most famous music venue in New Orleans.

Tropical Isle: With five Bourbon Street locations, the famous Hand Grenades will be one of the most visible drinks on the streets during Mardi Gras.

What To Expect In The French Quarter

Geographically speaking, the French Quarter is quite large: a 78-square-block area, 13 blocks long and six blocks deep. However, during Mardi Gras, most of the revelry occurs on the famous Bourbon Street and the side streets, from Canal Street to St. Phillip Street.

While the Mardi Gras atmosphere is practically year round on Bourbon Street, the days leading up to Fat Tuesday and the day itself will be far more crowded and can be overwhelming for some people. The French Quarter will be closed to vehicular traffic during Mardi Gras weekend and only residents and hotel guests with special parking passes are allowed past police barricades. Cabs will be difficult to find during Carnival season and visitors should call ahead for reservations. Another good option is to take New Orleans RTA public transportation system to and from the French Quarter. Visitors are urged to get to the French Quarter early on Fat Tuesday.

With a large police presence in the French Quarter, it's generally safe during the Mardi Gras season, but visitors are advised to be aware of their surroundings, avoid carrying large sums of money, remember the address and location of the hotel and most importantly to drink alcohol responsibly, while having an unforgettable time.