Dr. Gabriel Zada, a Los Angeles County-USC Medical Center neurosurgeon, indicated that Bryan Stow, 42, of Santa Cruz, likely suffered brain damage - that could affect memory, thinking ability and even personality - as a result of a severe skull fracture and bad bruising to his frontal lobe.

"He does remain in critical condition and over the next week or so, we'll be able to make a better assessment," said Zada. "At this time, the prognosis remains guarded. It's going to be a long recovery process."

At one point, doctors had to remove the entire left side of Stow's skull to ease pressure on his brain. The pressure was now normal but Stow remained in a coma from his injuries and from sedation to reduce his brain activity, Zada said.

A website, www.support4stow.blogspot.com, was set up for people wishing to donate money to a fund to help Stow's family pay his medical bills.

Meanwhile, Los Angeles Police Det. Jose Carrillo said investigators had several leads and some evidence that was recovered at the scene, but he did not provide details.

Stow's relatives said they did not blame Dodger fans for the attack.

"My family and I just want to express that we have no animosity towards the people of Los Angeles," said Erin Collins, Stow's sister. "We've been received with open arms and love."

Of the attackers, she said, "They weren't true Dodger fans."

Added cousin John Stow: "Though this has been a terrible tragedy done by cowardly people, it is reassuring to know that good people are speaking out and are appalled."

Stow, who is a father of two and works as a paramedic in Santa Clara County, was hospitalized after two attackers kicked him repeatedly in the stadium's F2 parking lot following last Thursday's season opener, which the Giants lost 2-1 to the Dodgers, the LAPD said.

A reward had now grown to $100,000 for information leading to the arrests of Stow's attackers, who remained at-large Tuesday. 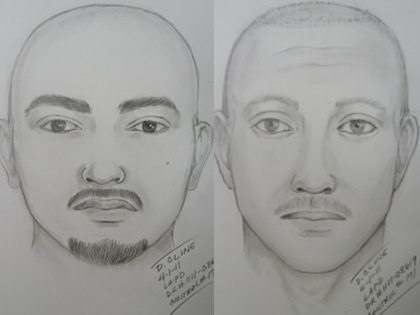 The LAPD previously released sketches of the two suspects, described as Hispanic men between 18 and 25 years old who were wearing Dodgers clothing. The police urged anyone with information about the attack to call them at (877) 527-3247.

The suspects approached Stow, who was wearing Giants gear, from behind and first taunted him before hitting him and knocking him to the ground, where he hit his head on the pavement and was then kicked repeatedly in the head and body.

They then fled in a four-door sedan driven by a woman who had a boy with her, the LAPD said.

Detectives estimated that out of some 40,000 people who streamed into the parking lot after the game, at least 100 probably were near enough to see the attack and he urged them to contact police. It was too dark for video surveillance camera to provide clear images, police said.

Investigators indicated they were also checking an unconfirmed report that three men in Giants gear were punched by the same attackers only minutes before Stow was attacked.

Stow, an enthusiastic Giants fan, was attending his first game at Dodgers Stadium and had looked forward to the game all year, his cousin said.

However, he may have had some worries after arriving.

"During the game, my wife received a text message from him ... He basically said he was scared inside the stadium," John Stow said, adding that his cousin did not usually make such comments lightly.

Stow's parents, two sisters and other relatives attended a news conference at the hospital.

John Stow, who wore a Giants hat and jersey at a news conference with relatives at the hospital, called the attackers thugs who should give themselves up and "have the courage to face the facts and face the book for what you've done here."

Back in San Francisco, the Giants and the San Francisco Police Department announced that extra security would be in place at AT&T Park next week when the Giants host the Dodgers.

"We want to make sure that everyone's safe and there are officers there to deal with whatever should arise, if anything should arise," said SFPD Lt. Troy Dangerfield.

San Francisco Giants spokesperson Staci Slaughter said the team would pay tribute to Stow at Friday's home opener and hold a fundraiser for Stow's family on Monday, the first game of the Dodgers series.

"The goal is to have about a hundred paramedics in uniform asking fans to make a donation at whatever level they can," she said, adding that the team had been inundated with phone calls and e-mails from fans who wanted to help.

(Copyright 2011 by CBS San Francisco. All Rights Reserved. This material may not be published, broadcast, rewritten, or redistributed. Wire services may have contributed to this report.)