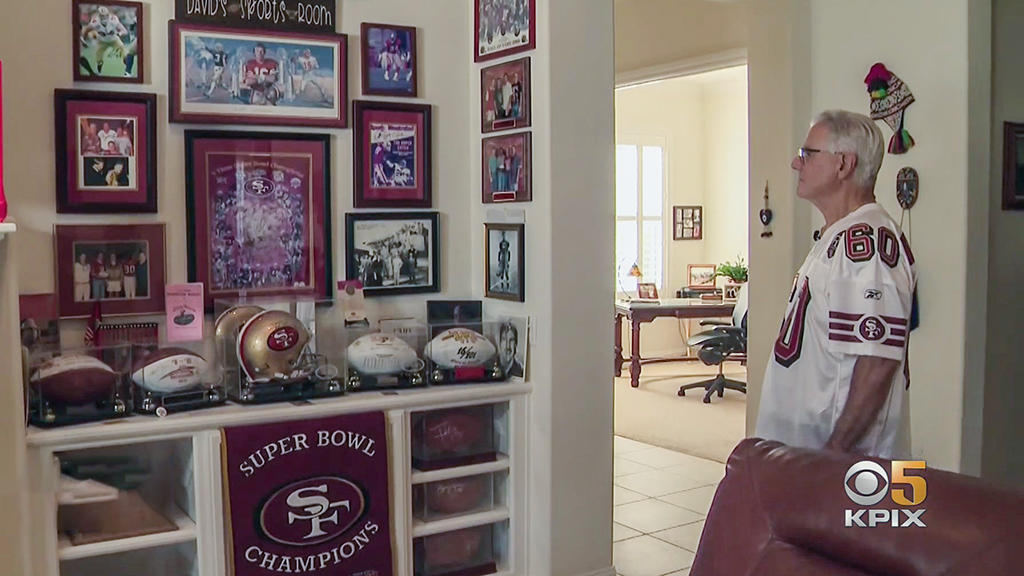 SANTA ROSA (KPIX) -- Among the thousands of 49ers fans at Friday's game, there's one standout who boasts an incredible collection of memorabilia that's taken him decades to build.

David Whetstone of Santa Rosa is undoubtedly one of the most passionate of the Niners Faithful. He was born the same year the team kicked off its inaugural season.

Whetstone said his first memory of the 49ers was the first game his dad took him to at Kezar Stadium when he was 8 years old.

"Instantly a 49er fan, I always liked football 'cause I played a little bit in grammar school and when I saw that (game) I just fell in love with the game, I've been watching it ever since and will never stop," he said.

Count on him to keep collecting. Among his most prized possessions: a seat from Candlestick Park with Joe Montana's jersey number and a signed Super Bowl champions poster.

"It's supposed to be our living room -- living and dining room actuall, But it was an agreement we made," said David's wife Terri Whetstone.

Terri and David met as employees of Xerox. It didn't hurt that she had corporate season tickets at the time. David's passion for the Niners has remained unchanged.

"Team doesn't have an "i" in it and the way that they support one another, just the energy they bring, the excitement, just sucks you right in. It makes you want to be a part of it. Ever since then I've always been a part of it," David said.

Along the way, David has taken a vintage gold 49ers jacket for signatures whenever possible.

David said he loves to share his collection with other fans, friends and family.

On Friday he was watching every play on the field.

David said Bryant Young is at the top of his autograph wish list. He's just waiting for him to make an appearance somewhere and he'll figure out how to get it.

Betty Yu joined KPIX 5 in November 2013 as a general assignment reporter. She spent two years at WTVJ, the NBC-owned station in Miami, as a reporter before moving to San Francisco.