NEW YORK (AP) -- Donald Trump reeled Friday under a barrage of major campaign missteps followed by revelations about lewd comments he made about women several years ago, undermining the Republican's attempts to steady a presidential bid at risk of imploding.

Trump tried to head off some of the damage by issuing a statement apologizing if "anyone was offended" by vulgar remarks captured in a 2005 video and made public Friday for the first time. In the recording obtained by The Washington Post and NBC News, Trump describes trying to have sex with a married woman and brags about women letting him kiss and grab them because he is famous.

"When you're a star they let you do it," Trump says. "You can do anything."

He added seconds later, "Grab them by the p----. You can do anything."

Hillary Clinton seized on her rival's comments, calling them "horrific." She said in a Twitter message: "We cannot allow this man to become president."

The revelations come two days before Trump and Clinton meet in Sunday's second presidential debate, with the Republican urgently in need of a strong performance. After his uneven showing in the first contest, public opinion polls have showed Clinton pulling ahead in nearly all battleground states, some of which are already in the midst of early voting.

Trump advisers planned for him to spend a quiet Friday preparing for the debate and meeting with border security officials. But the day was quickly consumed by a series of controversies, including Trump's unsubstantiated claim about immigrants in the U.S. illegally voting in the election and his questioning the innocence of five black teenagers exonerated in a 1989 rape case.

Then, there were new signs of unusual links between Trump and Russia. For the first time, the U.S. publicly blamed the Russian government for hacking the Democratic National Committee and accused Moscow of trying to interfere with the American election. Diplomats also told The Associated Press that Russia had lodged a formal complaint last month with the United Nations over a top U.N. official's condemnations of Trump.

"It should concern every American that Russia is willing to engage in such hostile acts in order to help Donald Trump become president of the United States," Clinton campaign chairman John Podesta said of the hacking. 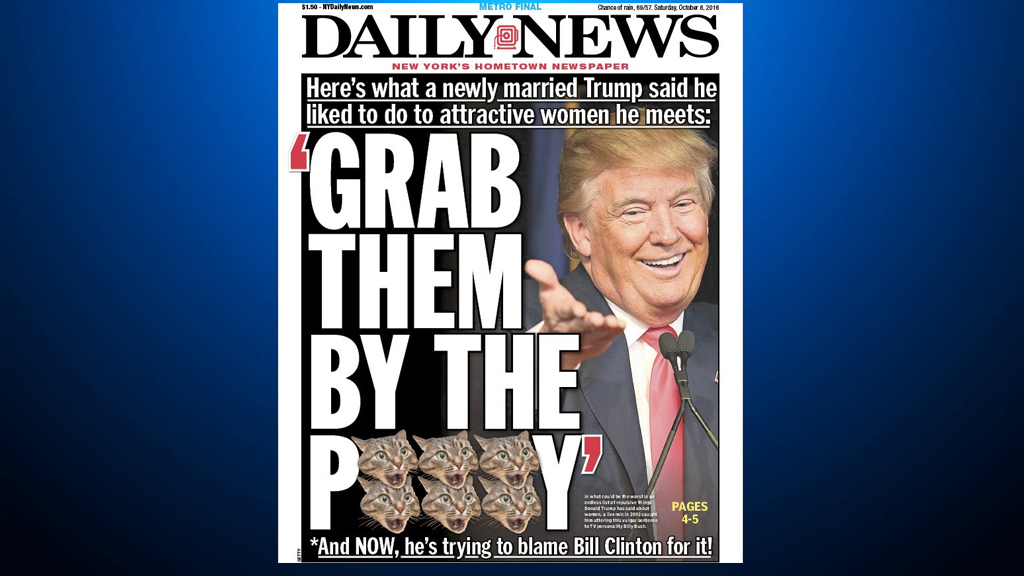 Also in the mix Friday: New questions about the Trump campaign's finances. With roughly a month until Election Day, the campaign has yet to schedule the $100 million in television advertising that his campaign boasted about just two weeks ago. The campaign has just half that amount scheduled, and late this week shifted ad money around rather than increasing its overall investment, suggesting a bit of penny-pinching even as the clock winds down.

That could mean his fundraising has slowed, and that he's less willing to write a big personal check as he once promised.

While Trump has survived numerous controversies that would have sunk other candidates, Friday's developments come at a crucial moment in the race. Less than five weeks from Election Day, Trump still needs to expand his support to overtake Clinton, and is struggling in particular with minorities and women.

The unearthed video of Trump's 2005 comments seemed likely to make any effort to win over women exceedingly more difficult.

In the tape, Trump is caught on a live microphone while talking with Billy Bush of "Access Hollywood." The candidate is heard saying "I did try and f--- her. She was married." He also uses graphic terms to describe the woman's body and says he frequently tries to kiss beautiful women.

In a statement shortly after the tape was revealed, Trump called his comments "locker room banter" and a "private conversation that took place many years ago."

"Bill Clinton has said far worse to me on the golf course — not even close," he said. "I apologize if anyone was offended."

Earlier Friday, in his meeting on border security, Trump said border agents have been told to allow immigrants into the United States illegally "so they can vote in the election." He offered no evidence to support his most recent claim that presidential voting may be tainted by fraud.

"They are letting people pour into the country so they can go ahead and vote," he responded, saying the story would be ignored by the media. He was responding to comments from Art Del Cueto, a vice president of the National Border Patrol Council, who told the candidate that officials in the U.S. are being directed to ignore immigrants' criminal histories and speed up citizenship applications.

After the round table at Trump Tower, National Border Patrol Council spokesman Shawn Moran said the discussion between the candidate and the union leader was misleading. Newly admitted immigrants are not permitted to vote, a right that is reserved for citizens.

Trump has repeatedly said he fears the election will be rigged and has made a hard-line stance on immigration a centerpiece of his campaign.

The New York businessman also weighed in on the contentious racially charged "Central Park Five" rape case, in which five black teenagers were convicted in the attack on a 28-year-old white woman jogging through the park in New York City.

In 2002, another man confessed to the crime and DNA evidence linked him to the crime scene. The five who were convicted received a $41 million settlement from New York State in 2014.

In a statement to CNN released Friday, Trump indicated he still thought the five teens were guilty.

"They admitted they were guilty," Trump said. "The police doing the original investigation say they were guilty. The fact that that case was settled with so much evidence against them is outrageous. And the woman, so badly injured, will never be the same."

Trump is scheduled to appear at an event Saturday in Wisconsin alongside House Speaker Paul Ryan, a lukewarm supporter of the Republican nominee. The AP asked several Ryan aides if the speaker still planned to appear with Trump, but as of Friday evening, none had responded.

© Copyright 2016 The Associated Press. All Rights Reserved. This material may not be published, broadcast, rewritten or redistributed.