NEWARK (CBS SF) -- A four-alarm fire that started in an industrial area of Newark Friday afternoon was under control Friday night and no injuries have been reported, according to the Alameda County Fire Department.

Crews responded to the blaze at AHG Recycling in the 6500 block of Smith Avenue around 3:45 p.m. Once on scene they found an outdoor fire burning palletized recycling materials.

"It was a very large fire that produced a plume of smoke that could be seen from miles away," Alameda County Fire spokeswoman Aisha Knowles said.

Police evacuated businesses immediately surrounding the fire and roughly 5,000 households in the area downwind were advised to shelter in place, according to Knowles. 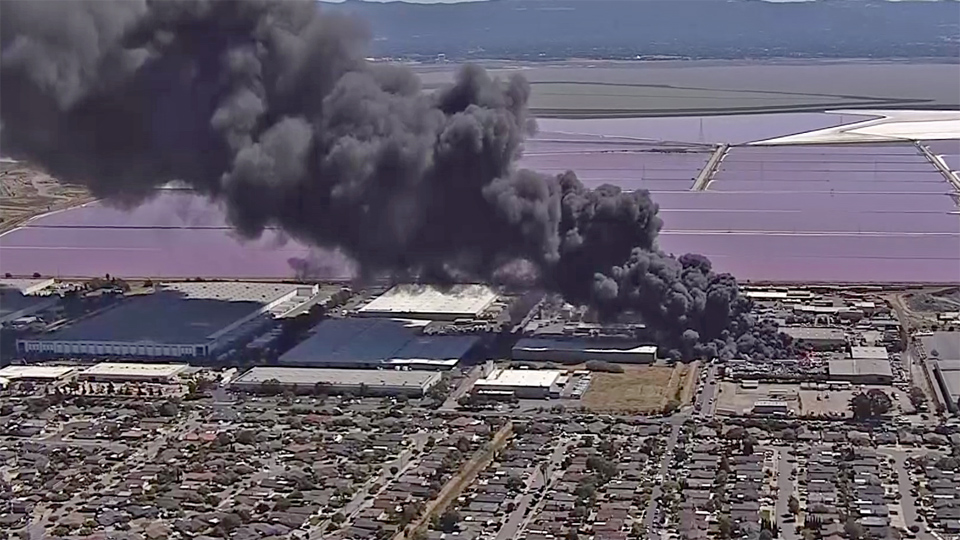 She advised residents in the affected area to remain indoors overnight and seek medical attention if they experience difficulty breathing.

Department of Public Safety officers in Sunnyvale said wind was pushing smoke from the fire their way around 4 p.m. They advised anyone sensitive to smoke who was outside and downwind to avoid long-term exposure.

The Federal Aviation Administration also issued a temporary flight restriction in the area after media helicopters above the scene began to affect fire conditions, according to Knowles.

By 5:30 p.m. the fire had been contained, an overhaul was in progress as crews remained on the scene putting out hot spots overnight. Personnel from the Bay Area Air Quality Monitoring District will be monitoring air quality as well.

The cause and origin of the fire remain under investigation.

Ninety firefighters responded to Friday's incident from a number of other fire departments including Fremont, Hayward, Piedmont, Alameda and Livermore-Pleasanton, according to Knowles.

TM and © Copyright 2016 CBS Radio Inc. and its relevant subsidiaries. CBS RADIO and EYE Logo TM and Copyright 2016 CBS Broadcasting Inc. Used under license. All Rights Reserved. This material may not be published, broadcast, rewritten, or redistributed. Bay City News Service contributed to this report